The Match! Amazon vs Walmart

In the blue corner, hailing from Bentonville, Arkansas, the world’s largest company by revenue, Walmart. In the red corner, out of Seattle, Washington, the nimble e-commerce money-making machine, Amazon. The match between these two retail giants is a clash of styles and generations. Here’s the tale of the tape. 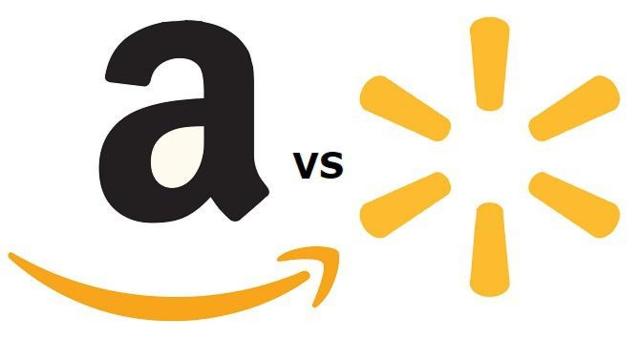 The world’s biggest supermarket company has embedded itself in the communities and collective consciousness of America for a half a century, much longer than its .com rival. With a 70% market share in the US, Walmart is an integral part of the weekly routine of millions of Americans. At global level, the group’s dominance is equally impressive. Thanks to annual turnover which exceeded $500 billion in 2018, the king of retail dominates Amazon, which made ‘only’ $232 billion last year. In terms of human capital, the Arkansas group also has a longer reach. It employs 2.2 million people against 350,000 at Jeff Bezos’ business. Nevertheless, Amazon is enjoying a growth spurt, 33 years Walmart’s junior, its turnover grew by 31% in 2018.

It’s a similar story when it comes to the two groups’ finances. Walmart, which has completed its 46th successive year of annual dividend-increases to shareholders, is as financially solid as they come. With $32 billion dollars in cash reserves, it outclasses its rival, which has 20 billion in mattress money. Amazon has a lot going for it financially, however, and has great expectations regarding growth which could put it on a par with Walmart financially in the near future. In 2017, Amazon’s market capitalization passed the symbolic $500 billion mark, an incredible feat which only the three other members of the GAFA and Microsoft had previously achieved. That of its rival is a stable and healthy $230 billion.

Walmart serves 275 million customers per week (14 billion annually) in 12,500 stores spread over 28 countries. It’s presence on the ground has no rival, although the growing gap Amazon to the top of the e-commerce sector threatens its retail monopoly. Despite the spectacular 67% growth in turnover from online sales, Walmart remains a tiddler compared to the group founded by Jeff Bezos. Today, e-commerce accounts for 10% of all retail industry sales, and when it comes to online retail, Amazon has a massive 47% market share, with Walmart’s 4.5% among a slew of also-rans. In the US, almost half of the public go to Amazon to search for a product and of the rest, 90% turn to Amazon second, if they can not find the item they are looking for elsewhere. To close this massive gap, Walmart has thrown money at the problem. In 2018, e-commerce and improving client service were the two main areas of spending. Walmart has brought in Google to help speed up progress in the e-commerce marketplace. Amazon has not stood still either. In 2017 it bought Whole Foods Market for $13.7 billion, giving itself an omnichannel presence too. Touché.

This move into bricks and mortar has seen Amazon take ownership of some 500 stores in America Canada and the UK. Previously, the firm’s strategy has consisted of pouring money into internal  innovation has stopped taking on debt. Amazon has earned the reputation for steamrollering the competition in various sectors by willingly selling at a loss to build up market share. Today, the advances it has made in terms of innovation and customer service would seem to preclude the emergence of an e-commerce rival, even one with pocket’s as deep as Walmart’s. Amazon’s 45,000 robots manage the flow of merchandise in its warehouses so well that only a minute’s worth of human work is necessary in order to process an order. Finally, Amazon is a real Aladdin’s cave with a mind-blowing 400 million products available and 189 million visits per year, 30 million of those via its smartphone app. Walmart offers a comparatively meager 4 million products. Walmart’s partnership with Google will allow it to offer voice-shopping on Google smart-speakers in the near future – a feature that Amazon already has via its Echo devices.

In the digital era, client-relations is one of the pillars on which success is built. In this area, the two rivals are on a quest for perpetual excellence. Via the Walmart Foundation, donations totaling $1.4 billion have been made and three billion free meals given out to disadvantaged communities since 2014. Amazon set up its own charity, Amazon Smile, in 2013. The website even gives away 0.5% of the sales price of each item it sells to worthy causes. In a country as patriotic as the US, Walmart has shown its appreciation for the armed forces by enrolling 250,000 veterans in a training scheme that leads to a career with the company. Not to be outdone, Amazon, which already has 10,000 veterans on the payroll, aims to recruit a further 25,000 between now and 2021. These figures amount to roughly 10% of both group’s workforces. The two groups also have extensive scholarship programs. All of this burnishes their reputations: the American Customer Satisfaction Index rates Walmart 74/100 and Amazon 82/100.

Conclusion:  Despite some fancy combinations, neither of our rivals land a knockout punch. Considering the scale and ambition of their projects, Amazon would seem to have the upper hand, but Walmart is changing with the times as well.