The Match! Paris vs London

With the Brexit imbroglio set to roll on for another six months, Paris is now more than any time in recent history a serious contender for the number one city in Europe. From tech, finance and real-estate to culture and tourism, Leaders League weighs up the merits of the cross-channel heavyweights in the latest edition of The Match! 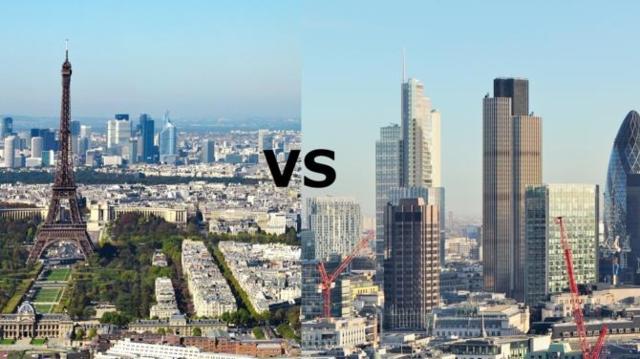 While Paris is the most densely populated city in Europe, with 21,000 inhabitants per square meter, it is tiny when compared to London. London covers an area of 600 square miles, while Paris is squeezed into 40 square miles. However, what the French consider Paris, foreigners theink of as central Paris. Paris intra-muros is effectively the ‘old town’ of a typical European city writ large. When comparing Paris and its attached suburbs with Greater London, the populations are almost the same, 8 million for London vs 7.5 for Paris.

When it comes to the tech industry, London and Paris are engaged in a fierce fight to attract the brightest and best startups and help them grow. Paris has around 1,400 startups while London has more than double that number, although due to their nature it’s difficult to give a precise number. One thing is certain, they seem to like the London ecosystem more. London has 22 unicorns (startups valued at more than a billion dollars) against just three for Pah-ree. But when it comes to dynamism, Paris is ahead, taking advantage of the hesitancy of foreigners to set up in London while Brexit remains unresolved, even if access to funding in London remains easier. Paris is now home to the world’s largest start-up incubator now too, with the opening of Station F.

The French capital is playing catchup when it come to its integrated transport network. London is served by six international airports (Heathrow, Gatwick, Stanstead, Luton, London City and Southend) to Paris’ three (Charles de Gaulle, Orly and Beauvais). The UK capital has almost twice as many bus lines, and more overland train lines, although Paris has an ever-expanding modern tramway network. In addition, Paris has 303 subway stations compared to the English capital’s 270, they are less spread out, and the cost of a single ticket is three times cheaper on the European mainland (€1.90 to £4.90). London has a significant lead when it comes to catching a cab, with 22,500 taxis in the London to just 17,000 in Paris.
Both cities have ambitious mass transit projects underway. With the Grand Paris metro project, the city of light will have four new metro lines connecting its suburbs to the city center between 2020 and 2030. The central section of London’s Crossrail tunnel is set to open later this year, connecting the west of the city to Canary Wharf. The new line will have 41 stations by the time it is completed in the middle of the next decade. Both the new Paris and London lines will significantly shorten travel times from the major airports to the city center.

It’s tempting to call it the new normal, except that, getting on for a generation now, London’s young well-paid professionals have been forced to flat share until their 30s. And when it comes to buying, the middle class have no choice, they have to look well outside the city center in boroughs like Lewisham in the south east or Haringey in the north. In 2018 the average price was €15,250 per square meter. Many professionals are being priced out of London altogether.
Although far from cheap, the price of housing in Paris is, at least, affordable. Although there are a few reasons why this may soon change. France being a highly centralized country, most private sector and administration jobs are located in the capital, and the density of the city, coupled with a ban on high rise buildings within its limits, prevents new accommodation from being built. In 10 years, the price of an apartment in Paris has gone up by 43% and now stands at 9,500 euros per square meter. Nevertheless, it is still easier to find accommodation in central Paris than central London.

If this were a contest between England and France, the latter would win this category hands down, but when it comes to their respective capital cities, things are a lot tighter. According to Mastercard, London was the second most visited city in the world in 2018 with 20 million foreign visitors, one place ahead of Paris with 18 million (Bangkok was the most visited, if you are interested). Of note, tourists spend more in London on average than in Paris.
However, Paris has three of the world’s top ten most-visited tourist attractions, (the Eiffel Tower, the Louvre and the Palace of Versailles). London has none.

In terms of culture, London has the advantage. The city has 240 museums to Paris’ 153. It has 380 public libraries to just 69 in Paris. London has six football clubs playing in the top tier, Paris just has PSG. London has a bewildering choice of concert venues, many more than Paris. One of the few cultural areas where Paris tops London is food and drink. Paris has 141 Michelin-stared restaurants to London’s 85.

According to the Economist magazine, London is the world’s second-best city to do business in, while Paris is the fourth best. London’s domination can be explained by the number of businesses present, around 872,000 in the Paris metropolitan area compared to 976,000 in Greater London.
According to the Economist, the gap is set to widen in the coming years, with London set to remain the second most competitive city in the world by 2035 with Paris slipping to seventh. In addition, the unemployment rate in France is around 9% compared to 4% in the UK. Corporate tax plays a part in hobbling Paris: 33% in France against 22% in the UK. Added to that, many foreign companies in Britain enjoy ‘UK non-domiciled’ status which means they are exempt from paying certain taxes. In terms of tax on private wealth, London is number one in the world, while Paris is down in 37th place.

Conclusion: Despite the uncertainty over Brexit, and Paris advances in many areas, London remains Europe’s most dynamic city. Even the French agree! There are around 400,000 French nationals living in London while just 8,000 Brits call Paris home.