Gender equality policies allow women to more easily reach the top. For proof, you need only look at the Nordic and Baltic nations. 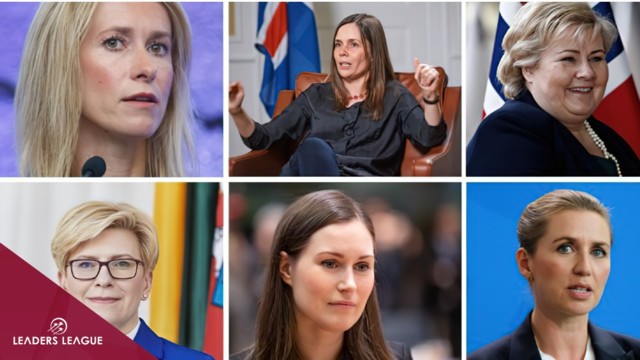 80% of the Nordic nations and two out of the three Baltic countries are currently being run by women. And far from being the prerogative of the progressive left, these women cover all strands of political opinion.
The Left-Green Movement’s Katrin Jakobsdottir has been in power in Iceland for the past two years, centrists Sanna Marin and Mette Frederiksen now lead Finland and Denmark respectively. On the right, ‘Iron’ Erna Solberg has ruled Norway since 2013.

Across the Baltic Sea, Ingrida Šimonytė has been in power in Lithuania since 2019 and the most recent member of the club, Kaja Kallas, became the prime minister of Estonia earlier this year. These days, when the regional heads of government get together in Oslo and Riga, it is Stefan Löfven and Arturs Kariņš who find themselves in the minority.
While the presence of so many female leaders in one part of the world is a recent phenomenon, it is the fruit of policies which have been in place for decades.

Fertile ground
When it comes to equal rights, the Nordic countries have long led the way and were among the first to grant women the right to vote. This year marks the centennial of women’s suffrage in Sweden, which came on the heels of Finland (1906), Norway (1915), Denmark and Iceland (1915).

The daughters of Freya have, since the 19th century, benefited from a great number of women’s groups associated with public and political life.
With full voting rights and powerfully lobbying groups, women in the Nordics have been able to play a full part in political life for many decades. Indeed Norway, Iceland and Finland have been run by women at various points since the 1980s.

Sweden can boast of introducing policies advancing parity as far back as the middle of the 18th century, at a time when merely raising the idea of giving women voting rights would have been met with ridicule in most European capitals.
When it comes to parental leave, the Swedes lead the way. Both parents together receive 480 days' parental allowance per child. In the case of multiple births, an additional 180 days are granted for each additional child.

This level of leave has proved crucial in helping ensure women’s careers are not derailed when they have children by ensuring the burden of childcare can be spread more evenly between the parents. A byproduct is that the birthrate remains significantly higher in Scandinavia than the European average. In 2018, the birthrate in Sweden stood at 1.8 as against 1.3 in Italy and Spain.
Far more than elsewhere, Nordic women have a high degree of activity in professional life, with 81% of Swedish women having a professional career as against 64% in France.

"The high level of parental leave in Sweden has proved crucial in helping ensure women’s careers are not derailed when they have children, by ensuring the burden of childcare can be spread more evenly between the parents"

It is therefore no surprise than in the lands of the Northern Lights women have been a common sight in the political sphere for decades. And these women are no flash in the pan. Vigdis Finnsbogadottir was the prime minister of Iceland for 16 years from 1980 to 1996 and Tarja Halonen was president of Finland from 2000 to 2012.

The upside of Communism
Looking at the Baltic states, the situation is different since these countries were under the dominion of the Soviet Union for much of the 20th Century and hardly beacons of democracy. Yet to give the USSR its due, under communism everyone was encouraged to go to school and get and education and so both boys and girls were able to aim for high-level careers. Indeed, in contrast to many parts of the world, women in the Soviet socialist republics could and did hold important public functions.

A large number of former Iron Curtain countries have, or have had, female leaders, including Ukraine, Georgia, Slovakia and Moldova. Even in Belarus, where Alexander Lukashenko has ruled uninterrupted since 1996, the main opposition figure is Svetlana Tikhanovskaia.

The presence of women in the boardroom and corridors of power is nothing new in Nordic countries and, here, sexist pronouncements have long been beyond the pale. Indeed, when a prominent female politician is attacked for the way she looks, there is often a strong backlash, as was the case when Finnish magazine Trendi criticized Sanna Marin's penchant for plunging necklines, accusing her of spending more time on her appearance than on fighting the spread of Covid.
The heavy criticism the magazine came in for demonstrated that, while prejudice against female politicians may still exist, it is an increasingly isolated phenomenon.

The picture is not quite as rosy in the Baltic states. In April 2019, when president Kersti Kaljulaid (yes, Estonia has a female prime minister and a female president) charged Kaja Kallas with forming a coalition government, she came away empty handed, complaining that “the male ego of centrist and conservative politicians would rather cling to their positions than keep the far right from gaining power.” While the gender aspect may have played a part, it is unlikely to have been the main issue for the collapse of talks.

And elsewhere?
The healthy number of women occupying high office in these northern European countries stands in sharp contrast to the global picture. For all the attention given to premiers like Jacinda Ardern and Angela Merkel, these figures are outliers. According to the World Economic Forum’s latest Gender Gap report only one in ten countries are run by a woman.
Countries such as The US and France have failed to elect women when they had the chance and the fact that much pomp and ceremony will greet the day when these two nations eventually do elect a woman president just goes to show how great the Nordics and Baltics feat of making such a happening commonplace has been.

The fact that the same report notes that 21% of ministerial positions are currently occupied by women gives grounds for optimism however ─ after all, today’s ministers are often tomorrow’s prime ministers ─ but the road to true gender parity in global politics is going to be a long one, and won’t be achieved for another two centuries according to the World Economic Forum. The Baltic and Nordic nations have given us a glimpse of the future, how long that future takes to arrive is up to us.