Since it came into being in 1948, the World Health Organization has played a vital role in improving systems of healthcare around the globe. Here are five of its biggest success stories. 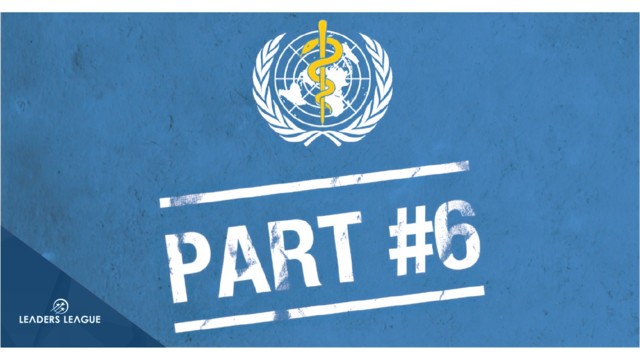 The Reduction in Malaria Transmission

With 219 million people infected and 435,000 deaths in 2017, malaria, transmitted by mosquitos, is the world's most dangerous parasitic disease. In 1955 in Mexico, during the WHO’s 8th World Health Assembly a billion dollar programme aimed at eradicating the disease was launched. The vaccines of the day were largely ineffective, but through a combination of insecticide spraying, drug therapy and environmental engineering, malaria was virtually eradicated from the developed world by the 1970s. Currently 80% of cases occur in 15 sub-Saharan countries and India. Thanks in the main to the efforts of the WHO, it is estimated that the mortality rate now stands at 45% globally and 49% in Africa. At world level the WHO operates a strategic prevention-based plan to combat malaria in the developing world.

The Eradication of Smallpox

In 1950 smallpox was responsible for the deaths of over two million worldwide. A highly contagious disease, it ravaged Africa and Asia in particular. Transmitted human to human, its symptoms included fever, nausea, headache, vomiting and abdominal pain. As it develops, body temperature drops and the face, arms and chest develop a severe rash. The World Health Organization estimated that 80% of the world’s population would need to be vaccinated if the disease was to be eradicated. The vaccine programme bore fruit, and on May 8th 1980 the global eradication of smallpox was officially declared by the organization.

The Fight Against Tropical Diseases

No less than 12 infectious tropical diseases, including River blindness and trachoma are being targetted by the WHO. Endemic or epidemic, the have a disproportionate effect on the world's poor. According to the WHO they affect one in six people in the world, including 875 million children. They are responsible for 500,000 deaths each year in Africa alone. The WHO has put into action several programmes designed to train medical personnel, educate local populations, provide equipment, distribute medicine, such as Ivermectine, and carry out treatment. NGOs and humanitarian organizations such as Helen Keller International, work in tandem with the WHO to improve the lives of people living with tropical diseases.

Hepatitis C is characterized by an inflammation of the liver and, according to the WHO, more than 80% of people living with hepatitis C do not have access to prevention, testing or treatment services. The reason? The exorbitant cost of treatment. In 2014 the drug Solvadi arrived on the market in France at a cost of €40,000 per patient, which had to be absorbed by the French state healthcare system. The price did eventually drop with the arrival of generics, which made the cost of treatment more manageable for sufferers. The WHO called upon countries to do everything in their power to ensure cost was not a barrier to patients receiving for hepatitis C and to facilitate access to treatment for those with the disease. India and Pakistan answered the call, delivering treatments that were free or at an extremely low price.

In 2016 there was a serious outbreak of yellow fever (a viral infection transmitted by a bite from infected mosquitoes) in the Democratic Republic of Congo, which subsequently began showing up in other countries around the world, including China. In 2017, the World Health Organization resolved to establish a strategy to quell the epidemic entitled EYE (Eliminate Yellow Fever Epidemics). The objectives of this strategy were to protect at-risk populations via preventative mass-vaccination campaigns. Unicef, a partner in this endeavour, supplied the vaccinations. Health regulations were reinforced in 40 countries around the globe. There has been no new outbreak of yellow fever since.