Founded in 2015, the Centro Mexicano Pro Bono is dedicated to providing legal advice to the most vulnerable sectors of the country through an extensive network of companies and law firms that comprise it. In this interview, its executive director, Ivette Montero, tells us about the projects they have been carrying out and the challenges Mexico still faces. 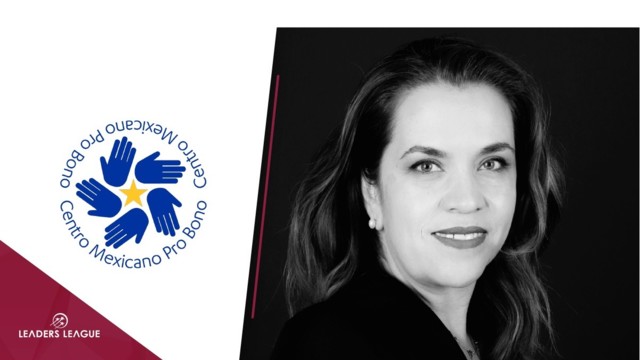 Leaders League. What is the Mexican Pro Bono Center and what are its activities?

Ivette Montero. It is a non-profit civil society organization dedicated to managing pro bono work in our country, Mexico. We function as a liaison between those who are in need of legal help and lawyers from law firms or companies who are willing to help for free. We also look for public interest opportunities where we can present collaboration projects with lawyers in different areas, whether public policy or public interest studies, including at the Latin American level with the pro bono network of the Americas.

Could you comment on some cases in which you have participated and that you consider have had an impact on Mexican society?

In collaboration with Estandares Pro Bono Mexico, which is a Mexican pro bono network formed by other clearinghouses, law firms, and bar associations, we have generated a legal guide on the effects of Covid, because a few months ago different provisions were issued by the federal and local government that generated a lot of confusion. What we did was a kind of translation of all those provisions by items and we generated this guide with a basic language addressed to all citizens, which had a highly significant impact. The National Autonomous University of Mexico also participated in the process and we received more than 200 thousand consultations from citizens.

We are also working on public policies for the regulation of social enterprises, which are not yet regulated in Mexico. The change of legislature delayed the progress on this issue a little, but we hope that the law initiative will be approved in 2022.

Has entrepreneurship increased in Mexico in the post pandemic landscape?

Last year the gestation of businesses came to a halt but afterwards there was a great need for legal assistance to be provided to micro-entrepreneurs due to the economic situation caused by the pandemic. Certain terms had to be renegotiated, basic support had to be provided so that they could continue their activities or close some obligations.

In 2001 the economy has picked up again and therefore we have had a significant increase in the number of projects taking place. We have witnessed an interesting dynamic of support for social entrepreneurs and micro-entrepreneurship in the country and there are now many requests for help coming from this sector.

Which are the law firms or independent institutions that are part of this network?

Pro bono service is still at an early stage. The pandemic reactivated the willingness of lawyers to provide social support. In its aftermath, we have seen many lawyers become interested in supporting and getting involved in pro-bono activities.

We also do projects with in-house lawyers from companies, according to their legal expertise. You could say that they are tailor-made projects according to the responsibility that their legal activity may have with the company. They usually support a lot in training with civil society organizations and entrepreneurs.

In terms of the functioning and efficiency of public institutions, what do you think are the main challenges Mexico faces as a country?

The great task we have in front of us is to improve access to justice and this leads us to reflect on the phenomena that affect access to justice, such as impunity and corruption. Despite the fact that the government has taken steps to put in place a robust anti-corruption system, the hoped for results have not yet been achieved.

Corruption undermines citizens’ trust in the justice system, and thus their willingness to file complaints Eighty-five percent of citizens perceive the justice system as corrupt. This is an issue that we have to address, and it is no easy task. We have three Bar Associations in Mexico that have launched a program to support the strengthening of the rule of law. In conection with this accion, we have provided a lot of training in this regard, both to individuals and organizations.

Are you working on other projects in this area?

With almost 48% of the population living in poverty, we work to provide access to justice to the most vulnerable people in the country,. Once people understand that access to justice is linked to economic means and that disadvantaged people do not have the resources to pay for a lawyer, they understand the importance of these projects, and providing them with a lawyer on a pro bono basis.

In addition, we want to implement a network of pro-bono lawyers that can help address gender-based violence. However, we are aware that, this being a very complex issue for them,  training for lawyers will be required so that they can provide legal and psychological services on gender-based violence  in an adequate manner.

It is also important to sow the pro-bono seed among law students. We hold conferences for students from different universities and, specifically, we have a program called "the pro-bono challenge", which is a contest aimed at law students with, the idea that they identify a social problem that can be solved through the law.

Nowadays we have many corporate tools but the social part is often not developed. Many students begin their studies with the intention  of focusing on social justice, but this often gets lost along the way. I believe that all lawyers have that social streak, we just need to develop it a little and cultivate it in the students. Doing pro-bono work is part of the social responsibility of lawyers, and provides a great opportunity to get back to to the social origins of law.