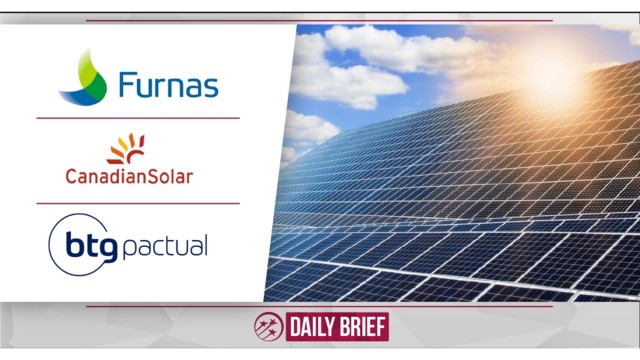 In November, one of the largest solar power companies in the world, Canadian Solar, announced a 12-year contract with leading Latin America investment bank, BTG Pactual, after being awarded with two enterprises in a private auction by Furnas Centrais Elétricas, and aims on implementing a total of 862 MWp in solar power projects in Brazil by 2023.

As BTG manages one of the largest power trading business in Brazil, Canadian Solar agreed to supply solar power for commercialization from a 170 MWp cluster that will be located in the state of Minas Gerais. Constructions are set to begin in 2021 and are expected to go into commercial operation by the end of 2022.

Furnas, on the other hand, being a subsidiary of Eletrobras, agreed to purchase solar power from Canadian Solar' upcoming projects in Ceará and Piauí for at least 15 years. They will start construction in 2022 and aim on going into commercial operation by 2023, with a joint capacity of 692 MWp.

Canadian Solar is currently represented in Brazil by renowned full-service law firm Trench Rossi Watanabe, that advised the company in all stages of its new deals, including preparation, negotiation, and contract execution.

"We are pleased to partner with BTG and Furnas to deliver clean solar energy to Brazilian consumers. I am also proud of our team's great work in expanding our leadership position in the solar power project development market in Brazil. After the 274 MWp in corporate PPAs that we signed in June, the volume of projects secured in this PPA and auction is the largest in Canadian Solar's history, and it has increased our backlog of solar projects in Brazil with PPAs (or equivalent) to almost 2.2 GWp”, stated Shawn Qu, CEO of Canadian Solar.