CEO of the Munich-based insurance giant since 2015, Oliver Bäte has expanded the interests of the group in Eastern Europe and East Africa, while ensuring Allianz leads the fight to protect the environment. 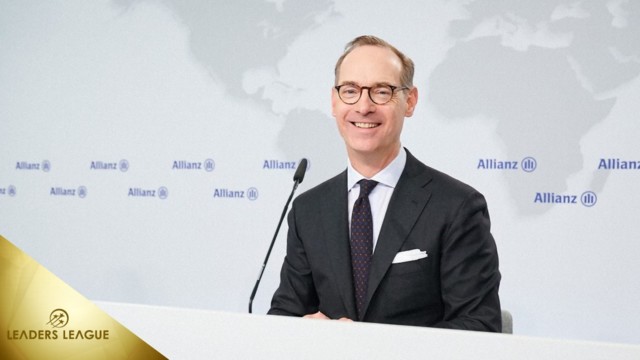 The insurance industry values stability more than most; chaos leads to claims, after all. In its entire 130 years of existence, Allianz has only ever had 10 CEOs. The latest man to occupy the position, Oliver Bäte, has been in the role for the past six years, and the way things are going he won't be bringing down the Allianz boss batting-average – Bäte's current contract runs through 2024.

The 56-year-old’s stewardship of Allianz has gotten off to a good start. His first five years in charge have seen Allianz’ value rise by 73% and turnover increase by 12% to €140.5 billion. And despite a coronavirus-complicated 2020, “Allianz has begun 2021 with excellent results in all sectors of activity,” remarked the Bensberg native, on the announcement of Allianz’ Q1 results.

You wouldn’t know it from the chorus of praise coming out of Allianz HQ, but Bäte was something of an unknown quantity when he was given the nod to succeed Michael Diekmann. Unlike his predecessors, he was not promoted from within, but prized away from McKinsey, where he rose through the ranks after joining the company as a fresh-faced graduate in 1993.

Made in the USA
After earning an MBA from New York University, he got a job at McKinsey, learning the ropes for a couple of years in the Big Apple before returning to his homeland to further the interests of the leading management consultancy. In 2003, Bäte became the head of McKinsey’s European insurance and asset management department, a position he would hold until making the switch to Allianz in 2008.

As the COO of Allianz, Oliver Bäte entered a company in the process of disposing of Dresdner (a €20bn 2001 purchase, which had proven to be an extremely costly error) not to mention one bracing itself against the impact of the Great Recession. A year later he became the firm’s CFO and, prior to becoming CEO, was responsible for the firm’s insurance business in France, Benelux, Italy, Greece, Turkey, and for its Global Property & Casualty center of excellence.
Through these various roles, he got to know the company from top to toe and soon his name was being mentioned as a potential future boss of the company.

Climate change strategy
Passionate about protecting the environment – a subject of financial as well as ethical importance for insurers given the massive payouts they are obliged to make whenever there is a natural disaster, such as last July’s flash floods in western Germany, which led to $8 billion in insurance claims – Bäte was one of the first to buy BMW’s electric powered sedan when it came on the market.

Through this and numerous everyday eco-friendly gestures, the boss of Europe’s biggest insurance company leads by example. Significantly, the group aims to become carbon neutral by 2050 and has committed to ensuring it is 100% powered by renewable energy by 2023. “This is one of the main pillars of Allianz’ effort to fight global warming,” stressed the CEO of the latter commitment.

In terms of M&A, Bäte has overseen a number of strategic acquisitions of late. At the beginning of 2021 Allianz acquired Aviva’s Polish business for €2.5 billion, a purchase that should see the German company double its revenue in Poland and lead to further growth opportunities in central and Eastern Europe. The firm also recently acquired a majority stake in Kenya’s Jubilee General Insurance, signalling its interest in the East African insurance market.

And with Allianz’ first-ever global private debt fund already raising over 500m, Bäte is sure to give the green light to more investments soon.