The saviour of PSA, Carlos Tavares has been at the head of the automobile group since 2014. Now boss of Stellantis following 2020’s merger with FCA, he steers the fortunes of the world’s fourth-biggest car manufacturer. 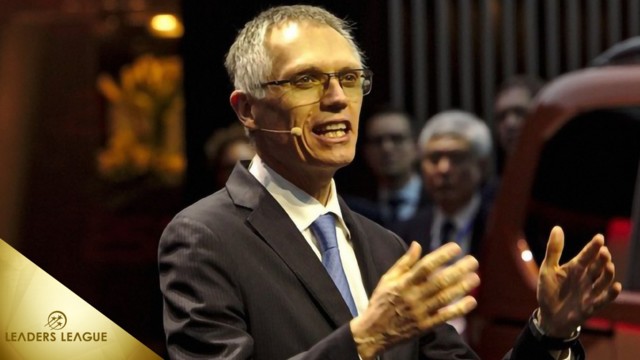 It was to general surprise that Carlos Tavares took over at Peugeot in 2014 after spending three decades at gallic arch-rival Renault. A keen racing driver, the Portuguese began at the back of the grid, with the group on the point of bankruptcy.

In just three years he had the group back in the black, thanks to a strict management plan that encompassed reducing the number of models PSA produced, and the cost of developing them, as well as embarking on a round of staff cuts.

In 2017 Tavares dipped his toe in the M&A market with the purchase of Opel, ‘buying low’ a company that had been in deficit for the previous 20 years. Under his leadership, PSA improved its profit margin, with a price point for his company’s vehicles that was more attractive to the general public. These measures bore fruit, and in the first quarter of 2020 PSA became profitable once more.

When it comes to sustainable mobility, Tavares is doing his part to save the planet

As Tavares put it in an interview with Leaders League, “A leader's ultimate satisfaction comes from driving a group of individuals towards an ambitious, perhaps even seemingly unrealistic, goal, and from experiencing the shared pleasure of reaching or even surpassing this goal.”

Then, of course, the coronavirus pandemic hit and the industry was plunged into crisis as countries closed their borders and stay-at-home mandates were issued across the globe.

Yet, despite a 67.5% decline in net profits to €595 million that coincided with this event, the group was still able to maintain an operating margin of 2.1%, a result which for Tavares, “demonstrated the resilience of the group and was just rewards for six years of intense work.”

The orchestrator of the PSA-FCA merger
The merger between Tavares’ group and Turin-based auto-giant FCA, owner of the Fiat and Chrysler brands, went through in June 2020. Christened Stellantis, it appointed the 63-year-old as its first CEO.

The son of a French teacher and an insurer who grew up in Lisbon, Tavares was now in charge of an auto company only surpassed by Volkswagon, Toyota and Renault-Nissan-Mitsubishi in terms of size, one that had 8.7 million vehicles on the world’s road and turnover in excess of €167 billion.

When it comes to sustainable mobility, Tavares is doing his part to save the planet. His group was the No.1 register of patents in France in 2019 across all industries and PSA many of those patents are for technology that seeks to reduce CO2 emissions, as well as those linked to connected objects and assisted driving.

And although he has labelled as a “diktat” the European Union directive that compels the continent’s car-makers to reduce CO2 emissions from new cars by 40% from now to 2030, he is nevertheless determined to make a difference by transitioning to electrically powered vehicles.

With Tavares at the wheel, PSA is in for the drive of its life.