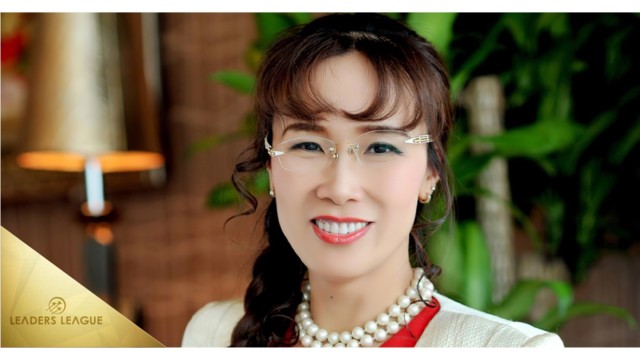 The 50-year-old Hanoi native is the only woman to have started and run her own major commercial airline and is Southeast Asia’s first self-made female billionaire.

It has only taken a decade for Vietjet, the airline founded by Nguyen in 2007 which flies to some 120 Southeast Asian destinations, to become a serious player in the aviation industry. In 2017, the airline had a successful IPO on the Ho Chi Minh City Stock Exchange, with a capitalization of 1.4 billion dollars. A year later Vietjet accounted for 46% of all passenger traffic in Vietnam and in 2019 broke the 25 million passengers-per-year mark. Behind this success lies an incredible woman whose acute sense of business is no recent development.


Spasibo Russia
Aged 21, Nguyen made her first million during her second year of university in Moscow, after hitting upon the idea of importing Asian products into Russia, which proved to be a real money-spinner. Armed with a masters in economic management from the D. Mendeleev University of Chemical Technology, she returned to the land of her birth, adding to her wealth by investing in the private banking and real estate sectors, before launching her airline. “As the first private airline in Vietnam, we have made many positive changes to the aviation sector, enabling many to fly for the first time,” stated Nguyen in an interview in 2017, who puts her success as an entrepreneur down to her deep understanding of finance and sound economic management.

"Despite the devastating effects of Covid 19 on the aviation industry, all signs point to Vietjet continuing to flourish"

Business models
Travel companies and airlines have long espoused the adage ‘sex sells’ and Nguyen herself unashamedly embraces the concept. Vietjet made a splash in 2014 with a photo of bikini-clad models posing in front of one of the company’s jets giving a military style salute. The airline is also famous for having stewardesses in swimsuits on certain flights and featuring models in red and yellow bikinis in its annual company calendar.

The rapid rise of Vietjet – which now carries more passengers per year than the country’s national carrier, Vietnam Airlines – has made Nguyen a very wealth woman indeed. Forbes puts her personal fortune in 2020 at $2.2 billion. And despite the devastating effects of Covid 19 on the aviation industry, all signs point to Vietjet continuing to grow in its populous regional market over the next decade.

Why? Well, for one thing, because of the robustness of Vietjet’s business model. Like many low-cost operators, Vietjet’s success is based on getting the maximum number of bums on seats on every flight, which it does by offering market-beating airfares. To do so, like many of its low-cost counterparts, the airline charges for a range of services such as additional baggage and onboard meals. But perhaps the main reason for optimism is because demand for air travel in Asia, Vietnam included, is projected to go through the roof in the coming years.
For Nguyen, it seems, the only way is up.