The private equity sector is booming in Spain, as in most of Europe. Although there are some potential storm clouds on the horizon, participants in Leaders League’s recent Thought Leaders Roundtable in Madrid remain bullish on the sector for the future. 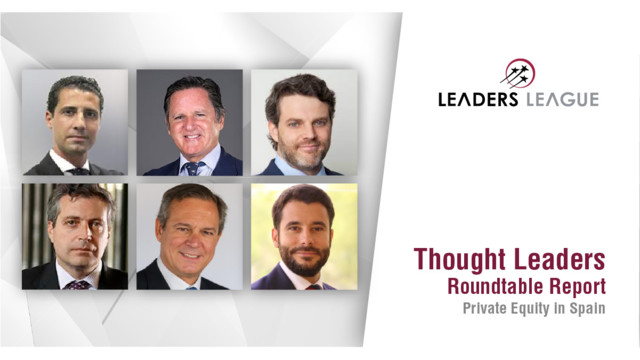 The European private equity sector has already set new record in 2021, with almost two months left to go in the year. The number of deals, deal value, and exit value are all blowing past previous records, assuaging any doubts about the sector rebounding after the pandemic. Spain has been no exception, according to a roundtable of thought leaders hosted by law firm Allen & Overy and is set to continue to see exceptional growth in PE for the near future, despite some potential challenges on the far horizon.

One reason for the boom in activity is the amount of cash that funds have raised, which now has to be deployed. Since the second half of 2020 through the summer of 2021, investment activity has been strong across all sectors, including private equity, according to Íñigo del Val, partner in Allen & Overy’s private equity advisory practice. “Despite Covid, they saw that the pandemic was coming to an end and started doing deals. The mid-market has been booming,” he said, adding that he expects this trend to continue.

Álvaro Mateo Sixto, co-head of the venture capital practice at Gómez-Acebo & Pombo, agreed the current trend still has legs. “There’s a lot of dry powder,” he explained. Up to now, “industrial players have not been very active, but they may start to be in 2022, so this may entail some changes in the market dynamics.”

Pablo González Mosqueira, partner at Pérez-Llorca, said he also expects the trend to continue into next year. “Deal flow will remain high through the first half of 2022. There’s a lot of dry powder and pressure on managers to deploy it.”

One of the reasons for the high level of liquidity in Spanish private equity at the moment is due to the strong track record the sector has established, Alejandro Ortiz, partner at Linklaters, explained. “We’ve been through a long cycle where PE investments have been very successful. They’ve been getting good returns for a very long time.” This has attracted new entrants to the market, such as infrastructure funds, a trend which is still growing. Recently, Ortiz said, the sector has seen interest from pension and sovereign wealth funds from Canada, Australia, the Middle East, and Asia. “Spain wasn’t such a usual market for them,” Ortiz said. “Now they’re very common.” Canadian pension funds, for example, are becoming particularly active in Spanish private equity, particularly in the energy and new technology sectors, he added.

While some activity may be part of the broader trend in European private equity, Spain also has several advantages that make it an attractive destination for private equity flows. “Spain has been resilient across a number of sectors,” Gonzalez said, which has helped create a strong pipeline of deals.

In addition, “Spain is a reliable country with a good reputation for the rule of law, despite some minor obstacles,” Joaquín Echanove, partner at DLA Piper said. The country’s infrastructure and fiber to the home are better developed than other parts of Europe, he added. “There are also a number of mid-sized companies with huge potential in Latin America, and Spain is seen as the perfect bridge to get to them” he said.

Ortiz expanded on that point. “Spanish companies are seen as a door to Latin American countries.” Spain also has less penetration by private equity than other countries, making it an attractive destination. “The economy [in Spain] is also growing faster than other European countries, and we have very strong companies and particularly good management teams, with very good, professional advisors.”

Francisco Martínez Maroto, partner at Cuatrecasas, added that “productivity is higher in Spain, partially as a consequence of lower salaries,” compared to other European labor markets, making Spanish companies even more attractive to PE funds. “Valuations are also lower than in other countries,” Mateo added, “and we still have less consolidation in certain sectors.” The possibility to reap the benefits of consolidating still-fragmented sectors may be another advantage for the country when it comes to attracting private equity funds, he explained.

Besides high market fragmentation and low valuations relative to the rest of Europe, the number of mid-sized companies represent yet another of the country’s advantages, del Val said. “Spain is a good example of the mid-market. Funds can acquire mid-market companies and sell them for big tickets.” As a result, many firms adopt a buy-and-build strategy when it comes to acquiring mid-market Spanish, González said. “The opportunity needs to be scalable,” he said, with private equity firms looking to scale their portfolio companies into much larger players.

“There are strong and good Spanish companies,” Ortiz agreed, that can serve as a basis upon which firms can build names that eventually expand beyond the country’s borders. “After one or two cycles in a private equity firm’s portfolio, some of these companies are becoming global or European champions.”

Private equity is maturing in Spain

These success stories are also helping to raise private equity’s profile among business owners. “The more that happens, the more founders will be open to private equity,” del Val said. While in the past, Spanish entrepreneurs may have taken a skeptical view toward private equity funds, seeing them as little better than predatory investors, the sector’s track record is changing people’s minds. Now, “the perception in the market is that PE firms don’t just provide money but have the capacity to create a complete growth plan. In Spain, there have been excellent examples of PE investors creating value, such as by improving management teams or introducing new opportunities,” Echanove said. In competitive processes, this has sometimes led to sellers preferring to go with investors that are able to submit a more compelling strategy for future growth. “Sometimes, the firm that wins the deal is not the one that offers the highest price, but the better plan,” Ortiz said.

Nevertheless, valuation continues to be a major issue, with the historic levels of liquidity giving rise to more competitive bidding processes and higher selling prices. “We are seeing a lot of competition,” del Val said. “Competition between funds is crazy right now.”

Even firms that might see themselves as the obvious choice as a buyer are sometimes finding themselves blindsided by offers from a third party that come in over the top, Ortiz said. “We see clients that are convinced they’re going to win, that think they’re the natural buyer, and are also offering an unbeatable price. Then someone comes in bidding much more.” This has led to wider margins between offers in auction processes, del Val said. “Offers used to be closer in auctions. The difference between the winning offer and the next highest can now be like 20%. And bidders are taking the decision to bid higher during the due diligence phase.”

Challenges on the horizon…

However, the success of the Spanish private equity sector does not mean there aren’t potential challenges to look out for. “It can be tough for private equity firms to find sizeable targets,” del Val said. “And tough to find opportunities to expand, compared to countries like the US.”

The country is also not immune to the global trends that could negatively impact the economy. “We need to keep in mind inflation, the energy market, and logistics,” Mateo said. “Inflation could have an effect on the market in general.”

Martínez agreed. “The main concern is inflation and what the central banks will do. Analysts still believe inflation is being mainly driven by demand for goods rather than services as a consequence of the restrictions. It’s a bit surprising how rapidly demand has bounced back, which is what has created the supply bottlenecks. If inflation remains high, the central banks may raise rates.”

González said these issues could have an impact on deal flow. “The pipeline is good. But disruptions in the supply chain, costs of materials and costs of energy MAY EVENTUALLY impact investment decisions and decisions by owners on whether to divest.” Healthy companies with balance sheets that are strong enough to weather the rise in input costs may choose to put off a sale for several years in order to achieve higher sale multiples. “It has yet to be seen how these effects will impact or allow companies to pass through costs to clients,” he said.

Nevertheless, central banks are unlikely to make dramatic changes anytime soon, Martínez said. “Most analysts say this won’t happen in the short term. In their opinion, the ECB won’t raise rates until 2023 and the increase in rates won’t be high in any case so real interest rates will still be negative. That means private investments and alternative assets such as private equity still be very attractive.”

“There are still a lot of uncertainties, such as ship transport and semiconductors,” Echanove observed. “But there are also opportunities.”

That is particularly true among infrastructure investments, such as towers and telecom, which are starting to attract valuations and multiples higher than normal for the asset class, according to del Valle. In addition to higher multiples, Echanove pointed out that we are also seeing entirely new concepts in infrastructure, with new businesses arising alongside more traditional ones.

In some cases, the enormous amount of liquidity sloshing around is driving funds to explore new opportunities, Mateo said, with investors such as Macquarie doing a regional fiber deal in Spain. “They’re looking for opportunities that were not in their target areas a few years ago,” he explained. Some funds are also setting up new vehicles to allow them to take advantage of opportunities in Spain, despite the small relative size. Some private equity funds are looking at investing in earlier stage opportunities. “Not venture capital funds, but VC-like in terms of investing in earlier stages. Some of them are setting up new funds to approach these opportunities.” This strategy is also being seeing at some LBO funds, which are also “trying to adopt a different approach to take advantage of the smaller tickets,” Martínez said.

The sector is also seeing more dual-track processes than before, according to Ortiz, often ending with a sale to a PE firm rather than a public listing. “Currently, PE firms are able to offer a better price,” he said.