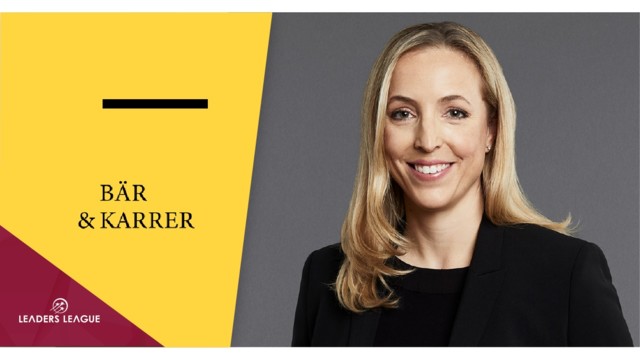 Swiss law firm Bär & Karrer announced this February the promotion of Nadja Jaisli Kull to the position of co-head of its Arbitration practice. She will be taking over the role from Daniel Hochstrasser who was co-head for more than 15 years at the firm. Nadja will co-lead alongside partner Pierre-Yves Gunter.

Nadja joined Bär & Karrer in 2006 as an associate. She was promoted to partner in 2014. Her work has made her a reputable counsel and arbitrator in the Swiss market. She specializes in international commercial arbitration and litigation. Her experience includes representing clients before Swiss and international courts. She has worked primarily in the banking and finance, pharmaceutical, and transportation industries.

Being a member of the Board of the Swiss Arbitration Association (ASA), Nadja regularly speaks and publishes content related to international dispute resolution. She has been ranked among the largest ranking agencies around the world, typically leading the market in the fields of arbitration and litigation.

Nadja studied at the Universities of Zurich and Geneva. She then went on to work as a law clerk at the District Court of Horgen. After being admitted to the Zurich bar in 2005, she later decided to study at New York University. Consequently, she was admitted to the New York bar but does not currently practice there.

As for her memberships and public offices, Nadja is a part of the Zurich Bar Association (ZAV), German Institution of Arbitration (DIS), and ArbitralWomen. She can speak German and English.

"Nadja is an excellent choice as Co-Head of our Firm’s Arbitration practice. She is well respected among her clients and peers as well as within the firm,” senior partner Susanne Schreiber said. “I wish her a lot of success in her new role."