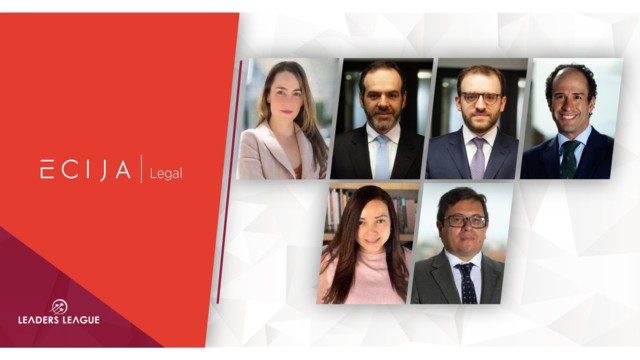 The announcement comes two months after the firm opened offices in Argentina, making it the Spanish firm with the largest presence in Latin America, with 27 offices in 14 countries in the region.

The news also comes less than a month after the firm announced the addition of a new partner in its Costa Rica office, Álvaro Quesada.

“This new movement of the firm in Latin America responds to the growth pattern of the firm in recent years, based on a disruptive model in the legal sector, which combines owned offices and offices under management ownership, a model that departs from the traditional formats of law firms, which has been decisive in the exponential growth of ECIJA,” the firm said.

“ECIJA's new office in Colombia is a full-service law firm, one of the leading firms in the market in the competition, TMT and entertainment practices,” the firm added.

The Colombia office also stands out for its intellectual property, corporate and M&A, national and international arbitration and public policy areas, and has extensive experience in banking, energy, retail, utilities, urban and rural real estate, and pharmaceuticals.

ECIJA's team in Colombia adds six new partners and 30 professionals to the global structure of the firm and will be led by Pablo Márquez, Julio Castañeda, Carlos Hugo Ramírez, Patricia Renjifo, Camilo Ramírez and Lorena Garnica.

“This team has first-class professional credentials, having been part of, among others, the competition authority and economic regulatory bodies in Colombia and, in turn, from the private sector, holding positions as directors of legal counsel for major multinationals in different sectors,” the firm said.

Hugo Écija, founding partner and executive chairman of the firm, said: "Latin America has been and is a priority for the firm. With the new opening in Colombia, one of the most important legal markets in the region, ECIJA not only manages to position itself as a Latin American leader, but also strengthens its office structure to accompany its clients in their internationalization process.”

"We are very excited about this move, which will allow us to make a quantitative and qualitative leap in our services,” Pablo Márquez, managing partner of ECIJA Colombia, said. “Both firms share a strong expertise in information technology, media, telecommunications and intellectual property, which will strengthen the firm in the region."

ECIJA is one of the Ibero-American firms that has grown the most in recent years, having incorporated a total of seven firms into its structure since 2020, entering Brazil, Mexico, Ecuador and Argentina.

According to the president of ECIJA, the integration with MBCR is an important step in the Firm's internationalization strategy and will be followed by others that are expected to be announced in the coming months.