Seven Inspirational Leaders Who Rose From the Brink of Failure

It has been said that, “success breeds success.” However, many inspirational leaders only found their success after suffering great failure and learning how to turn this failure into a fierce determination to succeed. Leaders League has hand-picked seven inspirational leaders who refused to let failures stop them from conquering their fields. 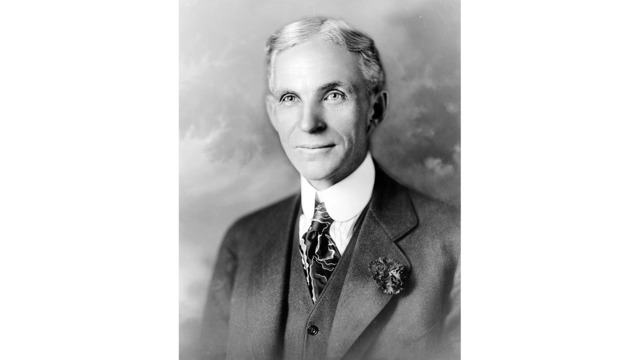 By Hartsook, photographer. - Library of CongressThis image is available from the United States Library of Congress's Prints and Photographs division under the digital ID cph.3c11278.This tag does not indicate the copyright status of the attached work. A n

The Ford Motor Company is the fifth largest carmaker in the world and a household name. However, its founder Henry Ford was not blessed with immediate success. In fact, Ford’s first endeavor, a car manufacturer named after his native Detroit was a failure due to the low-quality and high-cost of its cars. The board of directors lost faith in an inventor who had spent too long trying and failing to perfect his automobile so dissolved the company after just a year and a half of trading. This didn’t stop Ford though, who went on to revolutionize car manufacturing through his development of the assembly line model of production.  As Henry Ford put it himself, “Failure is simply the opportunity to begin again, this time more intelligently.”

With over 1,900 outlets in 50 countries, The Body Shop is one of the world’s best-known cosmetics chains. Famed for its ethical stance, the brand was one of the first to completely reject animal testing and adopt a fair-trade business model. Founder Anita Roddick did however face some hardship when establishing her brand.  Banks refused to lend her money to kick-start the business, local funeral parlors objected to the name of her shop and her products were branded “cheap” for their recycled-container packaging. Even the iconic dark green color scheme of her stores was originally chosen to cover up mold on the walls of her first shop. Roddick’s unique blend of activism and entrepreneurship was surely the key to her success and it is perhaps best reflected in The Body Shop’s mission statement, “To dedicate our business to the pursuit of social and environmental change.”

According to James Dyson, failure is something to be enjoyed because, “You can never learn from success.” It is a mantra which Dyson has certainly learnt from. In 1978, frustrated with a constantly clogged vacuum cleaner, Dyson set out to solve the problem by inventing his own. Five years and 5,127 failed prototypes later he had finally succeeded in creating the world’s first bagless vacuum cleaner. The process had nearly bankrupt him and it would take three years and multiple rejections for him to reach a licensing agreement, but James Dyson refused to give up on his product. By 1995 his vacuum was the best-selling in Britain and this success in his home country opened the door to license the product in other European countries. Today, the Dyson vacuum cleaner is sold in over 65 countries worldwide and the Dyson product range has expanded to include hair dryers, hand dryers and fans, all incorporating Dyson’s groundbreaking cyclonic technology.

One of America’s best-known media personalities, Oprah Winfrey’s career is multi-faceted. TV show host, philanthropist, actress and producer, her talents know no bounds. Yet Winfrey’s success was anything but handed to her on a plate. Born into an impoverished Mississippi family she suffered sexual abuse at the hands of male relatives and became pregnant at 14, although she lost the baby. At rock-bottom, Oprah moved to Nashville to live with her father, where she began to take on jobs in radio and television broadcasting. Winfrey was even fired from one of her first jobs at a Baltimore news station for becoming too emotionally invested in her stories, the very quality which would later make her a smash-hit with the public. Winfrey has campaigned tirelessly for children’s and women’s rights and has played a pivotal role in the #MeToo movement.

Dr. Seuss, the man behind iconic children’s books such as The Cat in the Hat and The Grinch started out as a full-time cartoonist, turning his hand to liberal-oriented political cartoons during the Second World War. His first dabble in literature saw him illustrating a book which sold poorly but gave him a taste for writing children’s novels. However, Seuss’s first book, And to Think That I Saw it on Mulberry Street was rejected by a staggering 27 publishers before eventually being taken on by Vanguard Press in 1937. Seuss took to writing full-time, despite a brief career change during the war, but had little actual success until 20 years after the publication of his first book. In 1957 he wrote and published The Cat in The Hat, probably his best-known work, described by a critic at the time as a “tour de force,” this book cemented the quirky style of narrative for which he is so loved. Dr. Seuss’s books remain a staple of children’s literature over 50 years after their initial publication.

Joanne Rowling’s Harry Potter is one of the most popular book and film franchises in history.  Her books have sold 450 million copies to date and the movie franchise has grossed $7.7 billion. Today her net worth of $850 million makes her richer than Queen Elizabeth, but Rowling’s early adulthood was far from glamorous. At the time of writing the first Harry Potter, Rowling was a single mother surviving on state benefits and suffering from depression following the death of her mother. The idea had come to her whilst travelling on a train from Manchester to London. Once written, her book Harry Potter and the Philosopher’s Stone, was rejected by 12 major publishing houses before finally being picked up by Bloomsbury, who told her nonetheless to find a job because there was no money to be made in children’s books. Twenty-one years, 26 books and 13 films later, Rowling has used her wealth and recognition to champion charities which seek to combat poverty and social inequality, donating over £8 million to good causes in 2017.

Steve Jobs is hardly a name which requires introduction. Co-founder and CEO of Apple Inc., his net-worth was estimated at $10.2 billion when he died of pancreatic cancer in 2011. But the road to success was not a smooth one for Jobs. In 1985 he left Apple, the company he had started, due to disagreements with new Apple CEO John Sculley, who he himself had hired. Humiliated and downcast at being ousted from his own company, this could have been the end for Steve Jobs, but his resilience led him to invest in Pixar Inc. and start a new company NeXT Inc. Despite the commercial failure of this new venture, its purchase by Apple in 1996 led Jobs back to his role as Apple CEO by 1997, on an official salary of just $1 a year. The rest is history. Today Apple products, from personal computers to the iconic iPhone, dominate the technology market and the company is a global household name.