Bär & Karrer's co-head of arbitration discusses the Swiss arbitration climate, the challenges of award enforcement, and how arbitrators’ work has been slowly but steadily changing. 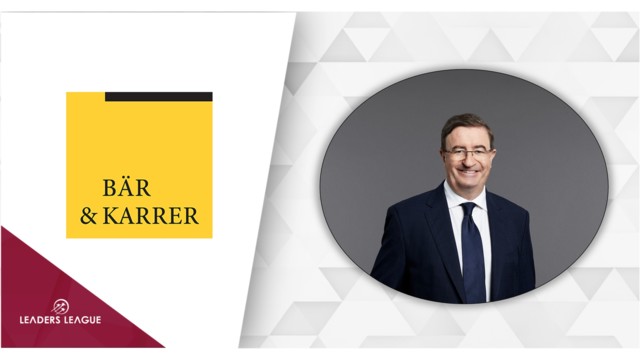 Leaders League: How has the world of arbitration reacted to COVID-19, and to what extent is the digitalization/virtualization here to stay?

Pierre-Yves Gunter: Most of our in-person hearings were either postponed or replaced by entirely virtual ones. We have had a few hybrid hearings – where three arbitrators might share a room but the counterparties, counsel and experts would be physically absent, for example.

It was more of a challenge for counsel, but it works. The only downside, in my view, is control over the witness examination. In a few cases, I got the impression that the witness was getting some assistance, from a device if not from someone in the room. If you do not have a multi-camera set up, these things can be difficult to properly secure.

There can be other drawbacks too, such as the impact of the various time zones or the poor quality of the IT connection of some participants. I recently had an arbitration where the quality of the internet connection of one of my co-arbitrators was an issue. We had to create a private WhatsApp group to ensure we could properly communicate within the tribunal.

Within my team, due to the pandemic, the challenge sometimes is to keep everyone in the team motivated. It is crucial to regularly be in contact with the team and to organize regular virtual meetings. These are tough times, especially for those, like many young associates, who live alone. It can also be difficult for team members with young children – working at home surrounded by the children is sometimes a real challenge.

Award enforcement is a strength of Bär & Karrer’s. How has the firm handled cases where defendants liable for large sums refuse to pay what they owe, or employ delaying tactics and other wiles to avoid paying?

The issue of enforcement is inevitably part of the overall strategy and protection of the client’s interests. What is the point of obtaining a favorable award if you cannot enforce it when the opposite party does not abide? Therefore, we always recommend to our clients that we anticipate together this important issue. I have a hearing in a few months for a client where the issue of enforcement is key: the opposite party does not appear to have assets abroad, and the national courts of its country of registration are known for protecting the companies or individuals of that country.

I shall mention that we of course also have experience acting on the other side too. When we anticipate that an award will not be or partially be in favor of our client, we team up with law firms in other jurisdictions. We have a case at the moment where our co-counsel in a specific country regularly checks with the local courts whether enforcement petitions have been filed, and sends us a weekly report.

From your perspective as an arbitrator, is there anything about the current culture or rules of arbitration that you would like to see changed?

This innovation was hotly debated. Some practitioners argued that in allowing it we would lose business to our foreign competitors. They also raised concerns about the quality of the appeals, since foreign practitioners are not as experienced as Swiss practitioners with the expectations of the Swiss Supreme Court. Other practitioners like me consider that this innovation makes a lot of sense: the vast majority of international arbitration proceedings are conducted in English and the arbitral awards written in English. In the past, the obligation to file the appeals in one of Switzerland’s national languages led to burdensome translations.

Regarding practical challenges from an arbitrator’s point of view, one should not underestimate the increasing inequality of arms between counsel and arbitrators. Indeed, whereas the size of an arbitral tribunal has not changed over the years (most panels being composed of three members), I witness year after year an increase of the size of counsel teams. Sometimes this is justified – in major construction cases, for instance – but not always. Globalization and law firm mergers, particularly at international level, also explain the situation: arbitration departments are under strong internal pressure to be as profitable as other departments. This being said, more lawyers usually means higher volumes of written submissions and documents.

If counsel and their clients wish arbitrators to do their work properly, this element needs to be taken into account and information must be submitted in a reasonably processable fashion. Never underestimate the task of an arbitrator. One of the cases I recently arbitrated involved a four-week hearing with 12,000 pages of submissions, witness and expert evidence to read in addition to several thousands of pages of exhibits.

This also applies to young arbitrators at the start of their career. I recently came across a situation where an associate in my team was appointed as sole arbitrator in a case with a small value in dispute. I was surprised and disappointed to see that the arbitration institution had no hesitation in fixing its administrative expenses at the same level as the arbitrator’s fees. In my view this cannot be justified and in the long run may deter talented arbitration practitioners from acting as arbitrators.

What is the current landscape like in Switzerland for third-party funders wanting to get into arbitration?

There was a time when funders would be involved mostly in investment-treaty disputes. But over the last five years, third-party funders are increasingly interested in funding commercial cases. They are regularly contacting us, knowing that we tend to act on the investors’ side more than on the side of states. It is worth noting that they also contact our clients, large international groups in particular, which in principle would have no difficulty financing their arbitration; funders attempt to convince them that from a cashflow point of view, their CFO might find it interesting to resort to funders, cashflow having become particularly important during this unfortunate pandemic.

In Geneva, where numerous large and well-known trading and shipping companies are located, some of our clients have expressed a particular interest in securing the assistance of funders with respect to the enforcement of arbitral awards.

We also see innovative approaches where large international firms are teaming up with funders to offer a global package to those large groups. My impression is that the offer of funding is stronger for arbitration than for litigation. There is growing competition among funders to fund cases; no doubt they will have a great future even if competition, as with competition between law firms, is fierce.