Oscar Simões: 'Piracy is the biggest threat to the pay-TV sector'

The Executive President of the Brazilian Pay-TV Association (ABTA) talks about the fight against piracy in the context of technological advances and the challenges of fighting the illegal practice. 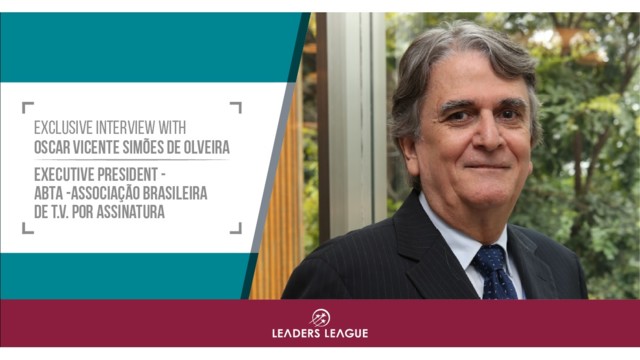 Leaders League: Brazil is the fifth largest consumer of pirated content in the world, with 4.5 billion illegal streams and downloads.  What is the industry doing to address this issue?

Oscar Simões: Piracy is currently the biggest threat to the pay-TV industry in Brazil. It surpasses the economic crisis and competition fromstreaming platforms, which are not subject to the same regulatory requirements or tax burden.

According to a survey comissioned by ABTA last year, 33 million Brazilians, or 27.2% of internet users over the age of 16, watchpay-TV illegally for free.

But the fight against piracy goes hand-in-hand with the action taken against the criminals running it. In recent years, with the support of state agents, we have substantially increased the number of pirated equipment seized and websites with ads for illegal services taken down.

Appealing to the public not to accessing paid content via illicit means is also part of the fight against piracy. Throughout 2021 and in the first months of 2022, ABTA broadcast a comprehensive advertising campaign on the main pay and free-to-air TV channels, fearuring children pointing out the contradiction of adults teaching them right from wrong while at the same time pirating content.

Another significant aspect was that Anatel (National Telecommunications Agency) carried out technical studies which proved the existence of malware in Brazil’s best-selling chipped TV box. Consequently, the agency was able to warn the population about this threat they posed to the security of users and the country itself. This initiative was a significant milestone in the fight against piracy and deserves recognition from society and the audiovisual industry.

What are the main obstaclesto fighting piracy in Brazil?

One of the biggest challenges in fighting piracy is that technological transformation is outpacing the legal framework governing digital crimes. We still lack understanding of the severe impact caused by these new criminal organizations operating in the virtual environment. We understand that our current challenge is to provide regulators with the legal means to quickly counteract piracy of audiovisual content on the internet.

The law offices assisting clients in anti-piracy matters conduct their investigations in partnership with the public authorities. How can these law offices contribute to repressing this activity?

There are four ABTA pillars supporting the task-force in its fight against piracy: technical, institutional, judicial and communication measures. This group comprises a vast team of lawyers from pay-TV operators and programmers assisted by specialit law firms. And the results have been significant.

ABTA signed a Cooperation Agreement with the São Paulo Public Prosecutor's Office in 2021 to introduce measures designed to curb internet piracy. It includes the possibility of judicial proceedings to obtain injunctions to block illegal streaming sites.

Additionally, the São Paulo Public Prosecutor's Office notified 42 advertisers offering products to pirate pay-TV on a large internet marketplace. Following the sending of the first letter, 35 of them removed their merchandise from the marketplace. And the platform excluded the remaining users for continuing to offer illegal TV Boxes.

According to Anatel data available on ABTA's website, the number of pay-TV subscribers has beendeclining steadily since 2017. What are the reasons for this?

The leading cause of the drop in subscribers is the economic crisis. After the so-called "lost decade," where Brazil's GDP had an accumulated growth of only 2.7% between 2011 and 2020, we faced two years of the pandemic, with annual inflation and unemployment above two digits, eroding consumer spending power.

Furthermore, there are two additional threats previously mentioned: piracy and competition from streaming platforms, which are not subject to the same regulatory requirements and tax burden -  things which increase costs for pay-TV operators.

What can we expect from ABTA in the next twelve months?

In 2022, ABTA will continue to play its role as a champion of the pay-TV sector in Brazil and focus mainly on simplifying regulations, fighting piracy and boosting the value of pay-TV content in Brazil.

Furthermore, due to the technological transformation that’s been impacting the audiovisual industry in recent years, one of ABTA's proposals for 2022 is to discuss its new strategic positioning considering the latest configurations of the pay-TV sector, which now operates on multiple platforms.