At a time when multilateral negotiations are increasingly giving way to bilateral and regional approaches, the European Union and Mercosur made history by signing a bi-regional association agreement, which encompasses not only trade and access to consumer markets, but also political and cooperation matters. After 20 years of negotiations, the deal defies a rising tide of international protectionism and has great potential to positively impact both regions in many ways, whilst also bringing new challenges. 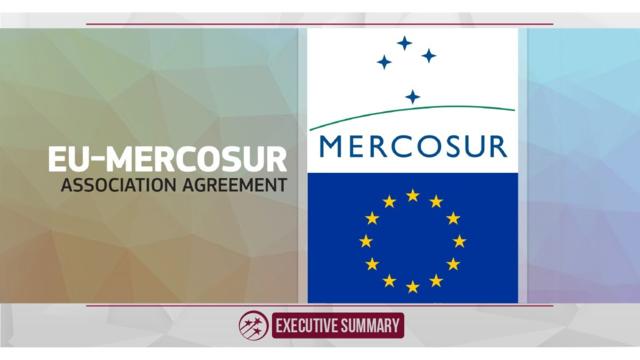 Before signing the agreement on June 28th, the European Union (EU), composed of 28 member countries, already had an inter-regional framework cooperation agreement with Mercosur as well as bilateral framework cooperation agreements with its four founding members: Argentina, Brazil, Paraguay and Uruguay. However, not only does the new arrangement make the EU the first major partner to strike a trade pact with Mercosur, it also aims to expand trade and cooperation between both regions by addressing specific issues such as tariffs, technical barriers, sanitary and phytosanitary measures, as well as sustainable development.

Among other key provisions, the treaty eliminates high customs duties in sectors of the economy such as machinery, chemicals and pharmaceuticals, which enjoy a particularly large volume of trade, as well as in sectors in which trade has been timid due to prohibitive tariffs, such as the textile industry. The agreement also settled a previously thorny issue during the two decade-long negotiation: agriculture. In 2018, the EU’s exports to Mercosur totaled €45 billion, including machinery (28.6%) as well as chemicals and pharmaceutical products (23.6%), whilst Mercosur’s exports to the EU summed €42.6 billion, with a focus on raw agricultural products.

As agribusiness should become more competitive once the trade deal comes into force, the EU, which has been historically protective of this market, successfully pushed for the inclusion of environmental preservation guarantees, such as the enforcement of the Paris Agreement, in the final text. The accord will thus contain a sustainable development chapter covering issues such as sustainable management, forest conservation, the rights of indigenous communities and deforestation prevention.

Once a global leader in the defense of sustainable development and environmental safeguards, under the Jair Bolsonaro administration, Brazil has approved hundreds of new pesticides, many of which are banned in Europe, and has controversially rolled back environmental regulations. These measures may potentially reverse decades of progressive policymaking, jeopardize large portions of the Amazon and, consequently, undermine the country’s agricultural leverage in European markets. More than that, with the National Institute for Space Research (INPE) reporting a 68% rise in deforestation from July 2018 to July 2019, opponents of the deal, such as European farmers and green parties, now have plenty of ammunition with which to call for the deal to be blocked. In addition, following the G7 meeting in France at the end of the summer, president Emmanuel Macron stated that, given the current policies pursued by the government in Brazil, France would not ratify the agreement.

If, on the one hand, Brazil may reap the rewards of the trade deal in the agribusiness sector if it complies with environmental rules, on the other, increased competitivity may lead to short-term domestic deindustrialization and decrease Brazilian exports of low and medium-tech goods to other Mercosur countries, though, in the long run, this tends to bring positive results. After all, opening the economy to Europe offers Brazil new avenues for development, as it has heavily relied on China, its top trade partner since 2009, and the United States, its foremost economic ally for most of the 20th century, in recent history.

According to the Brazilian ministry of economy, the trade agreement will represent earnings of $87.5 billion over the next 15 years, with inbound investments rising to $113 billion, and exports to $100 billion. Moreover, as Brazil strengthens its bid to become a member of the Organization for Economic Cooperation and Development (OECD), especially after support from the United States, the EU-Mercosur Association Agreement will be another important step towards sustained economic recovery and growth.