Leading in a crisis: Is Donald Trump reacting correctly?

Many people are saying that, at a time when the coronavirus pandemic is disrupting economies and societies across the world, strong leaders are now needed more than ever. With regard to the situation in the US, all eyes are on President Donald Trump as the American people seek guidance and reassurance at a time when the world’s largest economy tries to withstand an enormous shock. 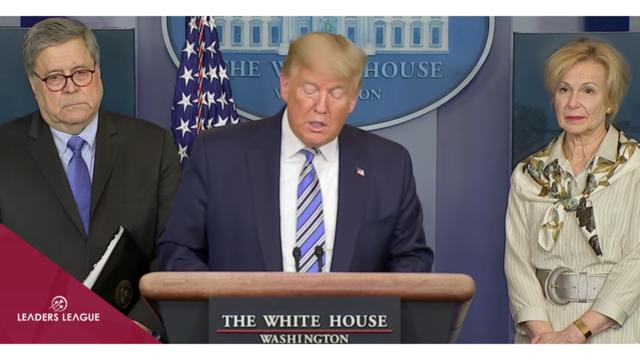 We analysed the press conference held by Trump and the White House Coronavirus Taskforce yesterday (23 March) in which he sought to update the public regarding the coronavirus outbreak. Trump received severe criticism for his performance in some quarters, with some analysts accusing him of dangerously downplaying the threat posed by the virus.

What is Trump’s real priority?

Trump began by seeking to reassure the American people that the US would successfully navigate the crisis. In recent weeks he had been lampooned for not reassuring the people enough and not taking sufficient responsibility for the massive challenge the country now faces. “I want Americans to know that we will get through this challenge, the hardship will end, it will end soon, normal life will return and our economy will rebound very, very strongly, but right now in the midst of this great national trial, Americans must remain united in purpose and focused on victory,” he said. However, it should be noted that, even at this point he also included a reference to the economy rebounding, which will do nothing to silence critics who say that his real priority is business rather than saving people’s lives.

Trump has rightly received heavy criticism for referring to COVID-19 as the “Chinese virus”. There is considerable concern about increased instances of xenophobia among the US public, many of whom are already frightened about the threat posed by the virus. In yesterday’s press conference, Trump spent some time attempting to repair some of the damage he has caused.  “It’s very important that we totally protect our Asian-American community in the United States and all around the world,” he said. “They’re amazing people and the spreading of the virus is not their fault in any way, shape or form. They’re working closely with us to get rid of it. We will prevail together.” Sceptics swould argue that he didn’t refer to the Chinese as “amazing people”, but instead referred to the “Asian-American community”, which suggests he may be reserving the right to use the term “Chinese virus” again in future.

It seems clear that business is Trump’s priority. He concluded his opening remarks by saying: “Together, we will care for our fellow citizens and we will win this war, and we’ll win it much sooner than people think and we’ll be back in business as a country pretty soon.” Note the use of the word “citizens”, which could be argued is a very detached way of referring to what are, after all, people. It suggests that Trump does perhaps lack the common touch. During the conference, it was not until the microphone was handed over to Deborah Birx, the physician who is coordinating the response for the White House Coronavirus Task Force, that we got the sense that the concerns of the average person were being addressed in more colloquial terms that would strike a chord with everyone. She said: “In the mortality data that has been provided to us there has been no child under 15 that has succumbed to the virus in Europe. There was the one 14-year-old in China, so we still see that there is less severity in children, and so that should be reassuring to the moms and dads out there.”

Trump’s presidency has been marked by a hostility towards outsiders, whether they are Mexicans, the Chinese or Europeans (when Trump banned travel to the US from Europe, he initially, bizarrely, excluded the UK and Ireland from the ban). In contrast, during yesterday’s conference, Birx quickly adopts a diplomatic stance and seeks to build bridges with counterparts in Europe. She said: “I want to really thank all the Ministers of Health around the world who have been sending us their data despite the fight that they’re in themselves, particularly our European colleagues. They continue to send us primarily their mortality data, which is really very critical.”

It was later in the press conference that Trump caused the most controversy when he began comparing the threat of the coronavirus to the danger of car accidents. He said: “And again, I say, we have a very active flu season, more active than most. It’s looking like it’s heading to 50,000 or more deaths, deaths not cases. 50,000 deaths, that’s a lot. And you look at automobile accidents, which are far greater than any numbers we’re talking about. That doesn’t mean we’re going to tell everybody no more driving of cars. We have to do things to get our country open.” This response provoked an angry response. Philip Bump, a correspondent at the Washington Post, wrote: “We can dispatch with the comparison to car crashes quickly. The problem with the coronavirus isn’t that we have 530 deaths now, it’s that the virus is on a trajectory that will lead to far more deaths down the road. If the number of car crashes was doubling every four days and if 1 percent of them resulted in a fatality, it’s safe to assume that the government would shut down roads until it could figure out how to slow the death toll.”

Trump goes on to suggest that the economic damage caused to the US by an extended lockdown could cause more deaths than the coronavirus itself. “We’re going to win the battle, but you have tremendous responsibility,” he said. “We have jobs. We have people get tremendous anxiety and depression and you have suicides over things like this. When you have terrible economies, you have death probably, and I mean definitely would be in far greater numbers than the numbers that we’re talking about with regard to the virus.” This is debatable, and even Trump's use of the word 'probably' is an acknowledgement of this. The economic impact of a lockdown would depend on the length of the lockdown and there is no detail regarding this point. At times of crisis, leaders have an obligation to reassure people, while being honest, and at this point, this comment definitely falls into the scaremongering category.

But even in these times of global crisis, with an anxious populace seeking strong leadership, the fragility of Trump’s ego remains apparent. At one point, around halfway through the press conference, Trump turned to Birx and asked whether the social distancing being practiced by the journalists at the conference will become the norm in the future. However, the enquiry is wrapped in self-pity. “I have a question for you,” Trump says to Birx. “We have a lot of very angry media all around this room and they want one of these seats, but because of social distancing, we are keeping them empty and they are keeping them empty. Will there ever be a time when all of those really angry, angry people who don’t like me much to start off with, but now they really don’t like me, will there ever be a time when these seats are full, like full to the brim like it used to be where people are almost sitting on each other’s lap?” Perhaps ominously, Birx replies: “I don’t know.”

While Trump initially used the press conference to give the American people reassurance that the country would successfully navigate the coronavirus crisis – and he did attempt to repair some of the damage caused by his “Chinese virus” remarks – he still came across as a leader more concerned about companies’ profits than people’s lives. Some of his remarks also betrayed a lack of empathy. Time will tell if performances such as this will damage Trump’s prospects in any future presidential election campaign.