Laure de Carayon: “Chinese customers are modernizing but not westernizing” 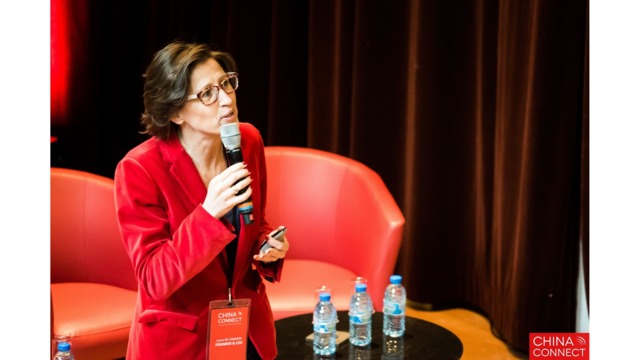 Intrigued by China’s rapid innovation rhythm and unique digital development path, Laure de Carayon, a marketing and communication expert by profession, launched the China Connect Forum in Paris in 2011, in order to present the ancient empire’s digital and consumer trends to the Western world. The 8th edition, gathering over 600 business executives and other high-level participants, will be held in Paris on March 7th and 8th.

Leaders League. China Connect held its first Shanghai edition last year. Why did you choose to go to China?

Laure de Carayon. To get even closer to the Chinese business community, who I see regularly when I travel over there, to strengthen our community of pure-players and to understand them better, and to help promote everything about Western brands that is relevant to a Chinese audience, like social media, e-commerce and data.

Also because I was convinced that there was an opportunity to give Chinese players access to Western players – those Europeans and Americans already working over there in digital, marketing and brands.

We target a different audience from that of our Paris event. Our Shanghai event gives local and regional teams, from Singapore or Hong Kong say, the chance to come together and network with players from other regions of Asia and the West. It’s all about strengthening relationships.

There are many similar conferences out there, but ours is the only one really bridging Europe and China on the subject of digital marketing and innovation. We want China Connect to be the destination of choice for the Chinese and European marketing and tech communities.

What is your expectation for future editions in China?

Always introducing the best of digital China to the rest of the world. Whether it’s in Paris or Shanghai, we invite high-level executives such as managing directors and CEOs to participate. I’ll give you a concrete example: Joshua Xiang, general manager of Suning Research, was a speaker last year in Shanghai and met another speaker, the CEO from an emerging Chinese tech company EMOTIBOT, during the event. They went on to announce a deal together at the recent CES in Las Vegas. Isn’t it exciting that the Chinese companies were able to discover new business partners at an event organized by a Western team in China?

The theme of the 2018 Paris event is “China, The New World’s Inspiration.” Could you explain to us the choice?

With Chinese companies having more ambition of developing their models in other countries with similar consumer profiles, market size and speed of development, things are happening at a massive scale and a really fast pace. Executives in big companies in the West are now looking at China, and more generally Asia Pacific, as more than a source of inspiration but as a region that is going to dictate the future in Europe and the United States.

There has been a shift. When it comes to e-commerce, mobile payment, electric cars and technology as a whole, inspiration is now coming from China. That is why we set up for the first time in this year’s event three discussion panels focused on influencer marketing, e-commerce and AI, to encourage the exchange and dialogue between players from China and the West.

“There has been a shift. When it comes to e-commerce, mobile payment, autonomous cars and technology as a whole, inspiration is now coming from China.”

What are the main topics of this year’s event?

Social media networks, e-commerce, content platforms and data remain the pillars of the event. These days social data and digital are the business drivers of all commerce ranging from high-end luxury brands to mass consumption companies like food and beverages. All brands, whatever their size is, are looking for solutions to connect with the Chinese customers.

It’s been said that China’s digital market is isolated from the rest of the world and a byproduct of this is that Chinese companies cannot easily succeed outside their home market. Do you agree?

No. Let me give you just two examples: a company like Musical.ly, which we invited to China Connect Shanghai, successfully developed abroad initially; now they are launching in China with Bytedance who bought them last fall. Meitu has also a strong user base abroad. Huawei is another example of success.

It is natural that Chinese companies haven’t yet gained as much success overseas as in China, because they face various hurdles such as entry barriers or cultural difference, and local players and tools already exist. Many Chinese homegrown successes are only now at the beginning of their international expansion plans, and the world needs to get to know them more. Give them time and we’ll see.

What advice would you give to Western companies seeking to succeed in the Chinese market?

Thesedays Chinese consumers have more purchasing power, they are more sophisticated and knowledgeable, are keen on experiencing novelty and want to express their unique characters and individuality, so brands have to target them with niche products and innovations, but moreover, with the right messages.

One thing to keep in mind is that Chinese customers are modernizing but not westernizing. Marketing products and services which appeal to that mindset is a challenge.

For example Starbucks in China is not the Starbucks you have in the US or in Europe. Transferring the basic concept, offer and brand image – quick breakfast and lunch, takeaway coffee etc. – is good but not enough, and it’s about localizing the offer and providing an experience that you cannot find in the US coffee shops. This is also the case, say, for Decathlon or IKEA.

Consider something seemingly universal like travelling. The priorities for Chinese tourists and the way they travel are not the same as Western tourists. Habits and expectations keep changing and companies need to be aware of that.

What do you consider as hot sectors to follow up this year?

The connection between online and offline is not something new but has been making headlines: key players like JD and Alibaba are making acquisitions of traditional retailers, and planning to digitize these traditional points of sale by introducing cashier-less stores. In the US, Amazon Go have opened their stores and in China there is a plan to open more than 2,000 such outlets. There is a lot of buzz around this and for good reasons because it’s becoming a reality, but the question will be how fast people will embrace this experience. Some recent studies show that people are not that keen on embracing the opportunity. It’s not easy to convert people to new technologies, and even in China getting people to change their habits takes time.

Influencer marketing is taking scale too, with social networks, short videos and live stream being part of it.

And innovation in VR/AR and AI technology is arriving on the market fast. We are at the beginning of the age of conversational commerce, with the examples like Tmall Genie or DingDong (Joint Venture between JD.com and IFlytek), where people don’t need to use their computers or phones to make purchases. This is going to be a major trend.