A year ago many viewed her as the ideal candidate to defeat Donald Trump. As Joe Biden’s running mate, she might just have made the difference to his tilt for the presidency. 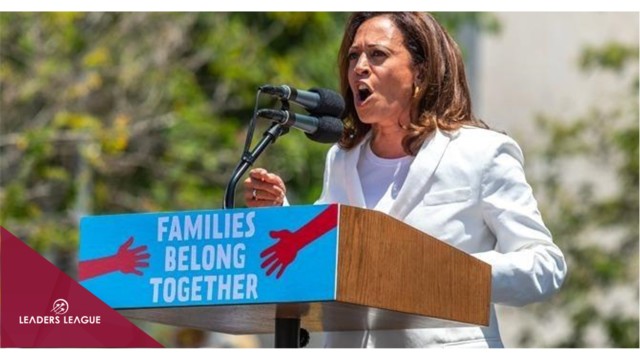 Mixed-race, female and the child of immigrants. A couple of presidential elections ago, these facts would have been enough to ensure Kamala Harris was a non-starter. In 2020 it made her the ideal candidate for Joe Biden to add to the Democratic party ticket.

And no sooner had she got the VP nomination than Donald Trump went on the offensive, referring to her as a ‘nasty’ women and suggesting that Joe Biden was merely a Trojan Horse, whose function was to carry the senator from California into the Oval Office, where she would take over as president ‘after three weeks’.

Alarmist? Sure, but not without a hint of truth, since Joe Biden, who turns 78 later this month, has what some have dubbed a fragile state of health, and Harris is first in line to step in should he become incapacitated during the next four years of a potential presidency.

President-in-waiting?
While some on the conservative side of the aisle take exception to Harris, many in the political establishment view her not only as the ideal candidate to be vice president, but as an eventual leader of the country, since she represents the face of the new America, more open and inclusive. A thoroughly modern figure with broad appeal, Harris has proved sufficiently charismatic to win over a large section of voters and sufficiently battle-hardened to go toe to toe with Trump – able to give as good as she gets when it comes to the sort of verbal jousting he relishes.

"A pure product of the meritocratic system with the added bonus of incarnating diversity, when it comes to the American Dream, Harris ticks all the boxes"

The Oakland native came onto the national scene with the Democratic party still smarting from Hillary Clinton’s loss in 2016. The child of a Jamaican professor of economics father and an Indian cancer specialist mother, she has achieved much in her life to date, graduating from prestigious schools such as the University of California Hastings College of Law and Howard University, spending eight years as district attorney for San Francisco before becoming Attorney General of the State of California in 2010. In 2016, she became only the second black woman in history to be elected the senate.

She would appear to be a pure product of the meritocratic system with the added bonus of incarnating diversity. When it comes to the American Dream, Harris ticks all the boxes. Throw in her magnetic personality and iron will and it’s not hard to see why 20,000 showed up to watch her announce her candidacy and how she could receive over a million and a half dollars in donations in the space of 24 hours.

Fearless
Political scientist and America-watcher Nicole Bacheran is not surprised. “She’s beautiful, charismatic and experienced, and what’s more, she’s not afraid to mix it.” Neither is she lacking in know-how. Whether it’s on social media, where she has made combativeness her trademark, or during her public speaking engagements, where the word fearless is ever present, the 56-year-old has a knack for getting people to sit up and take notice. Her democratic presidential nomination campaign video began with the words “I was born in Oakland,” advertising her street cred. Oakland, that downtrodden city across the bay from affluent San Francisco, synonymous with the civil rights movement, the birthplace of the Black Panthers and a hotbed of racial activism. What better way to burnish her tough-girl credentials?

“The fact that she grew up in Oakland gives her a certain, almost badass, stature,” which in the current intentionally brutal and immoderate political climate would appear to be a competitive advantage. She has successfully framed her combative style as part of her proud family heritage declaring, “My parents played an active part in the civil rights movement and all throughout my life they taught me it was my responsibility to fight for what’s right. That is what I am doing.”

Ideal foil for Biden
Combative, competent, a veritable authority figure (the fact that she was a DA for seven years gives her strong law and order bonafides) she was not afraid to verbally duke it out with Joe Biden during debates ahead of the Democratic party nomination, accusing him of having, in the past, worked with senators who favored racial segregation.

However, after receiving only 3% of voting intentions, Harris would be forced to withdraw from the party nomination race at the end of 2019. She subsequently endorsed the senator from Delaware. In true Democrat ‘team of rivals’ style, Biden made Harris his running mate, instead of picking a lower-profile politician.

Relatively young in political terms, Harris seems ideally placed to respond to the challenges facing the country in the next decade. “She is,” adds Bacheran “a politician for her time.”