The young New Zealand prime minister has taken the international political and media stages by storm, thanks to an approach to leadership based on homespun charm and authenticity. 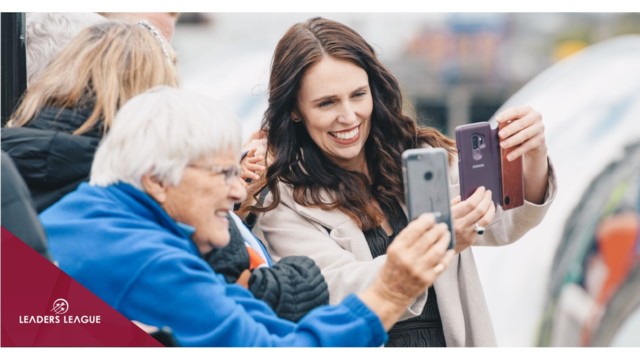 Through the surefooted steps she has made in office, the 39-year-old has acquired a high level of legitimacy, which she has used as a platform to take daring political decisions. Famous for becoming prime minister at just 37, and subsequently for taking her three-month-old baby to the United Nation’s general assembly in New York, respect for Jacinda Ardern reached new heights in the aftermath of the Christchurch attack in March 2019, thanks to her firm yet compassionate response to the massacre.

In response to the mass shooting, which left 51 dead, she launched a buyback program for semi-automatic weapons, and less than one month after the attack, the New Zealand parliament passed a law banning most semiautomatic weapons and assault rifles, as well as parts that convert guns into semiautomatic guns, and higher capacity magazines. Her leadership has impressed many in the global political community, not least those in the United States calling for stricter gun laws there. “America Deserves a Leaders as Good as Jacinda Ardern” exclaimed an editorial in the New York Times in March 2019.

The video quickly went viral: Jacinda Ardern in the middle of an interview on New Zealand TV as a 5.6 magnitude earthquake struck, keeping calm and carrying on. The episode illustrated her ability to remain composed and concentrate on the task at hand in the most trying of conditions.
When the first cases of Covid 19 were discovered in New Zealand in March, the head of state stressed the importance of “striking hard and striking fast”. On March 14th, while her country had recorded only six cases of the virus, Ardern announced that all foreigners arriving in the country would be subject to a 14-day quarantine. Before the month was out Arden had taken the decision to shut the border. This measure, coupled with a seven-week lockdown and an extensive testing program, saw the country snuff out the threat of the virus. To date only 22 Covid deaths have been registered in the country of 4.8 million inhabitants.

Beyond this effective management of the pandemic, her clear and transparent communication has also impressed. A communications graduate, Ardern committed herself to giving daily press conferences at the outset the crisis, during which her natural demeanor and pedagogic tone served to reassure the nation. She also took part in Q&A sessions on Facebook Live and in doing so earned the trust and admiration of the younger generation. The result? 92% of all New Zealanders are satisfied with the government’s handling of the pandemic – an approval rating likely to turn even the most well-adjusted world leader green with envy.

"When the first cases of Covid 19 were discovered in New Zealand in March, the head of state stressed the importance of 'striking hard and striking fast'"

Going against the grain

The 40th prime minister of New Zealand (who turned 40 on July 26th) has everyone dancing to her tune, to the point where the press speak of “Jacindamania”, and her popularity with the electorate has allowed her to take decisions a premier with less of a mandate might shy away from. On April 15th, in solidarity with workers effected by the economic fallout of the coronavirus, she announced that all government ministers, herself included, would immediately be taking a six-month 20% pay-cut. “We acknowledge new Zealanders who are reliant on wage subsidies, taking pay cuts and losing their jobs as a result of the Covid 19 global pandemic. While it in itself won’t shift the governments overall fiscal position, it’s about leadership.”

One month later, as many countries contemplated increasing the number of hours in the working week as a way to jumpstart the post-lockdown economic recovery, Ardern went the opposite route, coming out in favor of the creation of new public holidays and a four-day working week. To her mind, these steps would at once improve quality of life for millions of her compatriots and help stimulate the tourism sector by giving people more time off to take breaks and explore their homeland. Not for the first time, Ardern has allowed Kiwi’s to dare believe in a better New Zealand.

The Most Powerful Woman In The World: How Jacinda Arden Exemplifies Progressive Leadership (Skyhorse) will be released on September 15th