The two behemoth banks have elevated four senior executives – two of them women – that now have a shot at the top spot. 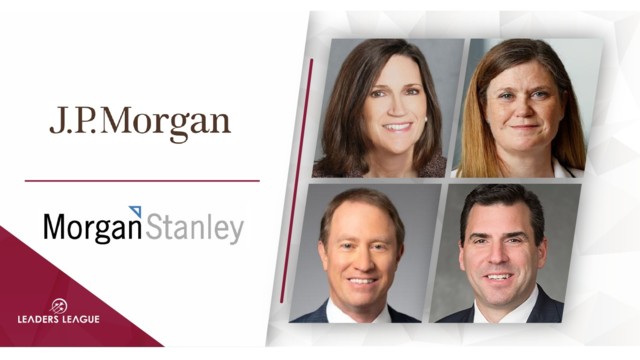 In the last three days, two of America’s biggest banks – J.P. Morgan and Morgan Stanley – have announced some head-turning promotions.

J.P. Morgan, which has been led by the charismatic Jamie Dimon for over 15 years, announced the elevation of 51-year-olds Marianne Lake and Jennifer Piepszak, who had spent only two years in their previous roles. Both women will now be leading the bank’s consumer and community banking operations, which account for almost 40% of the bank’s profit.

Lake, a Brit who served as the bank’s chief financial officer (CFO) until 2019, has spent the last two years as the CEO of the bank’s consumer lending business. Having previously managed over $2.5 trillion of the bank’s assets, and having had a leading role in implementing a platform that oversees the bank’s regulatory capital, she has been touted for years as a potential successor to Dimon, one of the most famous names in banking.

Meanwhile, Piepszak, who succeeded Lake as CFO in 2019, has played an important part in bolstering the bank’s card services business, and is also in the running for pole position when Dimon eventually retires. (We have no current indication of when this will be: he’s spent years suggesting he’ll retire “in five years”.)

If either Lane or Piepszak end up taking the top spot, they still won’t be the first woman to run a Wall Street bank: Jane Fraser was appointed CEO of Citigroup in March.

Saperstein joined from Merrill Lynch 15 years ago as chief operating officer of national sales, and became head of US wealth management at the bank in 2009. His appointment as co-president is indicative of Morgan Stanley’s increasing reliance on wealth management as a line of profit. Though this is an increasing hallmark of all the major US banks, it is especially pronounced at Morgan Stanley, at which wealth and investment management accounted for 51% of the firm’s profit in 2019, up from 26% at the start of the decade.

Saperstein’s fellow co-president Ted Pick, head of institutional securities at Morgan Stanley, is also in the running for top spot (currently occupied by James Gorman). Having moved into sales and trading from equity capital markets, Pick is credited with Morgan Stanley growing its fixed income trading revenue by 44% in the first quarter of 2021.

It’s unclear which of the two will take over from Gorman. But it’s difficult not to notice that the two current frontrunners are men – while at J.P. Morgan, women are in the ascendant.