An interview with Sylvia Coutinho, CEO of UBS Group Brazil and Head of Wealth Management for Latin America. In 2013, she became the first-ever female president of an international bank in Brazil. 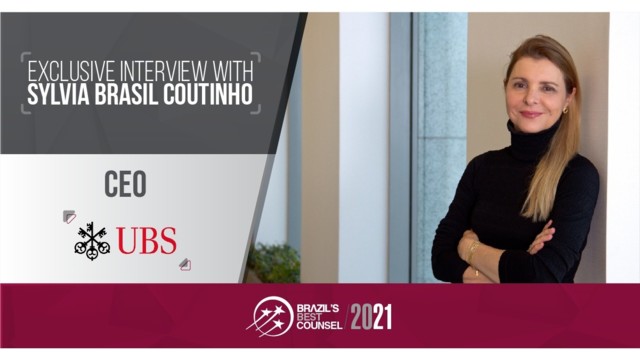 You have been CEO of UBS Bank in Brazil since 2013. What key changes have taken place in the Brazilian financial market in this time?

From 2003 to 2013, Brazil underwent a process of credit-deepening in which the ratio of credit to GDP more than doubled, reaching just under 60%. Starting in 2014, this process was reversed, partially due to the recession. When the economy began to recover in 2016, lending activities accelerated once again. The long monetary easing cycle, that has taken the Selic policy interest rate of the Central Bank of Brazil from over 14% to 2%, is leading to the re-birth of Brazil's capital markets, with new products and investment platforms being created, as investors look for alternatives to traditional fixed-income investments. Brazil has seen a tsunami of domestic funds migrating to riskier assets and record participation by individual investors in the stock market, which has contributed to a quick recovery despite an outflow of international investors from emerging markets. Another factor has been the rise of the fintech sector, stimulated by the Central Bank as it looks to increase competition in the sector by fast-tracking the implementation of open banking and Pix, Brazil’s new instant payment scheme.

What is the current perspective for the development of green finance in Brazil? How can the country unlock its potential and become a more sustainable economy?

Brazil has the most valuable environmental assets in the world, combined with the most competitive agribusiness sector, which grew mainly due to technology, research and productivity, and is now quite focused on low carbon agriculture. However, Brazil also has significant gaps in its infrastructure and so has an opportunity to implement a broad spectrum of green-type projects, ranging from rail to urban infrastructure, in order to reduce its carbon footprint. Given Brazil's size and market potential, there is no doubting its potential to become a global leader in green finance. The minister for infrastructure and the minister for agriculture have already put in place ambitious green-bond programs issued to support new investment and take advantage of the increased appetite for ESG-type investments both locally and internationally.

Looking specifically at the Brazilian agribusiness sector, which is of significant importance to global food security, production can be significantly increased without any deforestation, just by continuing to invest in technology, intensifying productivity and leveraging degraded pastures for agriculture. It has become clear to the Brazilian private sector that without a “green seal”, organizations will not be able to enhance their competitive advantage. The Brazilian private sector must no longer have a “one or the other” mindset, but rather a “one and the other”: high productivity with sustainability.

Has 2020 been a key year in the development of an ESG (environment, social and governance) agenda in Brazil? If so, why?

The Covid-19 related crisis has led to calls for a sustainable recovery, a Green New Deal. This is unprecedented. While previous economic recoveries have typically treated sustainability as a less urgent concern, 2020 marks a turning point. Moreover, health and social considerations have been brought to the forefront, illustrated by the sharp increase in the issuance of social bonds globally, a rise of over 300% year-on-year. Moreover, concerns over natural catastrophes, such as wildfires, have increased the market’s awareness of ESG. 2020 also saw the formal definition of green investment taxonomy, which provided comfort to corporate issuers and investors on the definition and tracking of green assets. With this momentum, the debate around ESG has moved from a seemingly distant long-term risk to an urgent consideration regarding short-term financial returns. For the first time, traditional asset managers in Brazil have incorporated ESG considerations into their analysis and now routinely communicate their ESG strategies to investors.

What is UBS Group’s forecast for the performance of the Brazilian economy over the next 12 months? What key trends can we expect to materialize?

We expect a gradual recovery in light of the strong level of support given by monetary and fiscal policy. For this year, we expect Brazil’s GDP to contract by 4,5%, but for growth to bounce back to 3% in 2021. Besides the inherent risks involved in the evolution of the pandemic, we also see the balance between the continuity of fiscal support in the near term versus the need for long-term sustainability as the greatest risk to our outlook. Ideally, Brazil should maintain strong fiscal support for the economy, while approving fiscal reform measures to guarantee a downward spending trend in the long term.

In 2013, you became the first-ever female president of a private bank in Brazil. How far has the diversity and inclusion agenda come since then? How far does it still have to go in Brazil?

This is an agenda which is close to my heart and one that is strongly supported by UBS globally. In Brazil, our executive committee has a 50/50 ratio of men and women, a proportion unseen elsewhere in the market. This is, and continues to be, a process, and today I see most companies in Brazil highly engaged in promoting diversity. The new generation has a very different mindset, and unless companies create an environment where diversity can flourish, they will not be able to attract talent in the future. I also manage our Wealth Management branch for Latin America, and our region is quite diverse when factoring in gender and ethnicity criteria. We will continue to move forward with this agenda and ensure our management truly represents the diversity of our client base and the communities we serve.

We are also seeking to spark the interest of young women regarding a future in the financial sector. For this purpose, we have joined forces with a select group of international banks in Brazil to guide female college students toward a potential career in financial services via a program called Dn’A Women.

Besides gender initiatives, at UBS we have also been promoting ethnic diversity. In 2015, the firm created MOSAIC, promoting a global network aimed at promoting, supporting and celebrating cultural diversity, through education, mentorship, community services and work/life balance initiatives.