João Agripino da Costa Doria Júnior is the 37th and current Governor of the State of São Paulo and previously served as the 52nd Mayor of São Paulo city. He is the founder of LIDE – Entrepreneurial Leaders Group, an organization with over 1600 national and international affiliated companies, which together represent over 52% of Brazil’s privately-held GDP. In this exclusive interview, Governor Doria discusses job creation, privatizations and how the Brazilian economy can flourish once again. 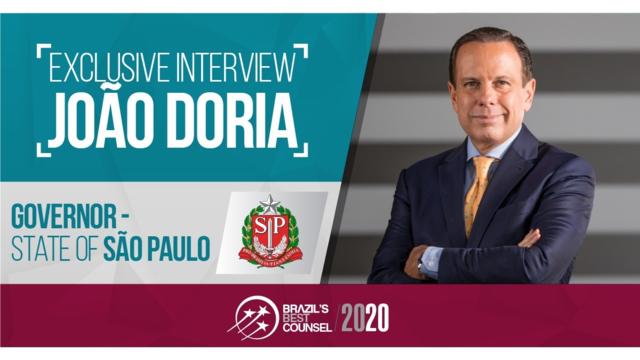 João Doria is the 37th and current Governor of the State of São Paulo.

Leaders League. Which key measures have been implemented by your administration to stimulate economic growth in the State of São Paulo?

João Doria. Creating jobs and income is a priority for our administration. Employment is the best kind of social program as it ensures economic autonomy, social prosperity and independence from clientelism. The role of public power is to create favorable conditions in which small, medium and large entrepreneurs may invest and keep the economic wheel turning.

In six months of government, we have eliminated the ICMS (state tax on the movement of goods and services) on packaged greeneries, vegetables and fruits, reduced tax on aviation fuel via the ‘São Paulo pra Todos’ program and offered lower ICMS tax rates to vehicle manufacturers which adhered to the IncentivAuto program. Moreover, we have also created 11 business development hubs with benefits ranging from simplifying tax and regulatory regimes to customizing technical courses.

By supporting industry, agribusiness and tourism, we have managed to create more jobs. Of the almost 314,000 formal employment positions created in the whole country between January and April, the state of São Paulo was responsible for about 40% of the total.

Which measures has the Government of São Paulo launched to attract new investors to the state?

Every measure proposed by our administration since taking office, in January, seeks both the maintenance of already existing jobs as well as attracting new investments. A good example is the IncentivAuto program which offers ICMS discounts of up to 25% to vehicle manufacturers presenting investment plans involving over R$1 billion and which create at least 400 new jobs. The program applies both to new factories and production centers as well as to industrial expansion plans. The faster a company implements its agreed investment, the faster it will have access to the program’s benefits. IncentivAuto, for example, was a decisive factor in Scania’s decision to announce R$1.4 billion in investments by 2024, creating 400 jobs.

On another front, our administration is also working on a major debureaucratization and destatizationprogram which should include over 200 projects by late 2022. Our objective is to attract Brazilian and international investors to invest in major infrastructure and transport projects in São Paulo thus creating thousands of jobs already from the very initial phases of implementation. This is how, for example, we plan on granting 1,200 kilometers of highway to the private sector by the beginning of 2020, as well as starting major projects such as the Intercities Train network and the privatization of regional airports.

How is your administration improving conditions for companies already established within the state?

In December, before taking office, I was informed by General Motors management that two factories would be closed in São Paulo state. This potentially meant 65,000 would be unemployed. I could not simply receive this news, lament and do nothing. It was from this starting point that, months later, our team launched IncentivAuto. In the end, not only did GM keep all of its jobs in São Paulo, but it also announced R$10 billion in new investments up to 2024, creating 1,200 new roles. It was an innovative and efficient solution – which is how we plan on functioning until the end of our administration. Additionally, we are increasing our capacity to educate specialized workforce through the Novotec program, which offers technical education vacancies to secondary students, and through the online platform, Meu Emprego, which offers 130,000 free training courses.

In March, Honda opened a R$1 billion factory in Itirapina. What new projects can we expect in 2019 and beyond in the State of São Paulo?

Our administration fully supports industry modernization, the use of technology in agribusiness and the creation of new digital services. In São Paulo, we are seeing a rising number of the above.

In Louveira, in May, we had the opening of a Procter & Gamble innovation center representing an investment of R$200 million which created 150 jobs. In Jaguariúna, Qualcomm is preparing the country’s first mobile semiconductor factory which will create a thousand jobs. CSN announced, in June, an investment of R$1.5 billion in a steel rolling mill which will integrate São Paulo’s steelworks zone, creating an estimated 1,400 jobs. In the capital, we will create the International Centre of Technology and Innovation to deepen the integration between companies, universities and governments. Lastly, there is also natural gas generation project in the west of the state which should expand into other regions. São Paulo’s economic potential is gigantic and will certainly help Brazil to accelerate its return to growth.

What will be the role of privatization in the state’s economic growth and, in a broader way, for the whole country?

The priorities of our government are public security, job creation, education, healthcare and affordable housing. In other areas, the private sector can perform a more efficient role, especially in sectors such as infrastructure, energy generation and transportation of all kind. São Paulo’s state destatization program is far-ranging and foresees from the privatization of roads, ports and airports to the shared operation of prisons. Our government defends economic liberalism and we are hopeful that the examples implemented in São Paulo serve as models for all the regions of Brazil.

The financial market had great expectations for the first semester of 2019 which did not materialize. What does Brazil need to return to growth in the second semester?

I am, first and foremost, an optimist. If congress approves a far-reaching pension reform, this will indicate to both Brazilian and international investors that Brazil is getting its public accounts in order. The approval of the pension reform will open the gates to billions in investments which are currently on hold. Our fight is to keep public state and municipal servants within the reform. The pension reform changes the face of Brazil and will be approved, of this I am sure. In its wake, will come a tax reform and a new federative pact which will drive Brazil onto a virtuous and long-lasting economic cycle.