Speed of reaction: Like the vast majority of political leaders, Ursula Von der Leyen’s reaction to the coronavirus outbreak was slow. To her credit, Von der Leyen has tacitly acknowledged that Europe was slow to react. She admitted that political leaders had “underestimated” the magnitude of the coronavirus while also speaking of Europe being “blindsided” by the pandemic. In some respects, it’s a fair point – there are many accounts of medical experts struggling to get to grips with, and understand, Covid-19. The president of the European Commission cannot be blamed for not fully understanding the nature of a virus that many medical experts have been confounded by.

But Europe should not be let off the hook so easily. On February 5th this year, the World Health Organization (WHO) said $675 million was needed for a “for new coronavirus preparedness and response global plan.” Von der Leyen and the European Commission was largely silent on the matter at this point. A more concerted effort to coax Europe into proving the additional funding, or at least a proportion of it, in a more timely manner, might have meant European nations having to provide less funding later on when the pandemic was sweeping, uncontrollably, across the continent.


Despite all this, there are numerous caveats that can be applied in Von der Leyen’s defence. We must consider that the standard of coronavirus reporting differs significantly from country to country. In other words, the figures may show us which countries have the most coronavirus cases and fatalities, but it could also show us which countries have the most effective and transparent systems of reporting.

In many respects Von der Leyen faces a set of unique challenges that few other world leaders have had to content with. To begin with, it could be argued that the response to the coronavirus, by definition, has constituted an attack on the foundations of the European Union. One of the key policies of the EU is that of the Schengen Area, an area covering 26 European countries that have abolished border controls. However, the coronavirus has meant that Schengen area countries have reintroduced border controls. It’s hard not to think that this must have been a particularly uncomfortable moment for Von der Leyen and the European Commission. The fact that EU member states countries have closed their borders unilaterally undermined Von der Leyen’s, and by extension, the European Commission’s, position significantly.

Towards the end of March, the European Commission reported that tens of thousands of European citizens had been repatriated from abroad, with most flights being intra-European.  In addition, the commission said the EU “will secure financial support to partner countries amounting to more than €15.6 billion from existing external action resources.”  Score 5/10

Economic and social response: Even by early March, the European Commission’s economic and financial response to the pandemic had been largely piecemeal – on March 6th the commission announced that it would be ploughing a total of €47.5 million into 17 projects involving 136 research teams from across the EU and beyond, which would start working on developing vaccines, new treatments, diagnostic tests and medical systems aimed at preventing the spread of the coronavirus.

It should be pointed out here that Von der Leyen did not take the lead on the announcement of the funding for the research projects announced on March 6th – instead it was left to Mariya Gabriel, commissioner for innovation, research, culture, education and youth. The non-involvement of Von der Leyen is perhaps an indication that the commission was not treating the outbreak with the level of seriousness it warranted. But upon the announcement of €80 million of financial support to CureVac, a vaccine developer from Tübingen in Germany, for the scaling up of the development and production of a vaccine against the Coronavirus in Europe, Von der Leyen was front and centre. On March 26th Von der Leyen was able to announce the Coronavirus Response Investment Initiative to help direct €37 billion towards efforts to mitigate the impact of the crisis. Reaction to the commission’s Coronavirus Response Investment Initiative has been mixed however. Score 6/10

Innovation: It was arguably the commission’s announcement of the €100 billion state-supported short time work scheme called SURE on April 1st that has been Von der Leyen’s biggest public relations victory to date. Here the commission successfully harnessed an initiative that had initially been successful in Germany following the 2008 financial crisis and extended it across Europe. Clearly comfortable in front of the camera, a video of Von der Leyen extolling the virtues of SURE went down well, relatively speaking, on social media. It was a big boost for Von der Leyen – here she was on camera talking up the benefits of a scheme that has been widely praised, even by commentators in the UK, a country which is in the middle of the process of finalizing its departure from the EU. Score 9/10

Healthcare response: After the announcement of the €47.5 million announced on March 6th for the 17 projects involving work on vaccines, treatments, prevention and diagnostic tests, the commission then proposed legislation that would help airlines keep their ‘airport slots’ on March 10th. It appears that the commission’s initial concern was protecting industry, rather than rushing to protect the health of European citizens. Von der Leyen’s remarks on March 10th implied the commission was not yet clear on what its response should be from a healthcare perspective and three days later, the commission still seemed alarmingly leaden-footed on the issue. One week later Von der Leyen’s announcement of an “advisory panel on Covid-19 “composed of epidemiologists and virologists” came across as a rather too academic-oriented response to a problem that was crying out for some pragmatic action.

However, on the 19th, the commission started to bear its teeth with the announcement of the ‘rescEU’ stockpile of medical equipment – including ventilators and protective masks – to help EU countries. The commission said the initial budget of the stockpile was €50 million and it would include items such as intensive care medical equipment such as ventilators; personal protective equipment such as reusable masks; vaccines and therapeutics, and laboratory supplies. This represented a significant breakthrough for Von der Leyen who must have been frustrated, and more than a little worried, by the appearance of an EU that seemed to be utterly disunited at this point. A relieved Von der Leyen seized her first real opportunity to paint a picture of a truly united Europe. Momentum was building and, on March 27th, it was announced that the ‘rescEU’ budget would be increased to €80 million. Score 5/10

Balance between economic and healthcare response: The commission initially seemed at a loss at how to address the healthcare side of the pandemic and instead focused efforts on research into protection and vaccines as well as protecting airlines by helping them to keep their airport slots. However, there is a sense that Von der Leyen has been anxious to demonstrate the commission’s “human touch” throughout the crisis and ensure that sufficient empathy is expressed for the suffering involved. She has spoken of how health and supermarket workers are owed a debt of gratitude by Europe, and while such an acknowledgement counts in Von der Leyen’s favor, there has been little in the way of policies and initiatives to back this up. That said, rescEU was one example of the commission taking steps to obtain medical equipment that could help to alleviate people’s suffering. Where the commission is concerned, the healthcare response has been far outweighed by the economic one, the most eye-catching feature of which was SURE, the €100 billion state-supported short time work scheme. This showed Von der Leyen in her best light, speaking calmly and reassuringly about a scheme that, in theory at least, bring some much-needed relief to European citizens faced with the worry and anxiety of unemployment. Score 6/10

Honesty and truthfulness: Communication is undoubtedly one of Von der Leyen’s strongest attributes. At one point in the crisis, she was appearing daily in European Commission videos on social media, giving updates on the latest developments – whether it was the benefits of the new SURE scheme or trying to expose myths about the coronavirus. Judging by the number of views, a number of the videos were a success and proved to be an effective platform for an accomplished media performer who effectively transmitted a sense of calmness, but also concern. There is no doubt that she was looking a little vulnerable at the start of the crisis as the ropes binding the EU member states started to fray, but Von der Leyen steadfastly stuck to the task of talking up European solidarity, while having the integrity to acknowledge that Europe had been ill-prepared for the pandemic. Over time, the mood has changed and as more and more European member states have increasingly started working in unison, Von der Leyen has seldom missed an opportunity to highlight examples of European unity. To her credit, she never tried to deceive people into thinking that member states had at all times been working in harmony, but instead consistently appealed for a joined-up approach to tackling the pandemic. Score 9/10

Boldness/Risk-taking: The often pedestrian pace of the European Commission’s activities means that Von der Leyen herself has not been in a situation where she has been taking a massive individual risk at a policy level. Indeed, at the outset of the crisis, the commission’s response was perhaps a little too tentative and cautious. However, she has, on occasion displayed a willingness to be bold if necessary. When Europe was looking decidedly disunited immediately after the outbreak, instead of hiding from the limelight, Von der Leyen took it upon herself to become what sometimes seemed to be a lone voice exalting the benefits of a Europe that acts in a coordinated way. There was a time when the often repeated references to European “solidarity” started to appear a little desperate, but she held her nerve, and her faith, for the moment at least, appears to have been rewarded. In addition, despite the fact that hundreds of millions of people in Europe are suffering under lockdown, Von der Leyen has stressed her support for the measure by saying they should only be lifted if health services are able to deal with new infections. She has also consistently advocated member states coordinating their response to the pandemic despite the fact, at the outset at least, they were clearly focused on their own interests rather than those of their EU neighbours. Score 7/10

Success in saving lives: Given that the European Commission’s response to the pandemic has largely been economic, rather than health-related in nature, Von der Leyen’s ability to limit the number of fatalities has been limited. The closure of borders, for example, was the prerogative of member states, after all. That said, the impact of the coronavirus on Europe has been substantial, and many world leaders will be haunted by thoughts of what impact a more decisive response at an earlier stage in the crisis may have had. While, the practical actions Von der Leyen, and the commission, could have taken to save more lives may have been limited, it’s clear that more could have been done in respect of seeking to direct and influence member states’ responses in relation to limiting the impact of the pandemic. Score 6/10 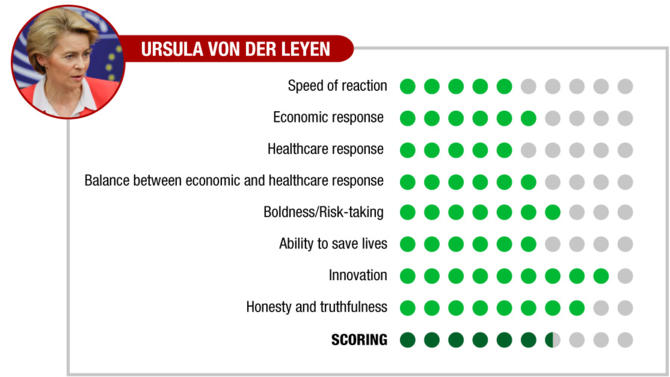