Christian Drosten is one of the world's most influential virologists and was responsible for the discovery of the infectious agents during the Sars epidemic of 2003. When he speaks, Germans, including Angela Merkel, tend to listen.

Speed of reaction: In early January, before the first case occurred in Germany, his team develop a Covid-19 screening test in record time, which was made available worldwide in mid-January. Despite being one of the most affected countries in Europe, Germany has a particularly low case to fatality rate. The rapid availability of the test and the massive screening campaign have been the pillars of German crisis management, with the Institute of Virology as its cornerstone. Score 10/10

Healthcare response: Christian Drosten was the first to define "the prevention paradox" during the lockdown phase of the crisis: "With the decline in statistics and the lack of saturation of the hospital system, people feel that the system has done too much. There is great political and economic pressure to get back to normal." He advocated a very gradual easing of the lockdown based on his belief that this is "theoretically the safest method," expressing doubts about a return to normal economic life, which he considered to be too premature. The virologist continues to advocate maintaining the restrictions until the virus "disappears". Faced with criticism, he stated: "I am not a politician, I am a scientist. I can explain things as a virologist. There are other matters beyond my area of expertise. I have no political mandate." His role propelled him to the rank of one of the major scientific figures of the crisis, both in Germany and internationally. Score 9/10

Innovation: His approach is that of a meticulous scientist who knows all the latest research, who formulates hypotheses and who constantly questions the current state of knowledge on this virus.
In late February, he launched a daily podcast called "Das Coronavirus-Update" in collaboration with the public radio station NDR, which is now followed by tens of thousands of Germans. There, he breaks down the latest information, comments on developments and gets to the heart of the issues affecting humanity in a simple and objective way. Two episodes were sufficient for it to become the most popular Apple podcast in Germany. Throughout this daily 30-minute programme, the virologist answers questions asked by science journalists and listeners alike. Score 10/10

Honesty and truthfulness: After his team was the first to identify the Sars virus in 2003, Drosten immediately made his research public, even before it was published in the scientific press. As a member of the Covid-19 taskforce, he advocates an approach based on transparency. His major contribution to the national crisis management plan is widely recognized. Germany's health response is considered exemplary and public opinion is beginning to discover who Christian Drosten is. He is on every front. He is clarifying, anticipating, advising and above all demystifying and rectifying matters. His honesty is praised because he never hesitates to acknowledge the unknown. He knows that his intellectual honesty does not always receive positive feedback: "Some say I am the merchant of doom and gloom ruining the economy," he says. Score 9/10

Boldness and risk-taking: Christian Drosten is a scientist firmly rooted in a fact-based approach. He believes that risk management depends on a country's ability to contain an inflationary rise in the indicators of pandemic virulence. Faced with the "prevention paradox", he is in favor of a very gradual deconfinement and fears a second pandemic wave. He believes that rapid economic resumption is likely to cause a second pandemic wave that will be disastrous for the country. So far, the virus has not been defeated and no one can foresee the challenges that lie ahead for not only Germany, but for the whole world. Score 7.5/10

Success in saving lives: The government has great confidence in the virologist's advice. Christian Drosten has undeniably become one of the most eminent scientists involved in this crisis. As the pandemic has taken a heavy toll on Germany and caused general astonishment, information overload and heated debate, Christian Drosten's singular and outspoken honesty has certainly played a decisive role in ensuring that the Germans respected the confinement measures and maintained a sustained national debate. Score 10/10 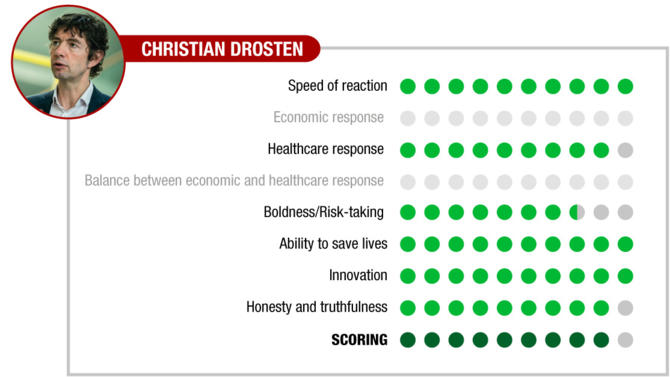