We look at the man who has headed the US’s National Institute of Allergy and Infectious Diseases since 1984. 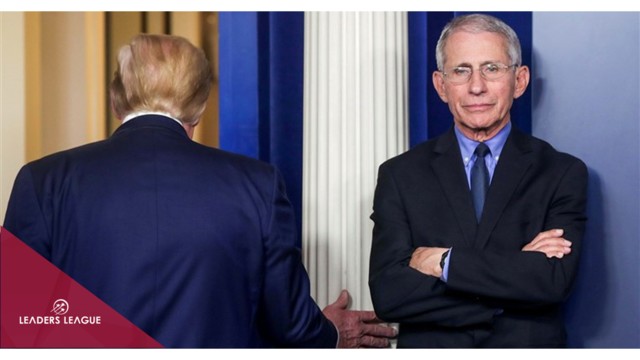 36 years ago, a mild-mannered scientist named Anthony Fauci assumed the directorship of the National Institute of Allergy and Infectious Diseases (NIAID). One wonders if he foresaw that he would, in this capacity, be adviser to presidents Ronald Reagan, both George Bushes, Bill Clinton, Barack Obama, and now – most challengingly – Donald Trump.

Fauci’s global popularity at the age of 79 has two obvious roots. The first is the contrast he makes with the current President: Fauci’s cautious, precise tone could not be more different from Trump’s blame-slinging and bloviation. He rose to particular fame internationally when, on 20 March, he appeared to “facepalm” behind Trump in dismay when the President made a reference to the “deep state” (a conspiracy theory involving an alleged cabal in the administration attempting to overthrow Trump) during a speech. The gesture seemed to encapsulate the feelings of many Americans regarding Trump’s propensity for personal paranoia even at a time of national crisis. Fauci hasn’t been universally popular – his differences with Trump led to death threats and the need for a security detail – but he has always put science and safety first, and has no doubt had a calming effect on those who have seen his addresses.

The second root of Fauci’s popularity now can be found in the difficult days he went through in the late 1980s. As one of the leading researchers and public faces during the AIDS epidemic, Fauci was a lightning rod for criticism: high-profile activist Larry Kramer called him an “incompetent idiot”, compared him to Holocaust organizer Adolf Eichmann, and went on to publish an open letter in 1988 that read, “Anthony Fauci, you are a murderer”. Yet Fauci had no control over the drug-approval process, the tortuous nature of whose testing stages prevented most patients from qualifying for trials. Desperate victims were trying testing-stage experimental drugs, which barred them from access to tests for other experimental drugs. And time was running out: the AIDS virus killed its victims within weeks.

The severity of the virus changed Fauci’s thinking significantly, transforming him from a typically cautious scientist into a hands-on quasi-activist, inviting AIDS protest leaders into his office and asking the police not to arrest them. “That began a relationship over many years,” Fauci told Holy Cross Magazine. “They let me into their camp. I went to the gay bathhouses and spoke to them. I went to San Francisco, to the Castro District, and I discussed the problems they were having, the degree of suffering that was going on in the community, the need for them to get involved in clinical trials… And I earned their confidence.”

He really did earn their confidence, and, almost by proxy, the confidence of America. The outspoken Kramer went from calling Fauci a murderer to calling him “the only true and great hero” among all government officials. And Fauci, showing a typical lack of ego towards the man who had so publicly berated him, said in 2002: “In American medicine, there are two eras: before Larry and after Larry. There is no question in my mind that Larry helped change medicine in this country. When all the screaming and the histrionics are forgotten, that will remain.”

Fauci’s stance on stamping out viruses and minimizing harm to humans is clear in his response to coronavirus. For one thing, as more of an official government spokesman than he ever was during the AIDS crisis, he has been transparent with scientific and mainstream media, subtly using them as channels to clarify and sometimes counteract the President’s pronouncements. For another thing, the NIAID was responsible, along with biotech firm Moderna, for the first US vaccine to undergo clinical trials, as early as March; in April, Moderna received $500 million in federal funding for the vaccine. Fauci is clearly in favour of putting government money where his mouth is, and it may be paying off: Moderna now has the green light to commence the second stage of testing.

The 79-year-old, who is in charge of a $5.9 billion budget, has also pulled no punches when condemning potential government inactivity. “Shame on us,” he told the National Geographic earlier this month, “if we don't have enough tests by the time this so-called return might occur in the fall and winter.” He has also indicated his expectation that the virus will still be present and deadly as late as autumn, providing a much-needed dose of reality to Trump’s baseless assertions of the virus’s impending extinction.

“I give the appearance of being optimistic,” Fauci has said. “But deep down, I just do everything I possibly can, assuming that the worst will happen, and I’ve got to stop the worst from happening.” Yet some of his more “optimistic” talk is realistic, such as his hope that a vaccine, perhaps Moderna’s, could be ready for public consumption by January 2021, which would be record-breakingly rapid. This balance of positive, determined thinking and well-informed caution is what all populations need; the American people are lucky to get it straight from the horse’s mouth.