Some of the world’s most prominent business-people have donated to coronavirus relief, but will these laudible gestures deliver meaningful results?

Speed of reaction: Twitter founder Jack Dorsey gets the plaudits for making the biggest donation to the coronavirus effort at €1 billion, around 25 per cent of his net worth. However, the response was undoubtedly slow. Dorsey announced the donation (on April 7th), despite the fact that, the first reported case outside of China came on January 13th (in Thailand), almost a full three months before Dorsey's announcement. It could be argued that Dorsey made the donation as soon as it became apparent that the coronavirus was going to have a major impact on the US, the country of his birth, and, perhaps more significantly, the headquarters of the business that made his fortune. However, while the US is indeed the country with the most Twitter users (59 million), the majority of the social media network’s 152 million ‘monetizable daily active users’ are based outside of the US. However, in Dorsey’s defence, it can be argued that the sheer size of the donation he made – which dwarfs all others made by individual donors – makes him immune to any criticism regarding any perceptions of his response being tardy. In addition, it should also be pointed out that far richer individuals than Dorsey have made much smaller donations, or indeed no reported donations at all.

In the case of Azim Premji, the India-based billionaire, his €132 million donation was announced a few days earlier than Dorsey’s. While Premji may score more highly than Dorsey in the “speed of reaction” stakes, the infinitely larger donation made by Dorsey more than offsets any negative perceptions that may have arisen due to his slightly slower reaction. In addition, Premji’s donation represented a much smaller proportion of his net worth (just over 2 per cent) than Dorsey’s.

Economic/social response: Dorsey’s €1 billion donation is undoubtedly impressive and puts him head and shoulders above other individual donors. Equally impressive has been the approach of publicly sharing details about how Dorsey’s donation – which has been ploughed into a fund called ‘Start Small’ – has actually been spent. So far, ‘Start Small’ has provided backing to a number of initiatives including, for example, €2 million for the Los Angeles Mayor’s Fund for domestic violence victims, and €2 million for Direct Relief’s ‘Team Love’ initiative. The fund has also provided support to ‘GiveDirectly’, which is “supporting cash transfers to low income families in the mainland US as well as in Puerto Rico”. However, there is an important caveat, pledging donations is one thing, actually distributing the funds and putting it at the service of those in need is another. While, Dorsey has made a €1 billion donation, as of April 21st, just €8.1 million had actually been dispersed. However, it is early days. It is also worth noting that, the ‘Start Small’ fund will, according to Dorsey, begin to focus on issues such as universal basic income.

Premji’s donation was focused on providing medical-related support, rather than providing a significant economic stimulus. A statement from the Azim Premji Foundation said: “These resources will help enable the dedicated medical and service fraternity in the frontline of the battle against the pandemic and in mitigating its wide-ranging human impact, particularly on the most disadvantaged of our society.” Forrest’s donation was focused on the provision of medical supplies and equipment. Score: 7/10

Healthcare response: Individuals making major donations to the anti-coronavirus effort generally tend to want to channel the funding into healthcare or social measures. Dorsey’s ‘Start Small’ fund has given out small amounts of funding to a range of different causes including the provision of shelter, food, clothing, counseling and medicine for the homeless, ‘and at-risk’ and trafficked youth. In addition, the fund has also financed projects proving medical kits and testing capacity in the Caribbean.

Premji’s contribution also had a strong healthcare, rather than economic, focus. Upon the announcement of the donation, the Azim Premji Foundation said: “These resources will help enable the dedicated medical and service fraternity in the frontline of the battle against the pandemic and in mitigating its wide-ranging human impact, particularly on the most disadvantaged of our society.” It continued: “Integrated action will be taken for a comprehensive on-the-ground response in specific geographies, focused on immediate humanitarian aid, and augmentation of healthcare capacity, including containing the Covid-19 outbreak and treating those affected by it.”

As for Forrest, again the donation was directed specifically at healthcare measures, in particular the provision of: one million N95-equivalent face masks, 400,000 surgical masks, 2.3 million medical-grade gloves, 100,000 nasal swabs, 200,000 medical coveralls, 10,000 medical goggles, 5000 touch-less thermometers and over 33 intensive care unit-grade ventilators. The speed with which the supplies arrived following the announcement is worth noting, with planes carrying supplies from China landing in Australia within 24 hours. Score: 7/10

Innovation: Dorsey, in contrast to say, Bill Gates, who has provided funding to some long-established institutions, such as the WHO, has sought to provide smaller amounts of funding to a wider range of innovative, smaller-scale organisations that provide support at a more grass-roots level. Dorsey should also be applauded for the innovative way in which he has allowed the public to keep track of disbursements from the fund on a shared spreadsheet. Score: 6/10

Balance between economic and healthcare response: Bar a very small number of exceptions, the donations of the major individual donors have been overwhelmingly directed towards the healthcare aspects of the crisis. This is perhaps unsurprising given that research has shown that healthcare is one of the most popular causes when billionaires decide to make donations. A 2020 study by Rockefeller Philanthropy Advisors and Campden Wealth showed that healthcare was the second most popular cause among billionaire donors after education. In contrast, only 8 per cent of billionaires’ donations go to community and economic development initiatives. The study also showed that donors motivated by leaving a legacy were more likely to donate to causes related to arts, culture and sports, rather than initiatives tackling social inequality, for example. However, it should be noted that some of Dorsey’s donation has been used to support cash transfers to low income families. Score: 5/10

Honesty and truthfulness: In some cases, it may be simply too early to assess major individual donors “honesty and truthfulness”. To an extent the jury is still out. While Dorsey, for example, may have grabbed many headlines – while also turbo-boosting his public image – by making €1 billion available to tackle the coronavirus pandemic, it should be noted that, to date, only €7.1 million has actually been disbursed. So, doubtless, the members of the public will be anxious to hold Dorsey to his word and satisfy themselves that all of the money pledged is actually dispersed. That said, Dorsey must be applauded for the transparency of his ‘Start Small’ fund, particularly the shared spreadsheet that allows the public to monitor donations. Similarly, the details of Forrest’s donation – particularly the figures for the specific types of equipment that would be acquired – gives the impression that he wanted to ensure that there was a high degree of transparency in relation to the contribution. Score: 7/10

Boldness/Risk-taking: There is no doubt that Dorsey, in particular, is taking a bold step in donating a quarter of his fortune to the coronavirus effort. In addition, he is taking a risk in the sense that he is handing the money to other parties in the hope, and expectation, that they use the money efficiently and effectively to tackle the coronavirus. On the face of it, Forrest seemed to be looking to keep the risks to a minimum by using the funding to pay for concrete, clearly defined actions, that is, the shipment of millions of pieces of medical equipment on planes from China to Australia. Score: 7/10

Success in saving lives: Forrest’s acquisition of medical equipment could save the lives of many medical staff, who would then in turn be better able to deal with the tidal wave of unwell people who are set to inundate hospitals in the coming weeks and months. Similarly, Premji’s donation was focused on providing medical-related support. Score: 7/10 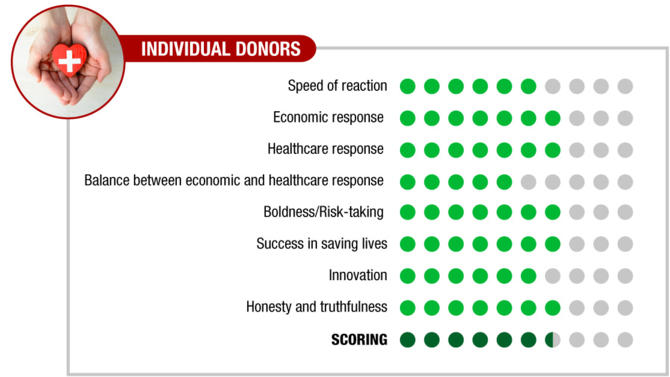