The most powerful man in the US has plunged his populace into not just mortal danger but chaos. We look at how. 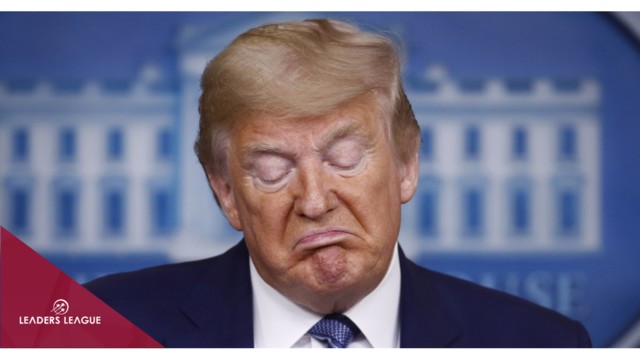 The coronavirus death toll in the US is, at the time of writing, 41,000. Including as-yet unrecorded deaths, the real toll is likely far higher. It’s worth comparing the US’s figures to those of its neighbors Canada and Mexico. 0.01% of America’s population has died from coronavirus, compared to 0.003% of the population in Canada and 0.0003% of the population in Mexico. Coronavirus deaths have been notably underreported in Mexico, but even so, there’s a stark difference between the three countries. The world’s richest nation should not be predicting a total of 69,000 deaths by August.

How did it get so bad in the US? Well, for national emergencies, a nation’s leadership must be held accountable. And charting Trump’s ever-changing stance on the threat posed by the virus is a fascinating exercise…

January 30th: “We think we have it very well under control. ” (The same day, the World Health Organization (WHO) declared COVID-19 to be “a public health emergency of international concern”, with almost 8,000 cases globally.)

February 2nd: “We pretty much shut it down coming in from China.” (The number of confirmed cases had doubled in the last three days.)

February 10th, 14th: “You know, in April, supposedly, it dies with the hotter weather. When it gets warm, historically, that has been able to kill the virus.” (The coronavirus death toll doubled between March 29th-31st and now, in April, is showing no signs of slowing.)

February 19th: “I think the numbers are going to get progressively better as we go along.” (At this point, there were 15 confirmed cases. This would rise to 68 by the end of the month, including one death.)

February 27th: “It’s going to disappear. One day, it’s like a miracle, it will disappear and you’ll be fine.”

March 3rd: “They’re gonna have the vaccines relatively soon. Not only the vaccines, but the therapies. Therapies is sort of another word for cure.” (There is very little chance of a vaccine being ready and regulatorily approved for public consumption by the end of the year.)

March 4th, 6th: “We’re talking about very small numbers in the United States. Our numbers are lower than just about anybody’s.” (17 had died in the US, compared to none in many countries.)

March 11th: “We are responding with great speed and professionalism.” (Between 8-11 March, 77 Americans were tested for coronavirus – not even two people per state. The US fiscal stimulus, though historic in its scope, would not be passed for another two and a half weeks.)

March 13th (when asked about the lack of testing): “No, I don’t take responsibility at all.”

March 17th: “This is a pandemic. I’ve felt it was a pandemic long before it was called a pandemic. All you had to do is look at other countries.” (Four days before, when the WHO declared it a pandemic, Trump said: “I’m not concerned at all.”)

Unquestionably, Trump’s vacillations – and the lack of emergency response that accompanied them – will cost many thousands of lives, not to mention the economic damage that will ensue from the lockdown, whose length is proportional to its lateness. It took mere days – which feels like both an eternity and no time at all – for Trump to go from promising to get the economy resuscitated by Easter Sunday to telling reporters, “We lose more here potentially than you lose in world wars.” (The US suffered 116,000 deaths in the First World War.) According to a poll by Pew Research Center, two in three Americans think Trump was too slow to address the threat of the coronavirus in the US.

Two in three Americans also think state governments will lift restrictions on public activity too quickly – and this was before Trump began to actively encourage anti-lockdown protests in mid-April in three (Democrat-governed) states: Michigan, Minnesota and Virginia. The estimate of 69,000 deaths will be the outcome if lockdown and social distancing guidelines are rigorously adhered to for several months. Meanwhile, the US economy has been in freefall, with a historic $2.2 trillion fiscal stimulus inducing a much-needed but altogether modest fillip to the stock market. Everyone knows that even $2.2 trillion is not only insufficient but unpunctual: many families are still waiting for their one-off $1,200 paycheque, which itself will fall far short of what’s needed to cope with several months of hardship.

Speed of reaction: If Brazilian leader Jair Bolsonaro were to get 1/10, Trump is admittedly a cut above – but the US’s high death toll is due in large part to his procrastination and his taking weeks to acknowledge the pandemic’s severity. Score 2/10

Economic response: Behind the sheer size of the $2.2 trillion stimulus, which Trump signed off on but had little input in, there is little to take succour in. One-time $1,200 paycheques, delivered well after 3.3 million Americans had filed for unemployment benefits, are clearly insufficient to live on for months at a time, especially when many of those cheques have taken weeks to arrive. Trump’s removal of Glenn Fine, the independent overseer of proper allocation of much of the $2.2 trillion, was a dark herald of the president’s propensity for evading scrutiny. Trump has also voiced his support for aid for cruise lines, though fortunately the major cruise companies have been left out of the stimulus package because they are registered abroad for tax reasons.

The small-business provisions of the US’s fiscal stimulus were surprisingly generous: conditions of access to the $350 billion fund stipulated that any company with fewer than 500 employees can apply for a $10 million loan that, if used for rent, utilities, mortgages and/or eight weeks’ worth of payroll, will be forgiven. Applications are welcome until the end of June – which could essentially give small companies two months of federally funded operations. But by mid-April, the $350 billion fund had run out of money.

Most states have taken action to protect renters from eviction – but almost 1 in 4 states haven’t, with the already limited CARES Act being flouted by numerous landlords, leading to well over 100 evictions already. Score 4/10

Healthcare response: Again, 1/10 is reserved for Bolsonaro, with countries such as Sweden that have persisted with herd immunity in the face of enormous death tolls scoring 2/10. Nonetheless, the US has performed poorly compared to its neighbors and the rest of the world, especially considering it’s the world’s wealthiest nation. A country most of whose principles are founded on individualism is almost inherently ill-equipped to deal with nationwide crises that require strong state intervention. Score 3/10

Innovation: The US is indisputably a global hub of innovation, and Trump has already signed a $456 million deal with Johnson & Johnson for a potential coronavirus vaccine – perhaps prematurely, since the drug wasn’t even in clinical trials at the time. Nonetheless, US pharma giant Gilead Sciences’s drug remdesivir has been widely noted as having had promising results in animal trials; so far the US has been one of very few countries to be administering it (though its use was suspended in late March for supply reasons). Outside of pharmaceuticals, the US’s response has hardly been innovative – its marshalling of healthcare resources has been as ungainly as one might expect, with significant shortages of personal protective equipment (PPE) for healthcare professionals and ventilators for those in urgent need. Score 5/10

Honesty and truthfulness: As explored at the outset of this article, the coronavirus crisis did not make an honest man of Donald J. Trump – and so, when all is said and done, 1/10 seems as accurate an assessment of his honesty as ever. An analysis by the Washington Post concluded that in Trump’s first three years as president, he made 16,241 false or misleading claims. That’s almost 15 false or misleading claims every day, 365 days a year. Score 1/10

Boldness and risk-taking: Trump loves taking risks; unfortunately for the American people, he has a history of taking the wrong ones. America has long suffered for its exceptionalism, and with Trump’s personal sense of exceptionalism thrown into the mix, the combination is literally lethal. Certainly the USA’s hypocrisy is bold: it purchased ventilators from a Russian company it had blacklisted, while aggressively withholding ventilators and other medical supplies from countries it’s trying to pressure into regime change, such as Cuba and Nicaragua. Score 3/10

Success in saving lives: The countless healthcare professionals valiantly battling the virus have been let down by their president, who – along with the country’s deeply conservative media – is squarely to blame for downplaying the virus when it mattered most. 41,000 deaths in the world’s richest country is deeply shameful. Score 2/10

The fact that 1 in 10 Americans is unemployed is not good news for Trump given the upcoming November election, though his defeat is certainly not a foregone conclusion. Fox News, an unwavering propaganda machine for the GOP, will do its best to downplay Trump's abysmal response while smearing his rival Joe Biden. Trump's own chief propaganda channel, his Twitter account, is still inspiring fervour among his fans. And major national crises often lead to support for the incumbent for reasons of perceived stability. Perhaps the electorate will opt for Biden, a relic of the stable Obama years; or perhaps they'll opt once again for the strongman in the wake of national danger. We will have to wait and see.