Guo Guangchang (Fosun): “Fosun is more than a student of Buffett’s” (Part I)

Fosun is a product of and testimony to China’s economic miracle: founded in 1992, today it is China’s largest private-owned investment conglomerate with investments of approximately $31 billion in M&A. Its co-founder and Chairman, Guo Guangchang, is a discreetly ambitious, down-to-earth visionary, whose business model seeks to exemplify social responsibility and philanthropy. 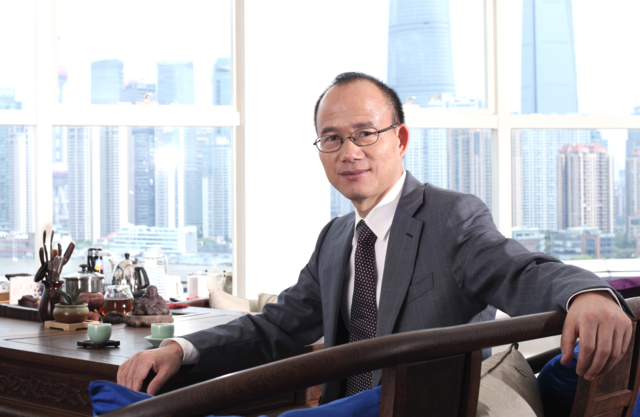 In the first part of the interview, Guo Guangchang sheds some light on the investment strategies of Fosun, and also talks about Buffett and Tai Chi. Passionate topics!

In the second part of the interview, he explains how Fosun evaluates an investment project and encourages team collaboration, why he still believes in the momentum of China and which investment makes him most proud.

Leaders League. What are your investment strategies?

Guo Guangchang. Our current strategies are very specific and well-defined, namely being the commitment to the “insurance + investment” strategy underpinned by twin drivers, one being “insurance-oriented comprehensive finance” and the other “China-rooted investments with global industrial integrated capability.”

As such, insurance and comprehensive finance firstly represent the most crucial direction for Fosun’s current and future investments. Currently, Fosun has invested in seven insurance companies domestically and internationally, including Yong An Property Insurance and Fosun Pramerica Life Insurance in China, Peak Reinsurance in Hong Kong, Portuguese comprehensive insurance company Fidelidade, specialty insurance company Ironshore and property insurance company MIG in the United States, as well as Israeli comprehensive insurance company Phoenix Holding. Fosun has also invested in several German and British private banks, namely BHF Kleinwort Benson Group and H&A. As of now, Fosun’s sizable, global comprehensive financial platform centered on insurance has developed an initial profile, and the investment projects have also demonstrated positive trends of development. For instance, the Portuguese firm Fidelidade, in which we have invested over EUR 1 billion, and in which Fosun owns 84.986% of equity interests, achieved net profits of over EUR 100 million and approximately EUR 210 million in 2014 and the first half of 2015, respectively. Moving forward, Fosun will continue to designate insurance and comprehensive finance as its most crucial investments, and will continuously enhance its efforts to combine the resources available in the global financial market with China so as to contribute to the development of the domestic financial market.

In terms of investment, Fosun has always been committed to combining China’s growth momentum with global resources. In other words, we hope that the enterprises, products and services in which Fosun invests are capable of meeting the demands of the general public in China and adding to the escalation of China’s momentum. Therefore, we have put forward the concept of “CIPC”, which means going from Consumer demands (C) to Investment (I) and then onward to Products and services (P), and finally back to Consumers’ needs (C). At present, we believe that the largest demands from Chinese consumers arise in Healthcare and Happy & Fashionable Lifestyle, two areas in which Fosun’s investments are concentrated. For this reason, Fosun owns Fosun Pharma and Sinopharm Group, and has invested in United Family Hospital, the largest Portuguese healthcare chain group Luz Saúde and Guahao.com, among others. Fosun has already gained very extensive expertise in its Healthcare segment, and hopes to undertake even more. Regarding its Happy & Fashionable Lifestyle segment, Fosun has likewise privatized France’s Club Med, and invested in Atlantis Hotel in Sanya, Britain’s Thomas Cook and Canada’s Cirque du Soleil, Hollywood movie production company Studio 8, as well as American women’s apparel brand St John Knits. We have brought all these first-class happy and fashionable products and services from around the world to China in order to serve our Chinese customers.

Leaders League. You humbly call yourself a “Chinese Disciple of Buffett,” while Fosun is likewise named the “Berkshire of China.” What would be the unique strengths of yourself and Fosun if you were to one day surpass your “master” and source of inspiration?

G. G. Fosun is more than a student of Buffett’s. Over Fosun’s course of historical development spanning twenty-three years, we have always been learning from the world’s most distinguished enterprises such as Carlyle and Hutchison Whampoa. Fosun has now become clearly aware of its identity as a globalized investment group, and therefore when weighing different approaches, we realize that the “insurance + investment” model of Buffett and Berkshire is even more worthy of our study.

I believe that Buffett’s success does not lie in his being smarter than others, but rather in the fact that he is dedicated to a long-term, value-based investment discipline, is sensitive to the markets, rational and not greedy, has penetrating insights and demonstrates strong entrepreneurship. Therefore, we have been learning from Buffett’s model and attributes, rather than simply replicating what he has done.

In particular, Buffett’s success is also attributable to a factor that must not be overlooked: he has been steadfastly bullish on America and has always believed in his own country. Similarly, Fosun is firmly rooted in China, meaning that it is backed by one of the most vibrant economies in the world. As such, China’s momentum factor has become a unique strength possessed by Fosun.

On the other hand, Fosun’s management team also demonstrates an edge when compared with Buffett’s age. With this, we do not intend to say that we are better simply because of our younger age - the point is that we are capable of accepting even more novel concepts, such as VC investments. Since its inception over two years ago, Fosun’s Venture Capital Unit has invested in several dozen projects and we are continuously moving up our learning curve in this regard each day.

Leaders League. Tai Chi is an art of balance. As a Tai Chi-lover, how do you lead the enterprise to strike a balance between swift expansion or profit growth and risk management?

G. G. Tai Chi is indeed a very good sport for the body, but more importantly, the essence of Tai Chi is not defeating others through preemptive actions, but rather to act after deliberate consideration, meaning you have to experience a certain kind of change before reacting at a speed that nonetheless surpasses that of others. This also holds true from an investment perspective - it is never actually possible for us to be significantly faster than the market, as the intelligence and horizons of human beings are limited. However, you will be set to outshine the crowd if you can, when compared to others, develop a “faster sensitivity” to changes that you have become aware of - if you can gather experiences more rapidly than others amidst the changes - and if you are ready to make decisions amidst these changes. Indeed, you have dealings with the market on a daily basis and experience market changes on a daily basis - these feelings are just the same.

In addition, Tai Chi places emphasis on a kind of “internal cultivation”, a cultivation of your own mental power. Prior to the subprime mortgage crisis, many Americans were used to purchasing subprime bonds. They were then well aware that such practices were problematic, but they also knew that the bonus to which they were entitled for the year would diminish if they chose not to purchase. Consequently, their decision was based on short-term benefits and did not arise from their complete ignorance of the relevant risks. I feel that these people lacked mental power and had not cultivated their own self-awareness. Indeed, an elevation of your mental power is necessary for you to remain rational amidst surges of greed, to be courageous in times of fear, and to be able to admit to your own mistakes.

This article also appears in our fortnightly newsletter “Leaders Wisdom Journal”. To Subscribe.

Other articles of the same issue:

20 Entrepreneurs from 20 Nations (Part I)

Become a campaigner: use the fuel of Mission to advance your business