A French industrial group with a strong international dimension, Schneider Electric is a world-leader in energy management, industrial automation and services related to the energy transition. The group is following a sustainable development strategy, and intends to become carbon neutral across its entire ecosystem by 2030. Gilles Desroches, its head of sustainable development, spoke to Leader’s League about the company’s renewable energy activity in Europe. 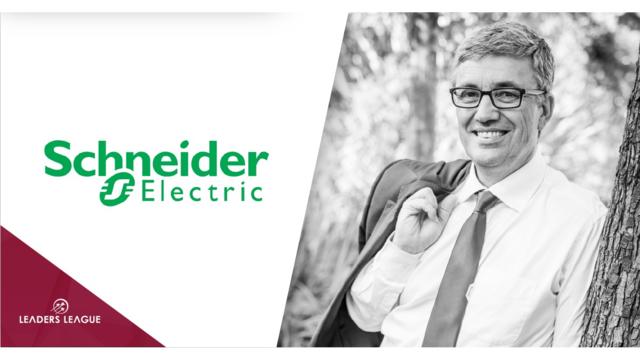 Leaders league. Why did Schneider Electric decide to get involved in Africa?

Gilles Vermot Desroches. Schneider Electric’s core business is based on electricity distribution that is as reliable, high-quality and green as possible, with a view to not only selling energy, but to ensuring the best possible use of that energy. For many years Schneider Electric has had subsidiaries and satellite offices in the majority of countries in Africa, as well as factories in Egypt, South Africa and Kenya. In recent years there has been a sea change in attitudes to renewable energy, which is attracting particular attention among Africans.

So, you have seen strong demand for renewable energy in Africa?

The continent obviously needs a much greater supply of energy than is currently available. More than 100,000 villages on the continent still do not have access to electricity. And, as between now and 2050 the urban African population is expected to double, the question of how to close the energy-supply gap in Africa is crucial. Today, more than 600 million people living in sub-Saharan Africa have no access to electricity, and all evidence points to the fact that a similar amount of people will still be without power by the middle of this century. Nevertheless, that means that over the next 30 years we will have bought electricity to an additional billion human beings. But in order to ensure this becomes a reality, we need to be connecting around 100,000 people per day. Most of the time, renewable solutions are chosen as it is these which provide electricity in a better way, power that is cleaner, digital and decentralized – the perfect embodiment of which is the mini-grid.

Can you tell us more about these mini grids?

Schneider makes a solar powered mini-grid called Villaya, which is a significant means of boosting the energy supply in remote zones which are off the traditional power grid. This equipment is assembled in our Kenyan factory and is a turnkey solution, equipped, as it is, with heat resistant sodium nickel batteries with an operational life 50 years. In addition, they are not harmful to the environment, even at the end of their life. In ten years the group has installed more than 700 such mini grids in Africa, mostly in rural areas. In Kenya, for example, more than 100 have been installed in schools, as part of a programme run in partnership with the ministry of education.
In Nigeria, the various regional governors have put in place local co-operatives to oversee the operation of mini-grids. Today, they are more affordable, but the challenge for Africa is to construct sustainable and profitable economic models which allow more authorities and organizations on the continent to buy these mini-grids.

What are Schneider’s long-term objectives on the continent?

First off, we want to train up more young Africans. We believe that this will be the cornerstone of the eventual electrification of Africa, where less than 50% of the population currently have access to electricity. The technology is there, the funding is available, what is still missing – and this is an essential part of the solution – is the mobilization of the population. Schneider Electric has set up sustainable energy training schemes tailored to numerous tasks, from the most basic to the most technical.
The second objective is to make a meaningful contribution to the start-up ecosystem, through our Energy Access Ventures Fund. This fund is based in Nairobi and has an investment capacity of $80 million. Its objective is to invest in companies that provide access to sustainable energy.
Lastly, we want to develop our range of sustainable energy products, which go from the Mobiya solar-powered lamp (which offers wireless lighting and has ports to charge one’s cellphone) to the Villaya mini-grid. We want to allow people who live in villages to continue to do so by providing them with a basic level of electrification, so they can improve their lives, communicate with the outside world and be able to engage in an economic activity, even is its just pumping water or preserving food, for example. The goal is to guarantee the stability of individuals in the villages where they live.