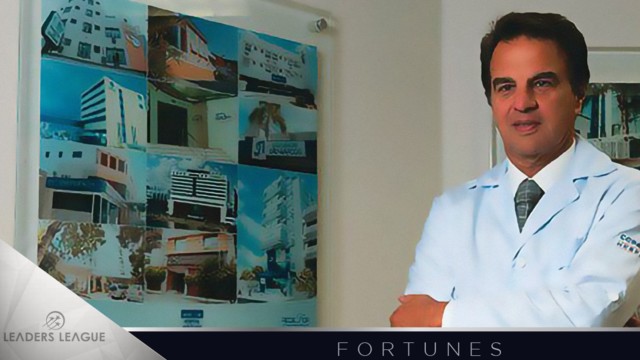 Despite the uncertain economic situation that has existed in Brazil for the past handful of years, the Brazilian entrepreneurial sector remains in rude health.

According to Forbes, the number of billionaires in South America’s leading country in terms of population and GDP shot up from 45 to 65 between 2020 and 2021.

If, as a founder of Facebook, Eduardo Saverin enjoys a high profile, the country’s second-richest individual is little known outside his homeland. His name? Jorge Moll Filho, a 77-year-old cardiologist with a knack for keeping money, as well as blood, pumping.

Already a successful physician, Filho’s initial corporate incision was made in 1977 when, aged just 33, he began to acquire clinics and laboratories in his home city of Rio. Little by little over the next few decades he bought up the majority of the medical facilities in his home state of Rio de Janeiro, becoming a billionaire in 2014.

Filho’s next move really solidified both his and his company’s success. In 2015 Rede D’Or bought rival healthcare group Sao Luiz’ portfolio of Sao Paolo-based facilities, a move that secured the newly minted Rede D’Or Sao Luiz’ position as one of the country’s main players in the private healthcare marketplace.

The company now has 14 medical facilities in its traditional fiefdom of Rio, the same again Sao Paolo, in addition to four in Pernambuco and three in Brasilia.

High standards of care
In a country where the public health service leaves a lot to be desired, and which has an expanding (and aging) urban middle class, there have been no shortage of takers for its services.

Rede D’Or Sao Luiz’ main business is to supply medical treatment, and it specializes in oncology, neurology, cardiology, gynacology and dermatology, providing services including including scans and surgery.

The group has also branched out into the lucrative business of medical training and has established a chain of drop-in radiotherapy and testing labs, as it continues its expansion.

Rede D’Or registered Brazil’s largest IPO in seven years last December, and the its fortunes have not gone unnoticed by investors, with the Carlyle Group and the Singaporean sovereign wealth fund having acquired stakes in the group.

These would appear to be winning bets, given that its market cap this year reached $22.5 billion which, although not enough to see Rede D’Or Sao Luiz spoken about in the same breath as US siblings CVS Health Corporation ($120 billion) or Health Group ($80 billion) is nevertheless enough to make it the biggest healthcare company outside of the United States. This has, unsurprisingly, made its founder, Jorge Moll Filho, who has an 18.7 share in the group he founded, a very wealthy man indeed.

The Filho family patriarch has also had the good sense to bestow a 3.1% stake upon each of his five children, ensuring that the founding family can protect Rede D’Or Sao Luiz from a hostile takeover for years to come. And with its portfolio of 30 ultra-modern hospitals across the country, the future looks bright for the Filho children and their far-sighted figurehead.