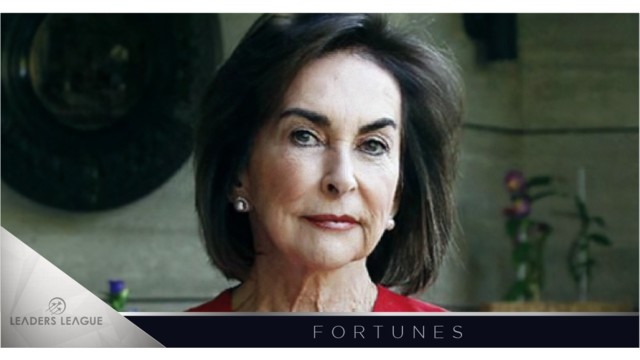 Chilean billionaire Iris Fontbona is the country’s wealthiest individual and Latin America’s richest woman, having assumed control, together with her three sons, of her late husband Andrónico Luksic Abaroa’s businesses following his death in 2005.

The family owns a majority stake in Chilean copper mining company Antofagasta, which is listed on the London Stock Exchange, and owns the Quiñenco conglomerate, which controls Banco de Chile, Madeco, a copper products manufacturer, Compañía de Cervecerías Unidas (CCU), which is the country’s largest brewer, and shipping company CSAV.

Media shy
Fontbona was born in 1942 or 1943, her exact age remaining a mystery, and she is reported to refuse all media interviews. She married her late husband in 1961, and who was the Chilean-born son of a Bolivian mother and Croatian father, and 15 years Fontbona’s senior.

Fontbana and Luksic had three children, Jean-Paul, Davor and Guillermo, but the latter died of lung cancer in 2013, aged 57. Andrónico Luksic’s son Andrónico, whose mother was Andrónico’s first wife, became the legal child of the couple at the age of seven, following Luksic’s marriage to Fontbona. Jean-Paul Luksic is chairman of Antofagasta, and his brother Andrónico is the director of Quiñenco. However, Fontbona’s approval is required on major decisions in both companies, according to media reports, but her indirect input has resulted in the family’s companies’ growth.

The growth of the family’s companies has included making Banco de Chile the country’s second-largest commercial bank, the expansion of CCU into the world’s largest brewer, and Antofagasta as the world’s largest copper mining company. The family also owns Dubrovnik-based Adriatic Luxury Hotels. Since her husband’s death, Fontbona has acquired a 70% stake in Chilean television station Canal 13. Despite the businesses’ growth however, Fontbona’s net worth has dropped from a reported $19.2 billion in 2011. According to Bloomberg, Fontbona’s wealth was impacted by the Covid-19 pandemic’s negative effects on the Chilean economy, suffering a reduction of some $2.6 billion in the first months of the health crisis.

Confirmed philanthropist
Despite Fontbona’s well-guarded privacy, and who divides her time between Chile, London and Liechtenstein, at home in Chile she is known for philanthropy as well as her wealth, and the family is a regular donor to the country’s annual Teletón campaign since 2010, a charity event that raises millions of dollars for the underprivileged. According to media reports, in the 2012 version of the event, Fontbona handed over an envelope of cash containing the Chilean peso equivalent of $2.3 million.

In 2014 she pledged to finance the construction of a school in Antofagasta, her home city. That pledge was followed by a commitment in 2017 to finance the school for the following three years.

The Luksic family also runs a charitable foundation, Fundación Familia Luksic, which is actually the umbrella foundation for six charities, the first of which to be founded, Fundación Luksic, was the brainchild of Andrónico Luksic Abaroa in the early 21st century. The foundations provide financing for educational and health, sports and entrepreneurship programs. The family also donated to assist reconstruction work in Chile following the 2010 and 2015 earthquakes, and for the reconstruction of a school following the 2017 forest fires.