Fortuna Silver Mines and Roxgold have entered into a definitive agreement to merge their businesses, under which Fortuna will acquire all the issued and outstanding securities of Roxgold. 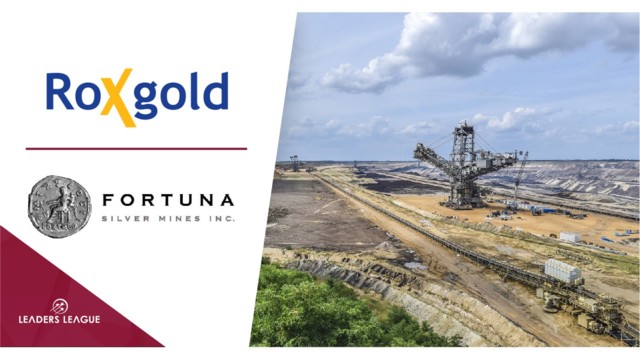 Based on the 20-day volume weighted average price of the Fortuna shares and the Roxgold shares on the TSX for the period ending April 23, 2021, the exchange ratio implies a premium of 40.4% to Roxgold shareholders. The implied fully diluted in the-money equity value of the transaction is estimated at approximately CAD$1.1 billion ($908,279,095).

The merger of the two companies creates a premier growth-oriented global intermediate gold and silver producer, well-positioned to pursue compelling organic and inorganic growth opportunities, with anticipated annual gold equivalent combined production of approximately 450,000 ounces, of approximately US$9505 per gold equivalent ounce, according to a statement by the companies.

The transaction brings together two highly experienced management teams with track records of value creation in the Americas and in West Africa. Fortuna will benefit from the in-region operating experience of key members of Roxgold’s team, according to the statement.

The resulting company will own a diversified, complementary portfolio of four quality operating assets and a development project in prolific jurisdictions.

In addition, the company will boast an attractive near-term free cash flow profile with a robust pipeline of high-upside exploration assets: Boussoura, a gold exploration project with a maiden resource expected in the second half of 2021, over twenty satellite targets identified at Séguéla, and an extensive portfolio of early-stage exploration assets in Côte d’Ivoire and Mexico.

“With Roxgold we are acquiring a complete business platform which brings low-cost gold production,  a permitted feasibility stage development project, a robust exploration pipeline, and key members of a seasoned executive team of proven mine builders, developers, and explorers in West Africa,” Jorge A. Ganoza, president and CEO of Fortuna, said.

“The combined company will be in a stronger position to continue accelerating the development of the Séguéla gold project at a lower cost of capital and aggressively pursuing the potential of a most exciting exploration pipeline in West Africa and Latin America,” he added.

“This transaction recognizes the commitment and execution of the Roxgold team and the value creation over recent years, as we advanced from developer to low-cost gold producer with a growth pipeline that few of our peers could match. The combination with Fortuna provides our shareholders with an immediate premium and a unique opportunity to participate in the creation of a new global mid-tier precious metals producer with significant organic growth and cash flow generating potential,” John Dorward, president and CEO of Roxgold, said.

Roxgold was advised in Canada by Davies Ward Phillips & Vineberg, with a team led by partners Melanie Shishler and Aaron Atkinson, and associate Shane Freedman.