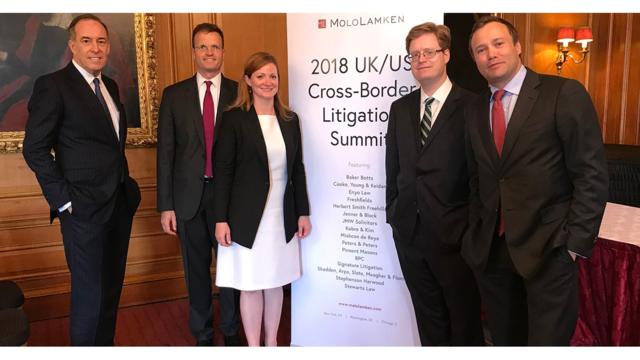 On 2 July 2019 at Gray’s Inn, MoloLamken hosted a summit on cross-border UK-US litigation, with a range of expert senior practitioners discussing various topics. Each topic was discussed for half an hour, and though no questions were solicited from the floor, there were three opportunities for attendees to mingle with each other and the panellists. Leaders League explores the key discussion points.

Chris Morvillo, a white-collar crime expert at Clifford Chance’s New York office, moderated a panel featuring MoloLamken’s Robert Kry and CMS’s Jeremy Mash that covered trends in M&A litigation. It appears that fraud in M&A is less common in the UK than in the US, where fraud prosecutors must establish both a fit mental state on the part of the perpetrator and the principle of “justifiable reliance” – that is, a victim of fraud justifiably relies on the fraudster’s (mis)representation of a given situation.

Warranty and indemnity (W&I) insurance is certainly an essential component of any M&A deal, but it can go only so far in covering the parties if elements of the transaction itself are suspect. When it comes to public company M&A in the US, there is an increasing number of lawsuits being founded on the charge of inadequate disclosure in proxy statements and tender offers. Despite these claims often being frivolous, often the key players in the merger settle with the plaintiffs, writing it off as a sort of “merger tax”. When such cases go to court and are thrown out, as has happened in Delaware, they are tried in federal court under securities laws, which have stricter disclosure requirements.

This discussion was chaired by MoloLamken’s Rémy Gerbay and featured Philippa Charles, Louis Flannery QC and Sarah Vasani at Stewarts, Stephenson Harwood and Addleshaw Goddard respectively. The Halliburton Company v. Chubb Bermuda Insurance arbitration, brought after the 2010 Deepwater Horizon oil spill, was used as a launchpad for the panel: the arbitrator put forward by Chubb and accepted by Halliburton was also acting for Chubb on another arbitration arising out of the Deepwater Horizon spill. In the Commercial Court, Justice Popplewell decided that this would not affect the arbitrator's impartiality, and that in fact it was “a regular feature of international arbitration in London that the same underlying subject matter gives rise to more than one claim and more than one arbitration without identity of parties”. This decision was upheld by the Court of Appeal. There is a Supreme Court appeal now pending.

Meanwhile, according to Flannery, all the arbitrations ended favourably for Chubb, possibly because of the asymmetry of information enjoyed by Chubb’s legal team – the arbitrator would be privy to information and arguments made in one Chubb case before they appeared in a later one.

All this raises two issues: that of multiple appointments in related cases involving the same party, and that of whether the test of apparent bias should be the same for judges and arbitrators. There is an argument that it should be stricter for the latter, since, in a case like Halliburton v. Chubb, the closed nature of arbitration makes the arbitrator privy to all the arguments in both cases. It’s an interesting enough case that both the ICC and the LCIA are intervening in the Supreme Court appeal.

The current direction of competition litigation

How to assess damages, especially from an individual’s perspective in a class action, was the starting point of this discussion, chaired by Herbert Smith Freehills partner Kim Dietzel and featuring Sir Christopher Bellamy QC (chair of the global competition practice at Linklaters), Robert Eisler (head of Grant & Eisenhofer’s antitrust practice) and MoloLamken’s Lauren Weinstein. The recent Mastercard class action regarding interchange fees was illustrative: at the Court of Appeal, for damages certification purposes, a reasonable methodology is all that's needed, and as far as individuals are concerned, the damages award is for the class and can be divided up later.

But according to the European Court of Justice, there should never be unjust enrichment; this is something the final ruling and damages valuations will have to take into account. Walter Merricks, a former financial ombudsman who is the lead plaintiff in this case, claims that the maximum pay-out would be around £300 for any adult who was demonstrably in the UK between 1992 and 2008 – including adults who never owned a Mastercard. The class action is being fully funded by Innsworth Litigation Funding. (There were quite a few litigation funder practitioners and business development heads among the event's attendees. Incidentally, Leaders League has been noted for its strong coverage of the litigation funding market in the UK and the US.)

In the US, federal law states that indirect purchasers are ineligible for antitrust claims – though this is not the case for at least 33 states. On the European level, there may well be different decisions on the Mastercard case made in different courts. These could differ not only between nations but between a given nation’s courts. It’s comparable with multi-district litigation (MDL) in the US. Nonetheless, once the ECJ establishes liability on a national level, it becomes a question of quantum.

Interestingly, Mastercard’s defensive strategy against retailers bringing lawsuits in the 2010s rested largely on a pass-on argument: the idea that the retailers passed Mastercard’s overcharge on to their own customers. This has been turned on its head by Merrick through his class action, of which the overall damages being claimed are – if Mastercard’s points about pass-on are correct – over £14bn.

There has been an increase in insolvency litigation in the US, according to Chicago-based Kirkland & Ellis partner Jeffrey Zeiger. From a panel that also included Morrison & Foerster’s Howard Morris, Peters & Peters’s Jason Woodland, and moderator Steven Molo from MoloLamken, it transpired that borrowers have been using covenant-light terms to do creative and sometimes fairly aggressive deals, leading to more insolvency litigation being brought before winding-up petitions.

Bank loans and bonds used to limit discretionary borrower activity, but lenders have largely stopped using these financial maintenance covenants; most covenants these days, it seems, relate to repayments. Lenders are now looking to litigation strategies to bring borrowers to the table.

The B-word was brought up: the European Insolvency Regulation, which came into effect in 2002, ensures mutual recognition of insolvency proceedings. Brexit would mean the UK would fall out of this convenient framework. The UK is a signatory to UNCITRAL rules on insolvency, which means we recognise insolvency proceedings abroad – but European lawyers will no doubt find UK law a pain in the posterior.

The latest on suits against banks

MoloLamken’s Justin Ellis moderated this panel, which featured Graham Huntley from Signature Litigation, Jonathan Cary from RPC and Chris Boehning from Paul, Weiss, Rifkind, Wharton & Garrison. Litigation funding formed a large part of this discussion: collective actions against banks in the UK, especially in a Section 90 context, are popular for litigation funders. Several cases have been able to be brought only because of third-party funding.

In the US, the financial services environment has been more lax under the current POTUS, with the Department of Justice focusing more on the opioid crisis and China. But anti-money laundering and sanctions attract a lot of bipartisan support, and may see more activity on the third-party funding front.

The collateralised loan obligation (CLO) market is fairly frothy, thanks to low interest rates; current corporate borrowing is eclipsing 2008 levels. Ellis pointed to liquidity risks for funds and mutual funds – though other sources would suggest that there is more dry powder globally than ever before. The extent to which a currently buoyant market will erupt in litigation when the downturn arrives remains to be seen; no-one discussed how the nature of the litigation might be different to the litigation seen arising out of the 2008 financial crisis.

Given the volatility of the current political climate, it will likely depend to some extent on the nature of the government when the downturn arrives. Leaders League is willing to bet that, given that these governments will likely lean towards the right of the political spectrum, the outcomes for banks will be less painful than some might expect – but that, after a short-term spell of caution on the part of litigation funders, class actions will continue.