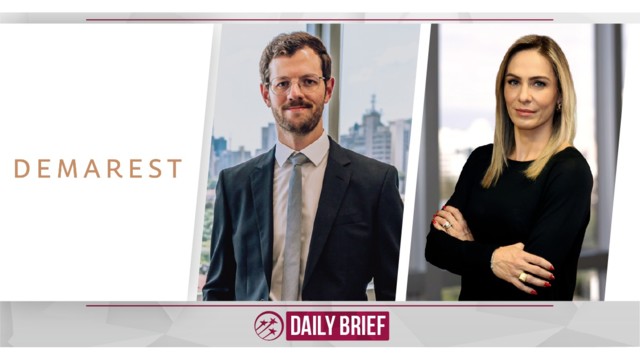 Mr. Paiva joins the firm to lead its TMT department, with over 16 years of experience in the legal market and valuable experience in projects related to the expansion of connectivity, the distribution of audiovisual content via different platforms, combating fake news and anti-piracy, among others. He has previously worked for major law firms, such as TozziniFreire Advogados and Mundie e Advogados.

Academically, Mr. Paiva holds a Bachelor of Laws from UniCEUB, an LL.M. in Constitutional Law from Universidade de Lisboa (Portugal), a doctorate degree in Philosophy from Universidade de São Paulo (USP), as well as a doctorate degree in Philosophy from Université de Paris I - Panthéon-Sorbonne (France).  In addition to his new partnership, he is also a member of the Brazilian Association of Information Technology and Communications Law (ABDTIC).

“The infrastructure sector has the potential to grow considerably in Brazil, attract even more investment and generate a positive impact on the economy. The hiring of Tomás reinforces our commitment to offering our clients a high-quality service focused on the area of telecommunications and disruptive technologies, which are expanding at a rapid pace and contribute not only to the country's strategic development, but also socially, with the increase in connectivity and digital inclusion”, stated Paulo Coelho da Rocha, Demarest's managing partner.

Angela Cignachi Baeta Neves arrives at Demarest Advogados as a new partner and head of the Brasília office, strengthening the firm’s tax and litigation practices, especially in cases before the Superior Court of Justice (STJ) and the Federal Supreme Court (STF). With more than two decades of experience in the field, Ms. Neves has previously led her own firms –  Eduardo Ferrão e Baeta Neves Advogados and later, Angela Ciagnachi Advocacia – before joining Demarest. Academically, she holds a Bachelor of Laws from UniCEUB and a Master’s degree in the Social Function of Law from FADISP.

Moreover, Ms. Neves is also a member of the Special Commission of Electoral Law at the Federal Council of the Brazilian Bar Association (OAB) and has been elected twice, as the most voted lawyer, to the position of substitute minister at the Superior Electoral Court (TSE).

“The arrival of Angela, who has expertise acting before the superior courts, reinforces our strategic planning, based on excellent technical criteria for the provision of legal services, and strengthens our practice in Brasília, which is essential to meet the needs of our clients”, added Mr. Rocha about Angela’s arrival.