China and India Lead the Way in 2017 KPCB Report

Mary Meeker delivered the Internet Trends 2017 report at Code Conference on May 31st. 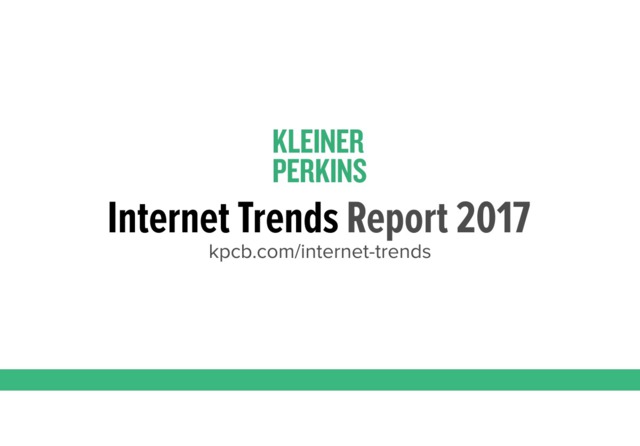 Since 2001, Kleiner Perkins Caufield & Byers has released an annual report on the internet trends to watch out for in the coming year. KPCB partner Mary Meeker delivered the 2017 report at Code Conference on May 31st.

The Internet Trends 2017 report, which includes everything from big-picture economic data to internet index data, highlights the progress China is making in internet-related commercial activities. Here are the main takeaways:

2.China’s mobile e-commerce led by giants like Alibaba is driving the fastest shift from bricks-and-mortar in the world. In addition, Chinese mobile payments are rapidly increasing driven by Alipay and Wechat.

3.In the sharing economy, China leads on-demand transport as bike sharing skyrockets. China now sees more on-demand car and bike trips than any other country, and the success of unicorn startups like Mobike indicates a continuous market trend.

As the report concludes, while China’s internet sector is entering a golden age of entertainment and transportation, the fastest GDP grower is actually India.

This emerging Indian market where lots of opportunities exist has huge potential. India has many similarities to China, in terms of demography, the bonus of a huge population, low labor costs, and large domestic demand. The number of internet users in India reached 3.55 million in 2016, an increase of 28%. Indeed, India has become the world's second largest internet market behind China. The time spent on Android phones is the second most in India, again after China. Many top international companies are fighting for a share in the Indian e-commerce industry, although some uncertainty remains, as nobody knows whether India will successfully copy the model of China.