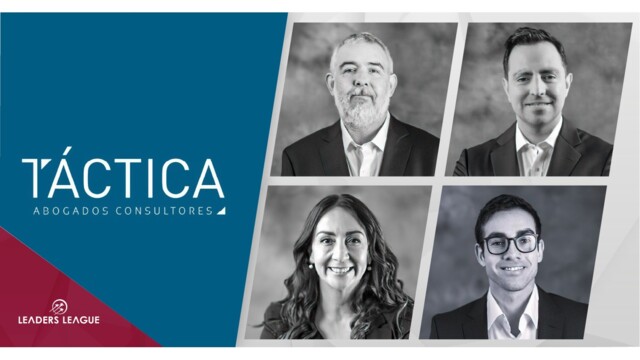 Cecilia is the head of Táctica’s public affairs practice, and prior to her latest endeavor she held the positions of minister secretary general of government, during two terms, from 2012 to 2014 and from 2018 to 2019, and minister of sports between 2019 and 2022. She has also been deputy director of the National Women's Service (2011), and was vice president of the Fundación Avanza Chile from 2014-2018.

She is an expert in political communication, design of relationship strategies, public policy management and the processing of legislative initiatives. Her skills also include crisis management and strategic communication consultancy, having formed and led numerous public-private working groups and challenges in conflict management.

She has ample experience in communication and media matters, having been a regular panelist in some of the most important radio and television programs on political and current affairs issues.

For his part, Rodrigo’s areas of specialization are telecommunications, energy, public law, antitrust and market regulation. He served for more than 15 years as executive director of the association of electricity companies, where he actively participated in the development and regulatory design of the electricity sector.

Previously, between 1999 and 2006, he was VP of legal and regulatory affairs of the telecommunications company VTR, a subsidiary of US-based Liberty Media, and where he was responsible for leading the regulatory challenges of the first massive development of broadband in Chile and VTR's entry into the market as the first major competitor in local telephony at a national level.

The other partners strengthening the firm are Ricardo Eberle, whose areas of specialization are administrative and economic law, telecommunications, energy, free competition and Regulated markets. He advises companies related to telecommunications, energy, agriculture, real estate and regulated markets in general. He served for more than 10 years as legal director of the Asociación de Empresas Eléctricas.

Jorge Uribe, also a partner at the firm, focuses on public law and governmental affairs, mainly in administrative law and regulatory matters, and he has extensive experience in electricity concessions, design of public policies, proceedings before regulatory authorities and in draft legislation.

He has served as legal director of the general secretariat of government (2018- 2022) and has been a lawyer of various state institutions, such as the national assets ministry and the electricity and fuels regulatory body. He holds a law degree and a master’s degree in economic regulation, both from the Universidad Adolfo Ibáñez.

And for his part, partner Christian Torres specializes in public policy design and analysis, interest management, strategic communication and negotiation. He is also an expert in crisis management and conflict resolution, and has more than 20 years’ experience in key positions in the public administration and in Chile’s Congress.

He has held the roles of chief of staff in a number of government ministries, and as a parliamentary advisor and coordinator of the strategic analysis unit of the Interior Ministry, among other roles, and holds a master’s degree in management and public policy from the Universidad de Santiago de Chile.

The law firm states that its “high-level expertise in legal and economic matters, as well as in crisis management and public affairs, allows the firm to offer advice that differentiates us from the market by reconciling the strictly legal field with strategic advice and interest management”.

“Our training, experience and specialization allow us to reconcile a specialized practice in regulated markets and antitrust matters, with a flexible offer in general corporate matters, strategic advice and interest management,” the Santiago-based firm added.