The US oil giant makes the energy sector’s first major transactional play of 2020. 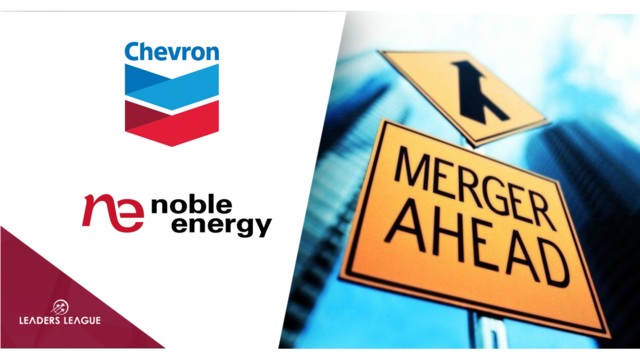 As global M&A markets begin to shake off a months-long virus-induced dormancy, oil major Chevron has acquired Noble Energy in a $5 billion all-stock transaction. Including debt, the deal value is worth $13 billion.

The year’s first major energy transaction, it will boost Chevron’s onshore portfolio in the US, giving it 92,000 acres’ worth of oil and gas assets in the Permian basin that the company claims are largely adjacent to its existing assets. The deal will also give Chevron assets in the Denver-Julesburg basin, a basin where Noble has fallen behind two competitors – Occidental and PDC Energy – that have themselves made major corporate plays in the last two years. Outside of the US, Chevron will pick up assets off the coast of Israel that provide gas to Israel, Egypt and Jordan, as well as scooping up assets in offshore Equatorial Guinea.

“The Noble Energy Board of Directors and management team conducted a thorough process and concluded that this transaction is the best way to maximize value for all Noble Energy shareholders,” said Noble CEO David Stover of the deal that will leave Noble shareholders owning 3% of the combined company. “We look forward to bringing together our highly complementary cultures and teams to realize the long-term value and benefits that this combination will deliver.”

This is a relatively conservative acquisition for Chevron, in line with its transactional strategy of late: it decided not to try to outbid Occidental Petroleum for Anadarko last year, a decision that led to Occidental buying out Anadarko for $55 billion – 11 times the size of the Noble deal. Analysts have noted that Chevron’s all-stock offer and reasonable premium are examples of a more modest kind of M&A that reflects both the current macroeconomic situation and Chevron’s general strategy.

There will likely be other large energy deals as the year progresses, probably higher-value ones, as the sector repositions itself after a spate of debt refinancing. Large-scale consolidation has been a hallmark of the sector for some time now, and targets’ valuations – dampened by a virus that’s showing no signs of going away imminently – will prove tempting for oil majors with healthy balance sheets.