The Boston firm continues to build one of its key pillars internationally. 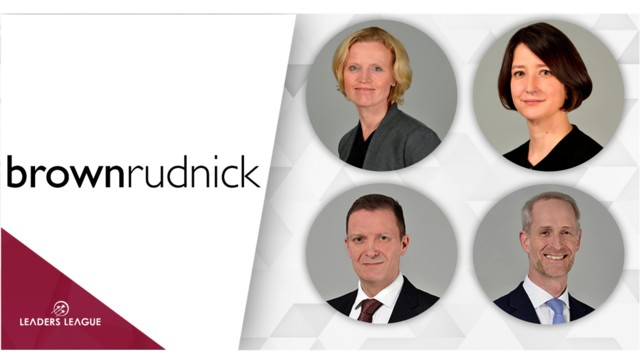 It’s no fun to recognize this fact, but now is a good time for firms to be building their restructuring capabilities. The coronavirus has not only brought numerous small and medium-sized companies to their knees, it has resulted in many large companies undertaking significant operational and financial restructuring. In Europe, Brown Rudnick, a firm that already has a strong name in this field, has been positioning itself accordingly.

Its most recent push began in November, when the firm tempted two lawyers away from Reed Smith in London: experienced partner Charlotte Møller and Monika Lorenzo-Perez, who had been counsel at the Pittsburgh-headquartered firm. Both have experience in complex cross-border restructuring across several industries; Møller claims particular experience in restructuring defaulting facilities and enforcement of security, and has advised chief restructuring officers, directors of distressed companies and insolvency practitioners.

Now, four months later, Richard Obank and Colin Ashford have joined the team in London from DLA Piper – thanks in part to Brown Rudnick’s more focused, less full-service strategy. Obank, who was named Lawyer of the Year in 2019’s Turnaround, Restructuring & Insolvency Awards, is especially well versed in the retail, manufacturing, hotels and leisure, and natural resources sectors, while Ashford is noted for his work on recoveries, investigations and contentious restructuring work.

Brown Rudnick, whose European restructuring and finance practice comprises 30 lawyers, distinguished itself at a fairly early stage by advising sophisticated debt players such as hedge funds. Its expansion on the continent has been relatively steady: it pulled two partners, Pierre-Alain Bouhénic and David Chijner, into its Paris office around 18 months ago, together with three counsel.

This means that for the last year and a half, a new partner has been arriving, on average, every three months in London or Paris. Bolstered by the firepower of the firm’s strong practice on the US’s East Coast, Brown Rudnick is poised to attract a strong client base in Europe – and for the next few months, there will be plenty of work to go around.

Didier Bruère-Dawson, head of the firm’s restructuring practice and based across London and Paris, says: “The coronavirus health crisis has led to an economic crisis with no historical precedent. The crisis is deeper: deeper revenue drop. Deeper fog. Deeper need for cash.

“In the financial market, some funds are cash-rich and ready to step in. We receive calls from clients who are waiting, looking at the market unfolding, and assessing who will need their assistance, what are the risks and the opportunities.

“Investing in today’s market is tricky: how can you form any meaningful business plan in such a foggy situation? Some sectors – airlines, cruise lines, tourism in general – will have zero revenue. Some corporations cannot get access to government-backed loans because banks aren’t sure how the money will be paid back. Some companies are perceived as future zombies [highly leveraged companies that can service the interest on their debt but not the debt itself].

“So how do you fund things in lockdown time, and then, how do you finance the post-lockdown rebound? We don’t know how long the lockdown will be. But financial restructuring and related litigation will last for years after the lockdown ends.”