On March 27, 2020, the new Legal Landmark for Franchising (Law No. 13.966/2019) came into force in Brazil, bringing welcome changes to the country’s franchising model. Brazil’s new franchising law aims, among other things, to regulate important aspects of the franchisor and franchisee relationship, as well as to bring more transparency to the existing business model. Considering the significant impacts of the new law on the Brazilian franchising market, Daniela Favaretto, fashion law and contracts partner of respected law firm Chiarottino e Nicoletti Advogados, authored the following article analyzing the main changes brought about by Law No. 13.966/2019. 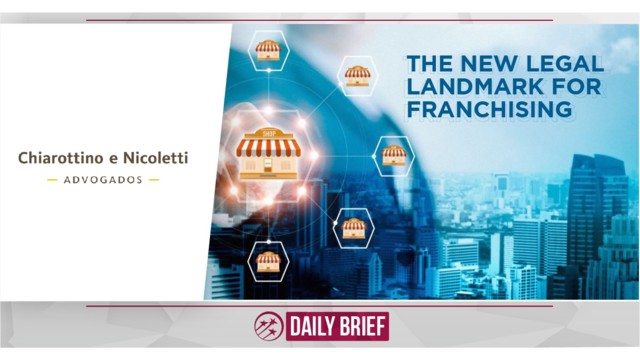 Twenty-five years after the first legal landmark, a new legislation was enacted in Brazil to regulate the business franchise system, which entered into force on March 27, 2020. The new law wholly repealed the previous legislation (Law No. 8,955, of December 15, 1994).

Certainly, the changes were welcomed. The franchise sector in Brazil is of great importance and has proven to be mature, resilient, and with a high capacity to adapt to the changes, even in unfavorable scenarios, such as the pandemic one that stagnated the business world.

In this sense, according to data released by the Brazilian Franchising Association (“ABF”), shortly after the decree of the pandemic state, 89% of the member units had already made the transition from physical to digital services, and several franchising businesses adopted the suspension of royalties and the marketing fund, and later developed strategies such as developing new products and new marketing channels.

In general terms, the new law, although simple, brought more transparency and legal security to this thriving market, which is capable of attracting attention from both the domestic and foreign markets.

The new law ended the discussions on aspects considered controversial in the relationship between franchisor and franchisee, namely:

(i) Lack of employment relationship between franchisor and franchisee or franchisee’s employees.

The new legislation highlights the economic independence of the contracting parties in article 1. The doctrinal and jurisprudential understanding on the subject was reaffirmed, with no further doubt that franchisees and franchisors are autonomous and independent entrepreneurs and even during the training period the franchisee shall only be liable for their employees;

The opinion of the Superior Court of Justice (“STJ”) that there is no vulnerability in the relationship between franchisor and franchisee was acknowledged. The fact that there is a standard agreement with pre-established clauses, by itself, does not make it an adhesion agreement because there is no insufficient part: both have contractual freedom to discuss and negotiate the terms of the Franchise Offering Circular (“COF”) and the franchise agreement; and

The new law clearly expressed in article 7, §1, the possibility, for the parties, to choose arbitration as a way to resolve any dispute. Previously, there were discussions about this subject due to the fact that some people defended that the franchise agreement was an adhesion agreement and, as such, it would not be an option to choose arbitration in agreements of this nature. However, it is important to observe, in the agreements, the provisions on §2 of article 3 of Arbitration Law, considering that the arbitration clause shall be expressed, especially for this clause, in an attached document or in bold, with the franchisee's signature or visa.

However, the main changes occurred in the COF, the most important legal instrument of this business model, as without the COF there is no need to talk about a franchise. It is this document that provides the alleged candidate to join a franchise system with legal, commercial and financial information, enabling the interested party to assess the risks and opportunities related to that business. In addition, it ensures, by the franchisor, the principle of contractual good faith set forth in the Civil Code.

In this sense, the new law enlarges the scope of article 2 (in the previous law it was article 3), changing from 15 to 23 items. Let's see some of the main changes and introductions brought by the new wording:

a) Complete list of all franchisees that integrate and/or joined the franchise network in the last 24 months, with name, address and telephone number. The previous legislation provided for the franchisor's obligation to inform for the last 12 months. This provision is extremely valuable, as this will enable the interested party to obtain information to verify whether the provisions described in the COF apply in practice;

b) Information about the territorial action policy, such as rules applied to company-owned units and franchised units, as well as penalties in case of non-compliance; and

c) Information on the status of franchised brands and other intellectual property rights. Regarding this point, the new law became broader. The old legal landmark required that only the franchised trademarks and patents registered or applied for before the National Institute of Industrial Property (“INPI”) should be included in the COF. Today, any intellectual property right owned by the franchisor shall be included, with a full description, before the competent body;

Regarding the new points introduced in the COF, although, in practice, many franchisors have already adopted them, the following points stand out:

1) Rules for transfer or succession of the franchised unit.

2) Indication of the circumstances in which penalties, fines, or indemnities, with their respective amounts, shall be applied.

Unlike other business models, the franchise relationship is complex, with many details and peculiarities. Still, this model is not flexible, that is, it does not allow for innovations by the franchisee. Thus, it is important that the franchisee is aware of the penalties in case of non-compliance with contractual clauses. The new law requires the franchisor to inform in detail each situation considered as non-compliance with the agreement, the penalty to be applied, and also the value of any fines and/or indemnities.

3) Indication of the existence of a franchisee advisory council or franchisee association.

It is through these two systems that are discussed: promotional and advertising campaigns; third-party employment, such as digital influencers hiring to promote the brand and/or products and services provided by the system; discounts or benefits offered to customers; new products and new services for the network, among others.

4) According to the new legislation, the COF shall also inform:

(i) if the franchisor establishes minimum purchase quotas by the franchisee, in addition to the occurrence of the possibility of products or services refusal;

(ii) if there are rules limiting competition between the franchisees or between the company-owned units and what are the penalties in case of these rules breach; and

(iii) specification of the contractual term and conditions for renewal.

Article 3 brings another novelty, the possibility for the franchisor, interested in maintaining a certain business location, to sublet it to a franchisee. Regarding this, the fact that the franchisor may even charge a higher amount than what it will pay to the property owner is innovative, as long as it does not imply an excessive burden on the franchisee. However, in order for this sublease to be valid, it shall be expressed and clear both in the COF and in the franchise agreement.

Another novelty is the notes brought by article 7, which clarifies points about international franchise agreements. Considering a large number of international franchises in the country, the topic is quite relevant. According to ABF, in 2020 we had 205 foreign brands from 30 different countries. The beauty and fashion sectors stand out, occupying, respectively, the 2nd and 3rd place with 35 and 28 brands each.

The new law determines that international agreements shall be written in Portuguese or translated into Portuguese, which translations shall be paid for by the franchisor. The parties may choose the jurisdiction of one of their countries of domicile. However, the parties shall constitute and maintain a legal representative or attorney domiciled in the country of the defined jurisdiction, with powers to represent them administratively and judicially.

Certainly, the new legal landmark did not exhaust all aspects of the sector. The new law remains simple in itself, with only ten articles. As mentioned, franchising is a complex model with many particularities and details and it is considered one of the most complex business agreements due to the fact that it covers several legal relationships. Therefore, it would certainly fit more explanation and detail in the law. For this reason, some scholars and experts understand that franchise is an atypical business.

However, it can be said that the changes were positive. The new legislation brought greater security to the parties, especially in sensitive points, such as the absence of an employment relationship and the non-application of the CDC, as it requires the COF to bring more information about the business, enabling the alleged interested one to decide more clearly: (i) about the advantages and disadvantages of the business; (ii) whether that system fits your profile; and (iii) whether it is the type of business he wants to join since the franchisee shall follow rigorously the business format.

A word that translates the new legal landmark of franchising is transparency. This transparency certainly attracts more investors and entrepreneurs to this business model, boosting the national economy by generating jobs and income and contributing a significant portion of GDP.