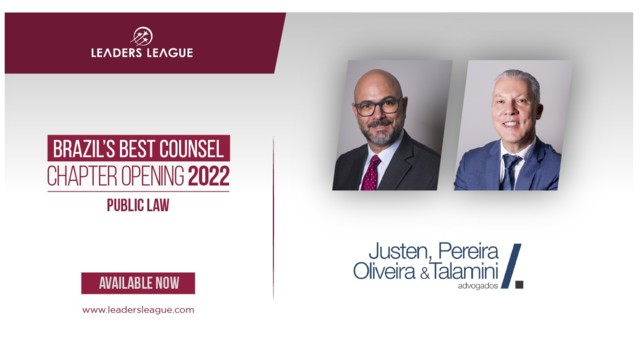 In 2021, Brazil enacted new public procurement legislation that may prompt a true revolution in transparency, data management and efficiency in public tender procedures and contract administration.

Brazil also continued to advance its infrastructure agenda through legislation and regulations to enable successful projects is areas such as ports, sanitation, renewable energy, airports and railways.

The widespread use of ADR (alternative dispute resolution) mechanisms in government contracts grants further safety to international and domestic investments.

Congress passed the bill for new public procurement legislation in December 2020, after long discussions in both Houses. The bill became Law 14.133 in April 2021. For detailed commentary on Law 14.133, cf. JUSTEN FILHO, Marçal. Comentários à Lei de Licitações e Contratações Públicas. Thomson Reuters. 2021. The book follows the success of its author’s commentary on the pre-existing legislation, with 18 editions between 1993 and 2019. More immediate information is available online on justenfilho.com.br.

In May 2020, Brazil applied to join the Agreement on Government Procurement (GPA/WTO), and in October 2020 it submitted its first documentation to carry out the accession. At the same time, Brazil took initiatives to join OECD. The new public procurement legislation is not directly related to such initiatives, but it benefits from international experience by adopting competitive dialogue, regulated in EU law and widely used in the United States, life-cycle cost analysis and other international best practices in the field of government purchases.

Among the various infrastructure areas on the rise, the ones in the spotlight are sanitation and railways

Law 14.133 is influenced by Brazil’s recent experiences in public procurement. It follows the successful use of electronic reverse auctions, framework agreements and the flexible procedures set out by RDC, the differential procurement regime originally created for the 2014 FIFA World Cup and the 2016 Olympics. The new legislation relies heavily on technology by creating a national public procurement portal (PNCP, in the Portuguese acronym) that promises to enable open contracting, greater transparency and eventually the use of e-marketplaces or other innovative procurement mechanisms by national or sub-national procuring entities.

Law 14.133 adopts the pragmatic premise that its effective implementation requires training, professionalization, and specialization of government personnel. It imposes a separation of attributions, so different roles in public procurement must be allocated to distinct government officials.

Unlike past legislations, which tended to govern public procurement completely, Law 14.133 leaves much for administrative regulations to complement. This scheme may enhance its adaptability to changing circumstances, which is a sensible arrangement especially due to the speed of current technological developments.

Although Law 14.133 does not abandon the concept of state prerogatives in government contracts, it enables greater contractual clarity and foreseeability by requiring provisions for risk allocation and even an express risk matrix in larger or more complex contracts. This is one of several instances in which Law 14.133 benefits from contractual arrangements developed within the successful government concessions and PPP programs started in the 1990s. Law 14.133 tends to reduce government discretion in contract administration through binding contractual risk allocation.

The new legislation borrows from corporate governance the concept of three lines of defense and gives various types of officials separate roles in oversight duties. Such lines of defense comprise procurement officers, the procuring entity’s in-house counsel and specialized accountability offices such as the constitutionally mandated federal and local courts of audit.

Law 14.133 improves the pre-existing systems of sanctions for contractual breaches or misconduct by setting out more clearly a correspondence between infractions and respective sanctions and defining expressly the scope of different sanctions. It departs from the internationally most advanced notions of debarment as prevention of future harm rather than mere punishment for past misconduct.

The law provides for disqualification (impedimento) due to serious contractual breaches and debarment (inidoneidade) for misconduct such as fraud, submission of false documents or corruption. Disqualification prevents bidding and contracting with any procuring entity in the same level of government for up to 3 years, and debarment extends to all levels of government and has a duration of 3 to 6 years. This is a steep increase in the duration of punishment, in a move that clearly stems from Brazil’s recent history with corrupt practices in government procurement.

In a welcome change for pre-existing legislation, Law 14.133 considered criminal offenses related to public procurement, such as bid-rigging, as part of the Penal Code. This conceptual change overcomes any possible doubt about the application of general criminal law principles to such offenses.

In the wake of laws enacted since 2015 for ample use of arbitration, mediation and negotiated settlement in government disputes, Law 14.133 has a specific chapter for dispute resolution, including dispute boards. This is another example of public procurement under the new law having benefitted from the experience in concessions and PPPs, which generally provide for ADR. It is expected that ADR procedures will be adopted more often in public works and other types of government contracts.

Among the various infrastructure areas on the rise, the ones in the spotlight are sanitation and railways

After decades of regulatory uncertainty, in June 2020, Law 14.026 created the new water and sewerage legal framework in Brazil. The new framework favors regionalization and uniformity of regulation by assigning regulatory functions to a federal agency, and it has been heralded as the gateway for new private investments in an area in which Brazil has a large deficit to overcome. Among other large tenders that have taken place in Brazil since 2020, the state-owned Rio de Janeiro water and sewerage company (CEDAE) was privatized in 2021 under the new legal framework.

A new legal framework for railways is under discussion in Congress and is due to be enacted soon to provide exploitation of railway services under less regulated arrangements than government concessions. Railway companies have shown their interest in the new schemes by applying to develop new projects at federal or state levels.

The new public procurement act is the most important innovation in Brazilian public law in 2021 and may usher in a welcome revolution in government practice. Private investment in infrastructure is also crucial as an engine for recovery from the Covid-19 pandemic and for future economic growth. Legislative and regulatory public law developments provide the necessary framework for enhanced international or domestic investments and business opportunities in the coming years.

Marçal Justen Filho is the founder and senior partner at Justen, Pereira, Oliveira & Talamini who practices as counsel, arbitrator and consultant. LL.B (1977), UFPR; LL.M (1984) and Ph.D (1985), PUC-SP. He has held the following academic positions: Head Professor of the Public Department of the UFPR Law School (1986-2006). Visiting Researcher, Yale (2010/2011) and at the European University lnstitute in Florence (1999). He has expertise in many areas affected by public law especially in infrastructure, public procurement, civil construction, competition law and regulated markets.

Cesar Pereira FCIArb is head of the firm’s infrastructure practice and of its arbitration practice, in addition to being Chair of CIArb Brazil. His practice as counsel, arbitrator and legal expert focuses on infrastructure projects, regulated industries and public procurement. He holds a doctorate in public law from PUC-SP and has been a visiting scholar at Columbia University and the University of Nottingham. He is a board member of Public Procurement Law Review – PPLR.