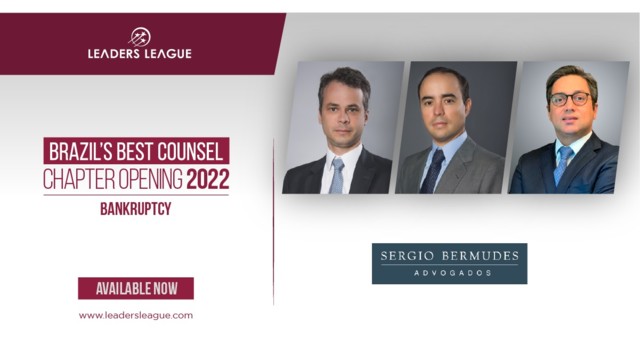 2021 was a quite a year for bankruptcy and reorganization law in Brazil. In addition to the ramifications of the global pandemic, practitioners and the judiciary were required to adapt to significant changes brought by the new Bankruptcy Law (Law n. 14.112/20) which came into force on January 24, 2021.

The new Law aims to enhance the viability of successful negotiations between creditors and debtors. It enhances creditor rights in reorganization proceedings – in particular it confers certain rights to creditors to put forward a reorganization plan of their own for the distressed company, in certain circumstances.  We briefly examine some of the key new provisions below.

Article 39, paragraph 4 of the new law permits replacement of a creditors meeting can now be replaced, with identical effects, by: (i) a consent form signed by as many creditors as are needed to satisfy the specific approval quorum; (ii) online deliberations and electronic voting by means of a system that reproduces the voting conditions of the general meeting; or (iii) any other mechanism that the presiding judge considers to be sufficiently reliable. This flexibility was almost certainly a response to the COVID-19 pandemic, but is a very positive development, in particular for creditors for whom physical attendance at creditor meetings is difficult or excessively time consuming for logistical or practical reasons. The use of electronic systems enables broader participation by all creditors, facilitating full engagement of interested parties in the reorganization process.

The possibility of creditors filing a reorganization plan of their own is a welcome innovation. Article 56, paragraph 4 of Law n. 14.112/20 enables creditors to put forward their own suggested terms if the proposal put forward by the debtors is rejected and the cram down criteria are not met. Creditors are also entitled to put forward a plan in circumstances in which an extended stay period expires without there having been deliberation on the debtors’ plan (article 6, paragraph 4 and paragraph 4-A). It remains to be seen how this will work in practice and even at this early stage we can foresee certain practical difficulties with this, but the new provisions would appear to grant creditors significantly greater leverage when negotiating the terms of a reorganization plan.

New statutory provisions in Law n. 14.112/20 bring the Brazilian statutory framework into line with international practice by setting out clear rules on issues such as Debtor-in-Possession (DIP) Financing, Substantive Consolidation and Abusive Voting. These issues arise relatively frequently in proceedings before Brazilian courts, but there has been some inconsistency in the approach taken to them by different court centers.  The expectation is that the new statutory provisions will provide courts with clearer guidance and promote uniformity in decision-making and therefore greater legal security for both debtors and creditors.

DIP Financing, in particular, is already a widely accepted practice in Brazilian proceedings, but the lack of clear statutory regulation has discouraged several potential DIP investors from injecting funds into distressed companies that are undergoing reorganization. Article 69-B of the law now means that ‘new money’ (i.e. resources made available to the distressed company following the commencement of the reorganization proceedings) will have priority over all pre-petition claims and almost all post-petition claims.  Easier access to DIP Financing may significantly enhance the likelihood of a successful long-term outcome to reorganization proceedings.

Substantive Consolidation – i.e. the joinder, in multi-party insolvency proceedings, of all the assets and obligations of the various debtors (e.g. all the members of a group of companies) so that all these assets can be used in the satisfaction of the creditor’s claims - was also already being applied by judges to restructuring cases in Brazil. However, the absence of legislative provision gave rise to considerable uncertainty as to the criteria to be relied upon in directing consolidation and effects of the measure on all interested parties. The new law establishes precise pre-requisites and the consequences for both the debtors and creditors.

With regard to Abusive Voting, the new Brazilian Law follows the lead taken by US Bankruptcy Law (in its provisions on Voter Designation) by establishing that a creditor’s vote will be considered abusive if it is exercised with a view to obtaining unlawful benefit to the creditor itself or to a third party.  Abusive votes held to have been cast in bad faith are to be set aside.

The new legislation incorporated the UNCITRAL Model Law on Cross-Border Insolvency into the Brazilian legal system, with minor alterations.  This is designed to enhance cooperation between Brazilian courts and their foreign counterparts in cases that involve cross-border issues.  Articles 167-A to 167-Y of the Law formally introduce transnational insolvency proceedings into Brazilian procedural practice. Brazilian courts are now entitled to formally recognize the existence of foreign proceedings (which may be classified as the main or secondary proceedings, for the purposes of Brazilian law, with regard to a given insolvency issue). The new law sets out mechanisms for close judicial cooperation with foreign courts, parties and officials and for the coordination of concurrent transnational reorganization proceedings.

Other noteworthy provisions are: (i) any extension of the 180 days stay period, during which claims cannot be filed against the debtor, is limited to one additional period of 180 days.  Following  the expiry of the 180 day extension, the creditors may put forward their own alternative reorganization plan if the debtors’ plan has not been the subject to deliberation; (ii)  the transfer of a company as going-concern transfers (which may be effected via a debt into equity swaps) is now included as a restructuring option; and (iii) farming entities (rural agricultural producers), a significant economic sector in Brazil, are now entitled to apply for  judicial reorganization (Article 48, §§ 2º e 3º).

The new legal framework is still at the early stages of implementation.  In general, the developments are positive and have been welcomed by practitioners.  In particular, the alignment of Brazilian rules with international bankruptcy practice is expected to significantly increase cooperation in transnational insolvency proceedings and to foster a more secure environment that may encourage the inflow of investment to companies that are undergoing restructuring.

Specialized in corporate restructuring and bankruptcy issues, Marcelo Carpenter has an extensive track record advising on groundbreaking restructuring cases since the 90s. Mr. Carpenter heads the firm’s insolvency practice area and frequently represents national and international debtors, creditors, investors, and financial institutions in complex restructurings, in and out-of-court corporate reorganizations, and bankruptcy proceedings. He is a member of TMA, INSOL International, CBMA, and the International Association of Young Arbitrators.

Eric Pestre has extensive experience providing counsel on litigation, arbitration, bankruptcy, restructuring, and insurance law. He routinely assists debtors, creditors, and investors in bankruptcies, especially infrastructure, maritime and retail companies, and previously served as in-house counsel to an airline company in one of Brazil’s first judicial reorganizations cases. Mr. Pestre is a member of the restructuring committees of OAB/RJ and IASP, and a member of TMA, INSOL International, and IBR.

Ricardo Loretti specializes in corporate reorganizations and dispute resolution. He is often active on behalf of several national and international clients in complex insolvencies before Brazilian courts. Mr. Loretti is the Arbitration Vice-President of CBMA and sits on the arbitration committee of the Federal Bar Association and the Council of OAB/RJ Bar Association. He holds an LL.M. from the Sorbonne and a postgraduate degrees from Harvard Law, the ICC, and the British Chamber of Commerce, in addition to being a member of TMA.