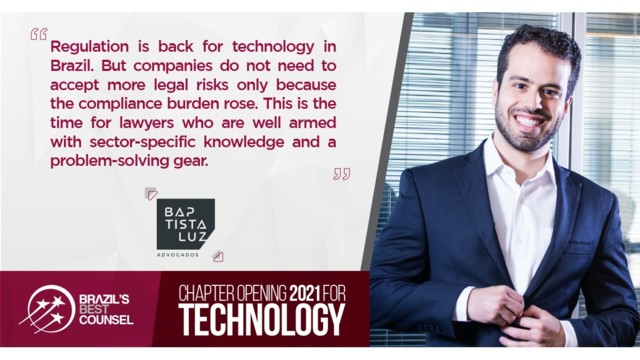 As entrepreneurs and large companies innovate and develop new technologies, regulation also evolves, but always remains a few steps behind. At the beginning of the 2000s, this delay was so significant that we had a long period of legal uncertainty in the digital industry, particularly with regards to themes such as intermediary liability, copyright infringements, and network neutrality. With court precedents playing a major role and federal agencies working as its stunts, navigating through all these different legal references and analogies was not easy.

With the approval of the Brazilian Civil Rights Framework for the Internet (Marco Civil da Internet) in 2014, Brazil experienced a new era for those who have been working with technology transactions. The zenith was a regulation designed to increase legal certainty and acknowledge that digital businesses need to be plural and diverse, as well as rely on an open environment where freedom of business models would also be a core principle. The stakes were high, as Marco Civil would expectedly define the directions for future regulations.

The dream of this technology-neutral regulation and multistakeholder governance eroded in the last years. Furthermore, the illusion of a less-regulated sector faded away, as Brazilian legislators have imposed significant new burdens on digital businesses.

Such a trend was anticipated. The enthusiastic years of the internet as a social development tool were suddenly (and to some extent unfairly) forgotten as the “techlash” emerged, with critiques to the platform economy, data businesses, financial technologies, and mobility solutions. Most of these concerns were reasonable and significant. Others were part of grander movements with a subtle, disruptive geoeconomic agenda, such as the GDPR. Finally, some were reactionary, opportunistic, and (not surprisingly) connected with electoral objectives.

This is the real trend for Brazil right now. In 2018, we pushed for the approval of LGPD (General Data Protection Law), our “Brazilian GDPR”, a somewhat tropicalized version of its European sibling, enthusiastically promoted by several stakeholders but lacking a critical understanding of its regulatory costs and unintended consequences. In the same year, CVM (Brazilian Security and Exchange Commission) and the Brazilian Central Bank started to regulate several actors from the fintech and cryptocurrency landscapes. Regulations for e-hailing services popped out from everywhere on a national and municipal level, creating even more challenges for new entrants. Finally, the pandemic has also spurred sectorial and self-regulation initiatives in education and health services, mostly focused on addressing public welfare to a remote and ubiquitous reality.

While many of these initiatives are consistent and necessary to balance market freedom with inarguably higher social and economic objectives, it is worth noticing that many of them were ignited by the “techlash” romanticism mentioned earlier and sparked controversial initiatives. Yes, the absurd proposition to ban TikTok in the United States and the even more absurd fake news agenda in Brazil have the same heritage.

Collectively, all of these initiatives will not be momentaneous. Sectors such as the insurance and automotive industries will likely see new specific regulations soon which will impact its technology vendors. Compliance departments will be more and more involved with legal teams, developing processes and controls to meet sector-specific regulations. Artificial Intelligence and IoT will not only be trendy issues but regulation targets. And C-Level executives must acknowledge that regulatory frameworks will no longer be mere backstage work, but strategic agendas for the future.

The great news is that good, solid regulation often means more legal certainty. More regulation can also spur freer markets, provided that these guidelines can fairly set the rules of the game. Lawyers equipped with up-front knowledge of this scenario can help circumvent inadvertent, onerous regulatory impacts, and prevent stakeholders’ decisions that could lead to regulatory balkanization, isolating business models from the global digital economy.

Whatever you may think about the “dilemma” that everyone is talking about, the internet is the piston for social development in the 21st century. Surely, the Digital Era has also brought many unintended consequences, as everything since the Big-Bang has its good and its bad sides. Therefore, let us embrace good regulation, criticize bad rules, and stay away from ugly demagogy. As instruments for applying the law, we lawyers must be part of this debate, helping companies to be more efficient, and play a greater social role in developing a new economy in the country.

Pedro H. Ramos is a partner at Baptista Luz Advogados. Mr. Ramos graduated from Universidade de São Paulo (USP), holds a Master’s of Laws from Fundação Getulio Vargas (FGV) and is a former Stanford Law School researcher. He has been representing clients from the technology sector since 2009, while maintaining his acknowledged work in the academic and public policy spheres. He has been recognized by publications such as Leaders League, Global Data Review and Data Guidance, for his leadership on media, tech transactions and data protection. He is an advisor to the Interministerial Committee for Digital Transformation, a board member at ABStartups (Brazilian Startups Association) and the co-author of “Regulatory Environment: Public Policy Best Practices to Support Startups” alongside Felipe Matos.