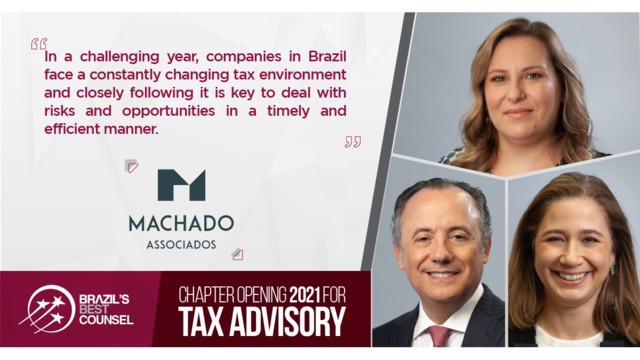 In a challenging year marked by Covid-19, which significantly impacted the worldwide economy and businesses, the tax environment was also affected and required that companies dedicate special care to navigating it, mainly in light of decreased income and cash flow shortage. Brazil is no exception and specific rules have been issued to postpone the payment of taxes and the filing of tax returns.

However, tax changes and debates in Brazil in 2020 have not been limited to issues connected to the impacts of Covid-19. Important matters call the attention of companies to face risks and opportunities in a timely and efficient manner.

In this context, the House of Representatives and the Senate decided, by the end of 2019, to form a joint commission to produce a single proposal to amend the Brazilian Constitution based on the existing proposals (PEC 45 at the House of Representatives and PEC 110 at the Senate). Both existing proposals reduce the number of indirect taxes combining them into a single tax on goods and services (“IBS”) to simplify the tax system, replacing the state value-added tax – ICMS, the federal excise tax – IPI, the municipal tax on services – ISS and the social contributions on revenues and imports of goods and services – PIS and COFINS.

Covid-19 delayed the activities of such commission, however, even in the uncertain pandemic scenario, discussions evolved, and the Executive branch has finally taken its first step towards a tax reform by presenting Bill 3887 in July 2020. Such bill only replaces PIS and COFINS with a single contribution on goods and services (“CBS”), with a broader scope, a single tax rate and without most tax regimes and benefits, raising several discussions on a potential increase in tax burden.

Although there are no other formal proposals yet, it is rumored that Executive branch’s tax reform plans include imposing withholding income tax on dividends and tax on digital transactions, as well as reducing taxation levied on payroll. Apparently, the Executive branch tax reform will focus on federal taxes and in changing laws, without requiring amendments to the Constitution. Procedures to approve laws are simpler and require a smaller quorum in the National Congress when compared to the process and quorum to amend the Constitution.

It is unclear yet how the tax reform will evolve and when actual changes will be implemented, however, in this turbulent year, Brazil has moved forward towards a tax reform.

Additionally, some other developments should be highlighted. Unlike other countries, Brazilian tax authorities traditionally were not entitled to perform any transaction with taxpayers to settle tax debts. In 2020, Law 13.988/2020 finally set out rules to allow federal tax authorities to conclude negotiations with taxpayers which may result in payment of taxes in installments and in discounts on interest and penalties. In return, taxpayers must comply with certain obligations, such as keeping a regular fiscal status. Although still incipient, tax negotiation has been allowed for certain debts with the Brazilian Revenue Service (“RFB”) and under tax foreclosure before the National Treasury Attorney General’s Office (“PGFN”). Certain States (such as São Paulo) also issued rules to allow for the tax negotiations. It is expected that this trend will reach other States and municipalities.

Moreover, Law 13.988/2020 extinguished the casting vote within the Administrative Court of Tax Appeals (“CARF”). Previously, ties were settled by a casting vote of a judge representing the federal tax authorities, leading to a great number of unfavorable decisions to taxpayers. Hopefully, the case law in CARF will change for the future. Also, taxpayers could argue that cases decided by the casting vote should be revised. The constitutionality of this change is under discussion at the Supreme Court (STF).

Supplementary Law 175/2020 established that the ISS levied on services connected to health and medical assistance, fund management, consortium for the purchase of assets, credit and debit cards and leasing will be due to the municipality where the beneficiary of the service is located, instead of the municipality where the service providers are headquartered. This change increases the compliance costs as the service providers shall have to implement the necessary procedures to collect ISS in different municipalities, which may be very significant depending on the number of municipalities. The implementation of such change will not be immediate, and it may eventually be challenged before the STF.

Finally, discussions between the RFB and the Organization for Economic Co-operation and Development (“OECD”) on the convergence of Brazil to OECD transfer pricing guidelines have continued, and taxpayers and other interested parties have been invited by RFB and OECD to take part in a survey on the potential safe harbor rules that could be useful in such convergence. This matter is moving on although it is still unclear when and how Brazil will converge to the OECD standards.

The restrictions derived by Covid-19 have significantly changed the mechanics of judgements considering that the judges started working remotely and taxpayers were unable to present their claims, arguments and other requirements in person. Although proceedings in the last years are already digital, court sessions always took place in courthouses and processing continued to flow in a traditional matter, sometimes taking years to be finally decided by the STF. Surprisingly, in this unprecedented scenario of virtual sessions held as of April 2020, some longstanding tax cases have been decided by STF. Unfortunately, the STF caught taxpayers by surprise by deciding several cases against them and also revising previous case law favorable to taxpayers.

This is the case of Extraordinary Appeal No. 1.090.591 in which STF concluded that tax authorities could refuse the customs clearance of imported goods while additional tax amounts charged are not paid. Therefore, taxpayers must first pay such additional taxes imposed by tax authorities to later challenge it.

Extraordinary Appeal 1.072.485 is another example of an unexpected and revised position. In this case, the STF concluded that social security contributions apply to the mandatory 1/3 vacation bonus, overturning case law of the Superior Court of Justice (“STJ”). Said decision has a significative impact to Brazilian companies which, in view of the consolidated position of STJ, have not collected social security contributions on such bonus and, now, may be subject to a tax assessment to claim unpaid amounts from the last five years.

These examples show that STF has been very active lately and has mostly taken positions against taxpayers, which may be an adverse consequence of the lack of debates during virtual court sessions.

In summary, the tax legislation and case law scenario show that 2020 has been an active year and new developments are expected in the near future. It is clear for both the Executive and Legislative branches that a tax reform is needed, and, although it is not possible to foresee changes right now, measures for the simplification of the tax system should be introduced, but not a tax reduction, in view of the relevant Covid-19 expenses incurred by the government. Furthermore, STF gave signs that more tax decisions may be issued in the coming months. This is a scenario in which companies are required to be up to date in order to make the best decisions at the right time.

Maria Andréia F. S. dos Santos is a partner in the tax litigation area, with experience in the administrative and judicial levels, in matters involving the Federal, State and Municipal Authorities, defending individuals and legal entitites that are charged by taxing agencies or seeking the Judiciary to cancel the undue collection of taxes.

As a partner, Júlio de Oliveira has worked on major direct and indirect tax proceedings and provided strategic consultancy to large domestic and international companies. He is a member of committees and associations seeking to improve the Brazilian tax system and was previously a judge of the Administrative Tax Court of the State of São Paulo.

Ana Lucia Marra is a partner with 22 years of experience in tax consulting, acting on project and team management to assist multinational companies in Brazil and abroad in various sectors. She specializes in tax consultancy in the field of direct taxes and international taxation for Brazilian and foreign companies, working in the assessment of tax impacts of transactions and corporate structures and in identifying alternatives for tax burden optimization and tax risk mitigation.