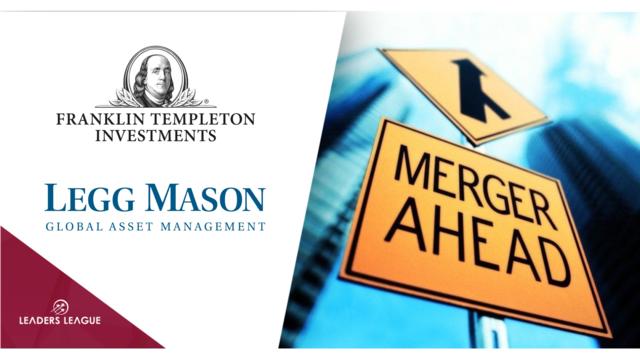 In a deal that will expand its assets under management to $1.5trn, Franklin Templeton has announced its acquisition of fellow asset manager Legg Mason for $4.5 billion, plus $2 billion of debt.

The merged company will be led by Franklin Templeton’s current CEO Jenny Johnson. Though Johnson claims that the move is about “offence, not defence”, the fact remains that this is another mid-size asset manager merger at a time when competition from passive funds has never been tougher. Both Franklin Templeton and Legg Mason, like many other asset managers, experienced negative investment flow from their funds in 2019.

Franklin Templeton is based in San Mateo, California; Legg Mason is headquartered in Baltimore, a little closer to activist shareholder Trian Partners, which holds a 4.5% stake in the company. Nelson Peltz, who founded Trian Partners and sits on Legg Mason’s board, was in favour of the buy-out, saying it would help Legg Mason “remain at the forefront of an industry where scale is increasingly vital to success”.

Unlike many of the most recent high-profile asset managers mergers, such as Janus Henderson and Standard Life Aberdeen, which were funded through shares, the Franklin Mason tie-up is an all-cash transaction. Franklin Templeton, which currently has $698 billion AUM in comparison with Legg Mason’s $803 billion, will gain exposure to new asset classes such as real estate, infrastructure and multi-asset solutions, as well as balancing its investment platform between institutional and retail client AUM.