According to investment bank GCA Altium’s newly released MidCapMonitor report, in 2017 the German mid-cap LBO market crossed the 100 transactions threshold for the first time ever. Sixty-eight of the transactions were financed by banks and 32 by debt funds. 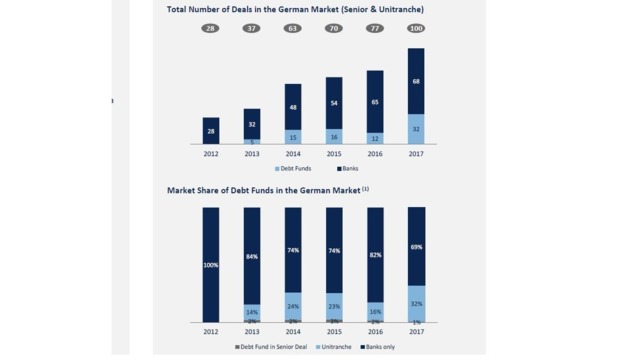 The German mid-cap LBO market experienced another year of significant growth in 2017, with a rise of 30% in numbers to reach 100 transactions, the latest MidCapMonitor Report by GCA Altium revealed.

Growth was in particular driven by debt funds, which generated 32 transactions, an increase of 166% compared to 2016’s 12. Although the final tally is not yet in, bank-funded deals only slightly increased from 65 to 68 (5%).

As a result, the market share of debt funds providing unitranches and participating in senior debt financings of mid-cap LBOs in Germany nearly doubled over one year to reach 33%, an all-time high, reaching a similar level to the UK, the number one debt-fund market.

Thirteen out of 32 transactions, or more than 40%, were financed by debt funds, set up as first-out /second-out structures, using cheaper bank debt to lower the average margin of the unitranche. Johannes Schmittat, managing director of the Frankfurt office of GCA Altium, commented that the use of this structure was one of the key drivers of the increased market share of debt funds in Germany.

Among banks, SEB defended the 12-month market-leadership position it achieved in 2016 by completing 23 transactions. But it had to share this position with Unicredit, the most active bank in the market during Q4 2017. Other banks to finance more than 10 LBO transactions each were: IKB (19), Commerzbank (17), NIBC (14), DZ Bank (11) and ING (11). “Despite this impressive performance, we think banks will have a very hard time in the future when they try to regain market share lost to debt funds,” Norbert Schmitz, another managing director at GCA Altium, said.

In general, the most active sponsors in the German LBO market in 2017 were Capvis (6

Investment Partners and Waterland (4 deals each).