It’s the largest deal of the year so far, and the largest in the history of the semiconductor sector, but it’s not out of the woods yet. 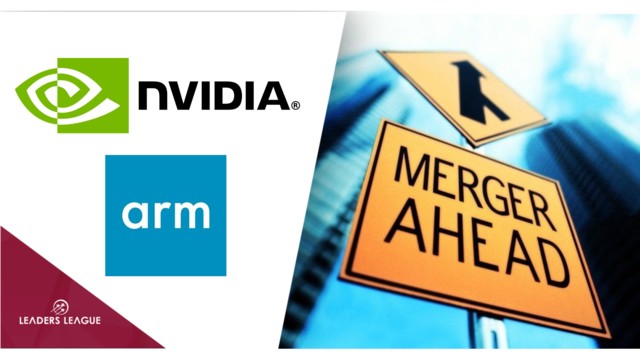 In a major acquisition many pundits (including us, here) have seen coming, US chipmaker Nvidia has bought British semiconductor powerhouse Arm from SoftBank for $40 billion.

2020’s largest acquisition by dollar-value so far, the deal is highly significant for strategic reasons: it would give Nvidia control over a company that powers much of the technology crucial to all of our lives. Smartphones from Apple to Samsung rely on chips based on Arm’s central processing unit (CPU) architecture, as do all manner of laptops, tablets and smart TVs. It has already begun playing a vital role in the nascent Internet of Things. (PCs don’t yet use Arm-based chips, but it’s likely only a matter of time.) In a relatively short period of time, Arm-based chips have outperformed longstanding industry leader Intel’s in efficiency and size, making the company one of the crown jewels of Britain’s tech industry.

Japanese fund SoftBank seized upon this in 2016, when, thanks to Brexit, the pound was plunging and inbound acquisitions of British companies were relatively cheap. It bought Arm for $32 billion, and is selling the Cambridge-based firm for $8 billion more than that, giving the fund a much-needed windfall after its high-profile, high-cost misadventure with WeWork and the steadfast loss-leadership of Uber.

The UK’s Competition and Markets Authority (CMA) has yet to clear Nvidia’s takeover of Arm, though, and given how significant Arm is to the UK’s strategic status as a tech leader, there is much vocal opposition to the deal. But for all its Union Jack-waving, the Conservative government has a storied history of relinquishing national assets at firesale prices, and Arm is no exception. Opponents of the deal can do little but seek assurances: member of Parliament and former opposition leader Ed Miliband today called on the government to “urgently clarify” whether it had secured a written promise from Nvidia to keep Arm headquartered in the UK.

“If the government has failed to extract those legally binding assurances,” said Miliband, “it will be a real dereliction of duty that calls into question its commitment to an effective industrial strategy.”

Arm co-founder Hermann Hauser called the deal “an absolute disaster” and warned that it would destroy the company’s business model and entail job losses in the UK, pointing to Kraft’s takeover of Cadbury in 2010 as a precedent. However, it is unlikely the government will block the deal. If it did, it would likely be on national security grounds, given Arm’s usefulness to the defence sector; but according to Magic Circle law firm Linklaters, no deal has ever been blocked on these grounds by the UK government.

The deal raises questions for America, too – namely whether Chinese regulators will even approve the deal, and the extent to which the US will allow Arm to license its CPU architecture to Chinese tech manufacturers. In 2016, just before it was acquired by SoftBank, Arm disclosed in public filings that 20% of its revenue came from China. If it blocks Chinese manufacturers from using its protocols, China will have to develop its own CPU architecture. Steward Randall, who tracks China’s chipmaking sector at Shanghai-based consultancy Intralink, said that Chinese regulators were unlikely to green-light the deal “unless they get something big in return”. The superpower has been pumping tens of billions of dollars into its semiconductor industry, hoping to make it world-leading.

The clear beneficiary of the deal, of course, is Nvidia, a company we analysed at length a few weeks ago in this article. It is paying $12 billion in cash on top of $21.5 billion in shares, and an extra $5 billion in cash if Arm meets certain performance targets. Nvidia’s CEO Jensen Huang said the takeover would create “the premier computing company for the age of artificial intelligence”. The tech giant could use Arm’s protocols – soon, perhaps, to be its own proprietary protocols – to make its own CPUs, giving it an enormous amount of power in a sector it already dominates: data centres. Currently, most of Nvidia’s rivals use Arm protocols in their technology.

“A sale to Nvidia will mean that Arm becomes subject to the CFIUS regulations,” wrote Hauser in an open letter to British prime minister Boris Johnson. “This puts Britain in the invidious position that the decision about who Arm is allowed to sell to will be made in the White House and not in Downing Street.”

“An acquisition by Nvidia would be detrimental to Arm and its ecosystem,” said Geoff Blaber, vice president of research for the Americas at tech market consultancy CCS Insight. “Independence is critical to the ongoing success of Arm and once that is compromised, its value will start to erode.”

Huang has downplayed fears. “Of course we are going to keep it open and fair,” he says, “because we care so much about the business model.”