Despite an under-resourced court system in Spain, efforts to promote the wider use of arbitration domestically have been unsuccessful, according to leading dispute resolution lawyers speaking at the Leaders League Thought Leaders Roundtable in Madrid 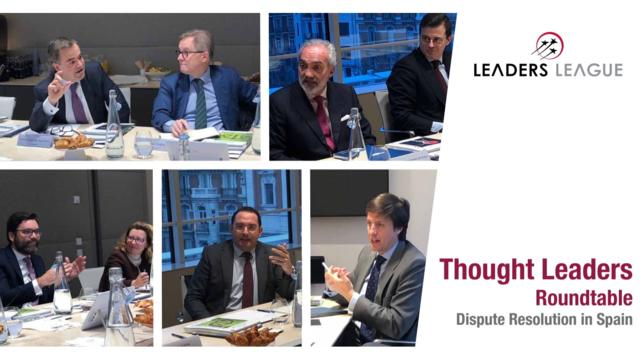 Spanish courts often lack sufficient resources to handle highly complex disputes, while judges are frequently not provided with enough support to do their job effectively, said participants in the recent Leaders League Thought Leaders Litigation Roundtable in Madrid – hosted by Allen & Overy – which focused on the latest trends in dispute resolution. Yet, despite this, lawyers and ADR practitioners have largely failed in their efforts to convince clients of the benefits of arbitration, for example. How could the court system be improved? Increasing pay for judges has been put forward as one possible way of helping to tackle the problem, though there are doubts that there is sufficient political will in Spain to provide more funding for the justice system. Meanwhile, there are high hopes for the new Madrid international arbitration centre, and there is widespread belief that the increased use of third party funding in Spain will prove to be a “game-changer” that will generate substantial new markets for the nation's law firms. However, there are major concerns that third party funding could lead to question about arbitrators’ independence.

In Spain, there are three major challenges with regard to dispute resolution, according to Allen & Overy partner Antonio Vázquez-Guillen. “Firstly, there is unpredictability in the decisions of the courts of justice, the decisions are often random and are dependent on the judge,” he said. Secondly, according to Vázquez-Guillen, there is uncertainty about the duration of proceedings and, when clients ask for a risk analysis, there is a lack of clarity about how long first instance will last, for example, though this is more predictable in the case of employment disputes. Finally, another key challenge is the procedural requirement that a statement of defence should be made available in 20 working days, despite the fact that the claimant may have had months to prepare their case.

Vázquez-Guillen added that there is a “huge gap in sophistication” between the way the Spanish courts operate and the way international clients do business, and there could be a number of reasons for this, “perhaps related to mindset or the relatively low salaries that are paid in the Spanish judicial system”. Vázquez-Guillen acknowledged that this also raises questions about why this gap has not been plugged by ADR [alternative dispute resolution]. “While international clients may make use of arbitration clauses, there is not sufficient confidence in ADR in Spain,” he said.

Meanwhile, third party funding will foster more complex disputes, according to Vázquez-Guillen. “With more players funding disputes, this will be a game-changer.” He added that, overall, Spain has a “trustworthy judicial system with top advisers and law firms to help clients navigate the system.”

Cuatrecasas partner Fedra Valencia said that, in Spain, anyone can make a court claim, whether simple or complex. “Everyone has the right to justice, though a lot of cases involve a lot of time,” she said. Valencia added that the problem with commercial courts in Spain is that sometimes they do not have adequate resources. She also said that, while mediation is an alternative option, sometimes the mediators do not have adequate professional training and consequently do not know how to do the job properly. Valencia also said there are issues with the management of courts in relation to the setting of salaries and vacation times for court staff, for example. However, she added that, in general, the Spanish court system is “not so different from the rest of continental Europe.”

Spain has a good system for “average matters” but it struggles when it comes to highly complex disputes as the courts have a heavy caseload, said Uría Menéndez partner Álvaro López de Argumedo. He argued that one solution could be a system whereby only those claims that “must be decided by judges go to court.” He added: “Cases could go to mediation first, with only really substantive claims going to court.” López de Argumedo also said that in some autonomous communities in Spain, the administration of justice is more efficient than in others. “In the Basque country, for example, justice works very well,” he said.

Meanwhile, López de Argumedo said that clients tend to prefer international, rather than domestic, arbitration as it is “perceived as more transparent, efficient and reliable”. He added that the new Madrid International Arbitration Centrer (Centro Internacional de Arbitraje de Madrid) is a key development. “Arbitration has grown amazingly,” he remarked.

When comparing court judgements with arbitral awards, generally speaking the predictability and quality of arbitral awards are better than court decisions, said Gómez-Acebo & Pombo partner Gonzalo Ardila Bermejo. “This is not a matter of lack of preparation or interest – judges don’t have enough means and sufficient time for cases, they have a work overload particularly with mass litigation related to the financial sector and antitrust.” He added that, while more courts and more specialist judges might improve the Spanish judicial system, “all this costs money and are politicians prepared to say [to the electorate] you have to pay for a better judicial system?” Ardila Bermejo also said that in Spain there is generally a lack of knowledge of arbitration and many potential users may have “doubts about the independence of local arbitrators”.

Meanwhile, third party funding will open a “whole new market” for law firms in Spain, according to Ardila Bermejo. “There are even third party funders that give money to firms to find litigation they want to invest in – meanwhile, insurance companies are insuring litigation.”

Lawyers and the ADR community have “not succeeded in their efforts to successfully promote domestic arbitration in Spain”, according to Herbert Smith Freehills partner David Arias. Another issue is that arbitration is not commonly taught at universities, added Arias. Therefore, when “an ordinary lawyer faces a specialist in arbitration, he does not feel comfortable – that is one of the reasons why he will always prefer to bring the claim before a court of justice,” he said. In addition, considering the costs involved, commercial arbitration is not always suitable for small claims, according to Arias. He added that the new Madrid International Arbitration Center solves a major problem for the arbitration community in Madrid in that it unites Spain’s three major arbitral centers, which were previously in competition. With regard to the issue of third-party funding, Arias said that transparency was vital and that the backing of third party funders “should always be disclosed in arbitration for transparency reasons and to prevent potential conflicts of interest”.

One of the major problems with the Spanish court system is that judges have to work alone without “sophisticated assistance”, according to Pérez-Llorca partner Fernando Bedoya. He also said that companies are happy to pay for mediation if they feel they are getting a better service. Bedoya added that arbitration is increasingly being taught in universities and that Spain has a sophisticated ADR community – “clients get a very good service at the ADR courts, but, in the court system, more help from judges is needed”.

Hogan Lovells partner Jose Luis Huerta highlighted the lack of specialism in the Spanish court system. “The court of appeal in Segovia, for example, hears criminal, civil and commercial cases,” he explained. Huerta added that third party funding could result in the impartiality of arbitrators being brought into question. “Third party funding could be risky in terms of arbitrators independence,” he argued.

When it comes to judges in Spain, albeit they have a good basic training and there is a highly competitive selection process, the quality is “patchy” as, while there are excellent and committed professionals, there are some others that are slow and have a lack of interest said Araoz & Rueda partner Alejandro Fernández de Araoz. He added that judges have little support from clerks and therefore “sophisticated judges are fighting against the system". A lack of funding is one of the key issues. “For the last 40 years, the budgets allocated to the Ministry of Justice have been poor.” One way in which the quality of judges could be improved would be by increasing the salaries on offer, Fernández de Araoz argued. He added that the investment needed to improve courts in Spain would not necessarily have to be huge: “It doesn’t take a fortune to change the judicial system.” He continued: “The system for justice in Spain is very dysfunctional, though, for example, the Basque courts are modern, quick, and have good judges.” Despite this, Fernández de Araoz said that Spain was, in general, able to offer a “sophisticated Bar at a reasonable cost”.