The reconciliation of work and personal life is being punished in the business world, and in law firms in particular, and this is restricting professional careers for women, says Ana Gómez, president of ASNALA, Spain’s Asociación Nacional de Laboralistas. 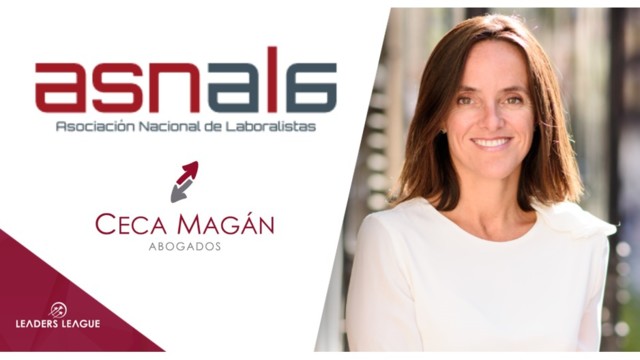 Interview with ANA GÓMEZ, president of ASNALA and partner at CECA MAGÁN ABOGADOS


How has ASNALA changed since you were appointed president in 2017?

Ana Gómez: The first change I introduced, was a change to the decision-making and management model of ASNALA. I formed a review board that was as diverse as possible and also representative of the partners of ASNALA, so that we are aware of the different sensitivities and needs of our partners. As a result of this decision, and the magnificent teamwork of the board, we have achieved these main goals:

- Association Management: We have substantially improved internal communication with our associates, providing them with technological tools that facilitate greater agility when it comes to relating to our members and knowing their needs. We have also professionalized departments such as administration and external communication.

- Digitalization: We are very aware of a change of era at a global level and labor structures and the relationship with workers is changing. There is a need to understand new areas of knowledge that were previously foreign to the legal sector, but are now intrinsically related. On the other hand, our clients require us to be highly specialized and able to rigorously face the challenges of the digital era, and these issues are addressed in practically all our training sessions.

- Reputation: We have substantially increased the visibility of ASNALA to society in general and to the government and media in particular. We are consolidating ASNALA as the labor association of reference in Spain and the one that different stakeholders or interest groups come to in order to debate and shape legislation.

We have also recently created the ASNALA Youth Club with the goal of promoting the careers of our youngest associates by providing them with the benefit of the experience of those of us who already have worked for many years in the profession. We have also begun to implement ASNALA’s internationalization plan – being a reference point for consultation and support for the different public authorities is one of our strategic objectives, and being considered such by the European and Latin American institutions is our most important challenge for the future. All these initiatives have helped us to increase our membership by 15 per cent.

Promoting specialization in the practice of labor law via collaboration agreements with universities and public and private study centers, professional associations and public administrations, as well as in the development of as many training activities and specialized publications as necessary.

Do you think the association should do more for women labor lawyers? What specifically can be done?

There is still a lack of awareness in society that equality between men and women is a fundamental right. Unfortunately, it is an evil yet to be eradicated in the legal sector. The reconciliation of work and personal life is being punished in the business world and in particular in law
firms, cutting off professional careers.

Similarly, two harmful effects of discrimination continue to persist; one is the glass ceiling, making the representation of female talent in organisations almost imperceptible, and the other is the gender pay gap.

Even so, I am optimistic, I believe that equality will come, that is why I constituted a board of directors that promotes being present in the most important debates on equality. We attend events in which women lawyers are recognized, and a great effort is being made to make female labor lawyers visible. This year, for example, our 16th Award for the Best
Labor Lawyer went to a woman and we have always included issues related to gender equality in our annual events and training sessions.


What values do you feel are especially important to promote as president of ASNALA?

Transparency, collaboration, effort, ethics, and commitment are our main values. We are also committed to meeting the needs of our associates, which involves providing them with the highest level of training so they can achieve excellence in their work and create a fairer society. I am firmly convinced that, by working with enthusiasm and effort, great goals can be achieved, but it is not possible to do so without bottom up collaboration between different interest groups in order to improve the social and legal environment on a daily basis.


Court delays have historically been an issue in Spain. Are such delays still a major problem? If so, why?

This is one of the biggest problems, although due to the past economic crisis, most of the courts were strengthened in order to reduce delays in their procedures. However much remains to be done, as while the changing trend is undeniable, the current lack of a negotiation culture
in the resolution of conflicts in Spain – and therefore the excessive judicialization of them, makes it necessary to encourage out-of-court settlements and thus avoid the saturation of the courts.


Why do you think it is that labor lawyers often have to make a greater effort to specialise than their counterparts in other practices?

We live in a world that is continuously changing. This clearly affects the labour field, particularly new labour platforms, equality policies, diversity, and new rights such as the right to digital disconnection or the incorporation of groups at risk of exclusion. In addition there are economic crises that detonate new labor problems, without forgetting teleworking or the new EU whistleblower directive. All this means that every day we have to assume the intellectual challenge of informing, training and specializing.