The managing partner of Íscar Arbitraje discusses the new Ibero-American arbitration center he is running, and how lawyers will have to adapt to the increasing sophistication of business. 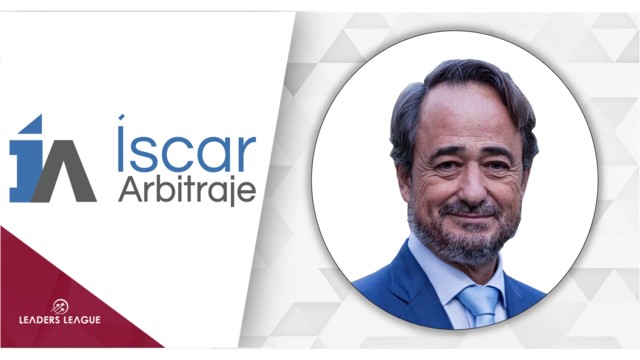 Leaders League: As the new president of CIAR (Ibero-American Arbitration Center), what are your plans for the Center?
Javier Íscar: The CIAR arbitration clause has been one of the most widely used clauses among businesses and Ibero-American lawyers, especially with SMEs [small to medium-sized enterprises]. Since the establishment of CIAR five years ago, the center has been going from strength to strength; the aim for the next five years is to keep on expanding. Currently we have more than 60 partners, but the aim is to have over 100 partners within the next two years, as well as a growing number of business organizations joining the already indisputable Ibero-American legal practice.

Furthermore, CIAR’s presence in the world of conferences, forums and seminars is essential if it is to be recognized as an internationally acclaimed institution. With this in mind, an Advisory Committee has already been created, with a maximum of five experts to represent each Ibero-American nation. A total of 105 CIAR ‘ambassadors’ will bring the CIAR philosophy and CIAR clauses to international trade relations, leading the way for arbitration in Ibero-American nations. This committee will be coordinated by three to five internationally acclaimed experts who will work with the Secretary-General and be assisted by the Vice-Secretary General, who is based in Costa Rica.

We will, of course, continue to change the arbitration regulations during the uncertain times we are experiencing, facilitating the work of arbitrators and associated parties so they can both develop and deliver arbitration in person and online.

We will also promote CIAR mediation with the regulation that meets the circumstances used to resolve the many conflicts that arise in Ibero-American relations. I firmly believe we should continue to commit to unifying both the legal profession and companies who produce good results together. There are two things that best characterize CIAR:

Successfully uniting the Ibero-American community through the consolidation of its arbitration centers to become one unit without gaps forming in the constitution. Uniting the bar associations and business representatives from 21 Ibero-American nations to work in harmony together on the same projects.

This has been made possible thanks to the welcome generosity from all the partners, along with the help of the Ibero-American Secretary General (SEGIB) and the Conference of Ministers of Justice from Ibero-America (COMJIB). Thanks to the mandate from various high profile heads of state, together we have been able to advance Ibero-American trade relations by offering arbitration in an Ibero-American unifying legal space.

With the start of a new term, the key objective now for CIAR is to become the primary center of arbitration in Ibero-America and for the CIAR arbitration clause to be used as a guarantee clause in terms of quality, independence and transparency as much as possible.

Arbitration for international trade is at the peak of its expansion, and all international arbitration institutions are trying to prepare themselves for this development. CIAR should be no exception.

CIAR has a clear vision that it must become the arbitration center that gives the right answers to parties involved in terms of quality, time and cost, transparency, diversity and ethical values entrenched within our society.

Although we must respond to the enormous expectations created by this, the challenge is not only to meet this expectation but also to ensure that lawyers, arbitrators, experts and companies have the same ideas. It is important to bear in mind that we are in the middle of a social economic and political international crisis, and this has forced us to have an even greater ability to adapt to different situations.

International trade arbitration has started to listen to businesses and is adapting to both criticism and demands; international trade arbitration has been very relaxed over the past few years but after the uncertainty of last year, keeping up to date with changes and placing an emphasis on the reality of the situation has been at the top of the priority list.

We always talk about the same keywords. Transparency, availability, a balance of time and costs. These key phrases, I believe, are the four pillars on which international trade arbitration ought to be based on.

When it comes to investment arbitration, I think we will be seeing a new, emerging picture. For example, the termination of the bilateral investment agreements (BITs) between the European Union member states came into force this year and the new framework is opening matters concerning conciliation and arbitration, the completion of Brexit, the appointment of a new president in the USA, the changes in the ICSID (International Centre for the Settlement of Investment Disputes) and the entry of new leaders, which will provide us with hours of examination and reflection. Nonetheless, we must stay vigilant. We will soon see if the state-investor balance will no longer be put into question.

As an arbitrator, how do you see the future of international arbitration?
To answer this question, it is important to be aware that global markets are international and are made up of many small parts and transactions between regions, so international investment trade relations will continue to increase over the coming decades. The existence of conflict is a direct consequence of both personal and trade relations and so the number of conflicts will inevitably increase.

For example, in 2020 the Court of the International Chamber of Commerce (ICC) recorded a total of 946 new arbitration cases due to the increase in smaller dispute cases, the highest number registered since 2016.

Despite the increase in cases, the ICC was able to adapt to the new circumstances, and in October 2020 it revised the new arbitration rules, which came into force on 1 January 2021. Not only will the number of cases increase, but the markets are becoming increasingly sophisticated, and as a consequence so are the disputes. There will be an increasing need for the leaders in the international arena to adapt to this.

Law firms and in-house lawyers will have to adapt in response to the increasing sophistication of their businesses, something that will affect experts and, of course, that will require arbitration centers and arbitrators to adapt too.

Each day the world evolves. Changes have been measured over thousands of years, then over five hundred years, then over centuries and finally over decades; now, the various pieces of the global economy can change radically in less than a year – blink once and everything has changed. The world of business and conflict resolution is no different. If you stop, everyone else has moved on and you are left not knowing how your markets work.

We talk about generation Z or X because of the changes between those born in the 2000s and those in the 2010s or the 1990s; there are differences in worldviews here, and therefore differences in views on business and conflicts.

Those of us who were born much earlier (in my case, 1968) have many advantages. The first is experience. To this day I believe there is no substitute for experience: it is accompanied by years of work, which cannot be replaced by youth.

The second is that we are conscious of the advantage we have. We are the link between the past and the future, so we must be able to adapt to and embrace change when it’s needed. That’s why I think now we should focus on one thing. 25 years ago nobody asked you if you worked, let alone as an arbitrator or a professional or even a lawyer. Today this is a common question, and within five years it will be in arbitration: are you an arbitrator or a part of a group of lawyers? To be an arbitrator you have to adapt to this complexity.

Be recognizable and honest with your capabilities, your availability and your neutrality. Being an arbitrator means that you need to be an expert in your area, have time to arbitrate, and have undoubtable impartiality and independence. I strongly believe that these values will remain the same for many years to come and I hope they inspire the next generation of arbitrators.